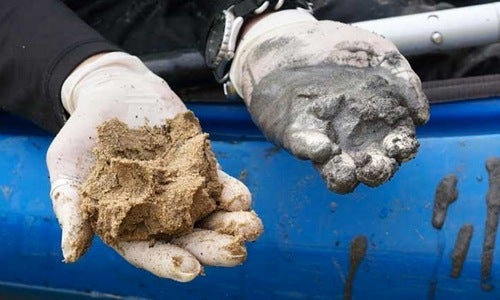 Consequences of Duke Energy’s massive coal ash spill into North Carolina’s Dan River last February are still being felt, as dozens of residents near the site have been warned by state officials Tuesday not to drink or cook with the water from wells after tests results showed toxic contamination, according to a report from the Associated Press.

Eighty-seven private wells near eight of Duke’s plants showed results that failed to meet state groundwater standards, the state’s Department of Environment and Natural Resources said. In documents received by the AP, test results showed readings for vanadium—a possible carcinogenic to humans, and a chemical linked to neurological and developmental problems in lab animals—as high as 86 times the state groundwater standard of 0.3 parts per billion.

This unsettling report comes after the U.S. Environmental Protection Agency and Duke both announced the cleanup’s completion in July.

The AP also reported that three Duke Energy employees supplied bottled water for some residents in November and allegedly told them to keep it secret from their neighbors.

“They asked us to not say anything,” Levene Mahaley, 83, who has lived near Duke’s Buck power plant since 1954 told the AP. “Just don’t mention it, that we’re getting water. I was surprised, but we didn’t ask any questions at the time.” Test results from Mahaley’s well showed readings for vanadium as high as 26 parts per billion.

When the AP asked Duke about the incident, spokeswoman Erin Culbert said the company was “not aware of any expectation” that the Mahaley residence was to stay quiet.

Example of what residents are getting in the mail about toxins found in well water near Duke coal ash ponds. @wsoctv pic.twitter.com/Wv1HXP4Ljf

Duke believes that chemicals found in the private wells are occurring naturally. “Based on the test results we’re reviewed thus far, we have no indication that Duke Energy plant operations have influenced neighbors’ well water,” the company said in a statement.

Environmental advocates, however, are crying foul. “For more than a year, Duke Energy has repeatedly denied even the possibility of drinking water contamination from its leaking coal ash dumps.” Pete Harrison a staff attorney for Waterkeeper Alliance told EcoWatch. “Now we’re learning that Duke has known at least since last October that toxic heavy metals associated with coal ash is showing up in the water people are drinking.”

Despite the test results and advice to not use the water for drinking or cooking, the Department of Environment and Natural Resources said the well water would still meet federal standards for municipal water supplies in nearly all cases.

“All the while, Governor McCrory’s administration has been complicit in sweeping this critical information under the rug, so it’s no surprise that his Department of Environment and Natural Resources is refusing to take control of the situation and ensure that all affected residents have clean, safe water to drink,” Harrison added.

How Breathing Coal Ash Is Hazardous to Your Health