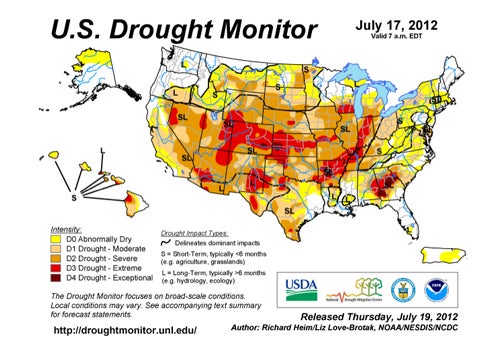 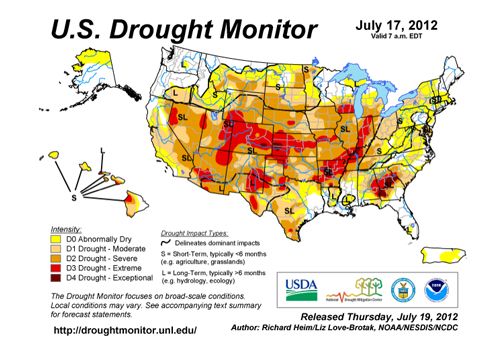 Corn and other feed crops from the Rocky Mountains to the Ohio River Valley continue to wither from the punishing sun and lack of rain. In turn, the nation’s livestock, pork and dairy producers have begun to incur higher prices for what is often their biggest expense—feed for their pigs and cattle.

“Based on current estimates, the corn crop is between 20 and 25 percent smaller than 30 days ago. That’s how much the crop has deteriorated in the last month,” said Mike Miller, a senior vice president at the National Cattlemen’s Beef Association. “With that, corn prices are up 50 percent. That increase in price input has an effect in beef and pork and poultry and into the energy complex. It’s really impactful.”

Livestock and dairy production occurs in all 50 states, with roughly 30 million beef cows and 9 million dairy cows in production. In 2011, the industry accounted for $44 billion in economic activity and $4 billion in exports, primarily to Mexico, Canada, Japan, Hong Kong and Taiwan, according to U.S. Department of Agriculture (USDA) statistics.

Miller said ranchers are currently absorbing the increased costs brought about by the ongoing extreme weather conditions. But, he added, if drought and heat continue to spoil crops and cut supplies over the long term, consumers are likely to see price increases.

“The long and short of it is, when we have these price shocks, the production system absorbs those costs,” he said. “If these increased input costs persist, what tends to happen is production levels decline. Then that’s the moment when they impact price levels. [For] six months to a year, the costs can be absorbed.”

Five states account for more than 50 percent of the total value of U.S. sales of cattle—Texas, Kansas, Nebraska, Iowa and Colorado—all of which are experiencing severe drought conditions and temperatures into the 90s and in some places topping 100 degrees Fahrenheit. Several of those states are top corn producers, as well.

Much of the livestock sector is located in the Midwest, where, according to Miller, farmers tend to have more feed resources available because they are in close proximity to corn and other feed producers. But the drought, he said, has forced ranchers to buy supplemental feed due to the increasing cost of corn and dwindling supply.

Supplemental feed—sometimes called distillers’ grain—is often made from the byproducts of ethanol or agricultural production. It could be soybean or corn husks and in some areas orange peels or cotton hulls. “[The prices for supplemental feed] tend to move in lockstep with that of corn,” Miller said. “My guess is distillers’ grains have probably gone up, as well.”

Corn prices have soared 50 percent since mid-June, in part due to shrinking crop yield projections by the Department of Agriculture.

“Everything I’ve seen, it seems like right now we’ve got the worst-case scenario,” Miller said.

Livestock producers are not the only ones who rely heavily on the nation’s supply of corn to feed their herds. So, too, do hog farmers, and they face many of the same consequences from the drought.

Michael Formica of the National Pork Producers Council said the cost of corn accounts for 80 to 85 percent of a producer’s cost. He expects USDA to continue scaling back estimates on corn production, which he called a “dire” scenario.

Much of the nation’s pork production is located in North Carolina and the Midwest. “The Midwest had the advantage,” Formica said. “If prices for corn are $8 a bushel, they pay $8 a bushel. North Carolina pays eight plus two for transportation.”

With corn supplies dwindling, that situation has reversed. Midwestern farmers are now having to find supplies from beyond the region, requiring additional shipping costs. Farmers in North Carolina, with its port in Wilmington, however, may gain an advantage due to their close proximity to corn imports.

“We’ve got large portions of the country where farmers are not able to get grain. And we’re going to be seeing more farmers going out of business,” Formica said. “There’s a lot of concern. We’re very, very worried that they’ll be impacts on other sectors, like wheat. Farmers are sourcing wheat instead of corn, which will impact the price of bread.”

Increases in the cost of pork might not hit consumers until next year, he speculated. Farmers might sell their pigs six months early this year, bringing about a drop in price because of an increase in supply. “But next year, those animals that come to market six months a year early aren’t there. A lot of people are going to be hit hard,” he said.

The extreme weather has more subtle impacts than shrinking grain supplies or a potential jump in the cost of a steak or pork chop.

Animals can suffer from a host of heat stress-related ailments that could decrease their production of milk or eggs and even result in death.

The heat wave and drought have been “devastating, absolutely devastating,” said Lance Baumgard, a professor of animal science at Iowa State University. “It’s two-pronged. It’s an animal welfare issue, and the effective production of the animal is compromised, not just for cows but pigs and chickens.”

As temperatures rise, cows, not unlike humans, tend to decrease their feed intake and undergo metabolic changes that cause an increase in the production of insulin and stress hormones. “So the animal goes into what is called a catabolic condition—a stressful condition—where it becomes interested in surviving and not lactating,” Baumgard said. Infection of the mammary glands and lameness are other health risks that are increased because of heat stress, he said.

As herd animals, cows often congregate close to one another, especially during times of stress. The warmth of their collective mass can further increase temperatures, though, and heighten the risk of sickness and of a decline in milk production.

“The combination of a shower of water on a cow with air to blow it off will cool a cow just like you or me,” said Thomas Overton of the Department of Animal Science at Cornell University. Covered barns or allowing cows to graze in shaded areas can also help, he said.

Baumgard estimates that each year, heat stress on cows costs farmers $3 billion. “The industry needs to develop a strategy that is pharmaceutical-, nutritional- and management-based in order to maintain animal welfare and productive capacity. If climate change continues, like the scientists tell us it is, the cost is in fact going to be bigger. So to deal with the risks is critically important.”

Secretary of Agriculture Tom Vilsack met with President Obama on July 18. At a press briefing afterward, Vilsack discussed the impact of the drought on agricultural producers and consumers but resisted connecting the ongoing extreme weather to climate change. “I’m not a scientist, so I’m not going to opine as to the cause of this,” he said. “All we know is that right now, there are a lot of farmers and ranchers who are struggling. And it’s important and necessary for them to know, rather than trying to focus on what’s causing this, what can we do to help them.”