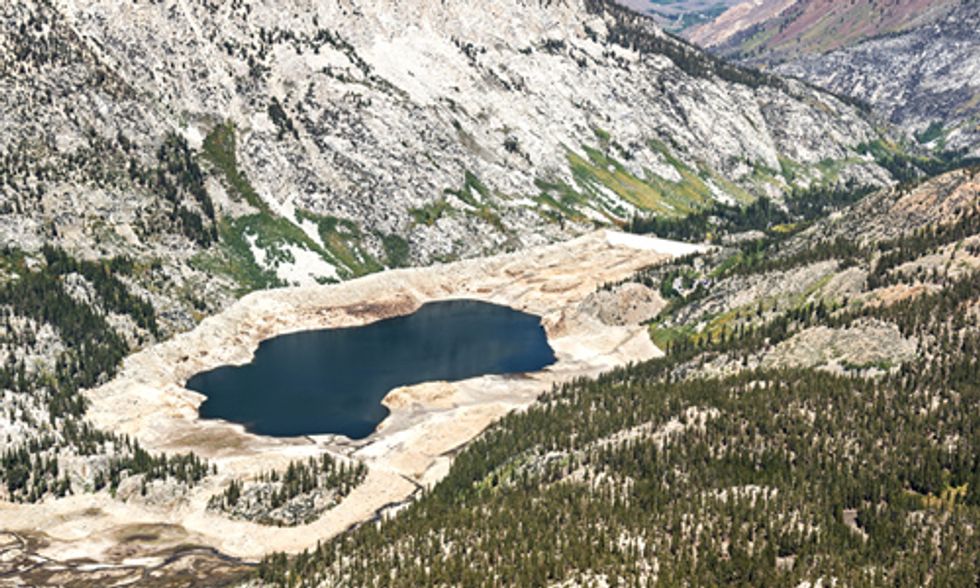 In an LA Times editorial published last week, Jay Famiglietti, senior water scientist at the NASA Jet Propulsion Laboratory, warned that California has about one year of water left. "Right now the state has only about one year of water supply left in its reservoirs, and our strategic backup supply, groundwater, is rapidly disappearing," said Famiglietti. "We're not just up a creek without a paddle in California, we're losing the creek too."

The water level is extremely low at a South Lake Tahoe reservoir because of the prolonged drought.
Photo credit: Shutterstock

The problem started even before the current mega-drought. "NASA data reveal that total water storage in California has been in steady decline since at least 2002, when satellite-based monitoring began, although groundwater depletion has been going on since the early 20th century," said Famiglietti. The NASA scientist says, first we need to have immediate mandatory water rationing statewide. Second, we need to accelerate the implementation of the Sustainable Groundwater Management Act of 2014, which establishes "groundwater sustainability agencies," but isn't doing it quickly enough. Third, "the state needs a task force of thought leaders that starts, right now, brainstorming to lay the groundwork for long-term water management strategies." Lastly, "the public must take ownership" of this crisis.

The op-ed naturally garnered a lot of attention and state agencies have started to respond. On Tuesday, the State Water Board tightened its watering restrictions, "telling urban agencies to limit the number of days residents can water their yards," said the LA Times. That kind of restriction is a mere drop in the bucket (pun intended), but the state agencies did warn they would impose tougher restrictions in the coming months if local agencies did not "ramp up conservation efforts," reports the LA Times.

Ed Schultz hosted Rep. John Garamendi, Paul Douglas, Peter Gleick and Scott Paul on The Ed Show last night to discuss the gravity of the crisis and how Republicans' denial of climate change could have irreversible effects.

"Record after record continues to be broken in this environment," says Schultz. "Severe temperature, severe storms, the snow numbers—unbelievable—droughts, fires, water prices are responding—you name it, it's happening." Meanwhile, the Republicans are staying the course with their climate denial, says Schultz.

Schultz highlights all of the major recent environmental news, including how California is responding to the extreme drought and how water prices have reached a record high in the state. He also talks about scientists' discovery of warm water troughs under the Antarctic ice sheet which are accelerating warming and China's plans to rapidly expand its solar projects in 2015.

Watch the clip below to see what Schultz thinks of the Republicans in Congress who still deny climate science:

President Obama: Some in Congress Are ‘Shills for the Fossil Fuel Industry’