Drought Shaming the Rich and Famous: Who Is California’s Biggest Water Guzzler? 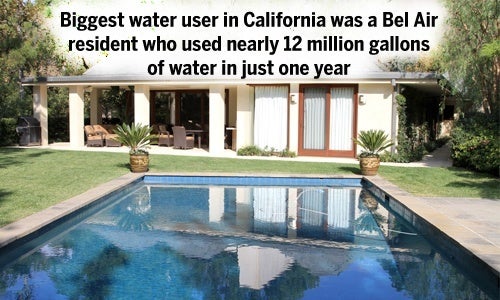 The Center for Investigative Reporting has outed California’s biggest residential water users in The Wet Prince of Bel Air: Who Is California’s Biggest Water Guzzler? The report, published earlier this month, found 365 California households each used more than 1 million gallons of water from April 2014 to April 2015.

“One million gallons is enough for eight families for a year, according to a 2011 state estimate, and many of California’s mega-users pumped far more than that,” says The Center for Investigative Reporting. “Of the total, 73 homes used more than 3 million gallons apiece, and another 14 used more than 6 million.” The biggest user used a shocking 11.8 million gallons of water. City Lab points out that’s as much water as 90 households use in an average year and enough water to fill 18 Olympic-sized swimming pools.

State officials would not reveal the names or addresses of these users out of privacy concerns. They would only give their zip codes. Bel Air tops the list with four of the five biggest water users in the state. The wealthy LA neighborhoods of Beverly Hills, Brentwood and Westwood round out the top 10.

“San Diego’s posh La Jolla beachfront community” and the “affluent suburbs of Contra Costa County in the Bay Area” also have a high concentration of what The Center for Investigative Reporting refers to as “mega-users.” 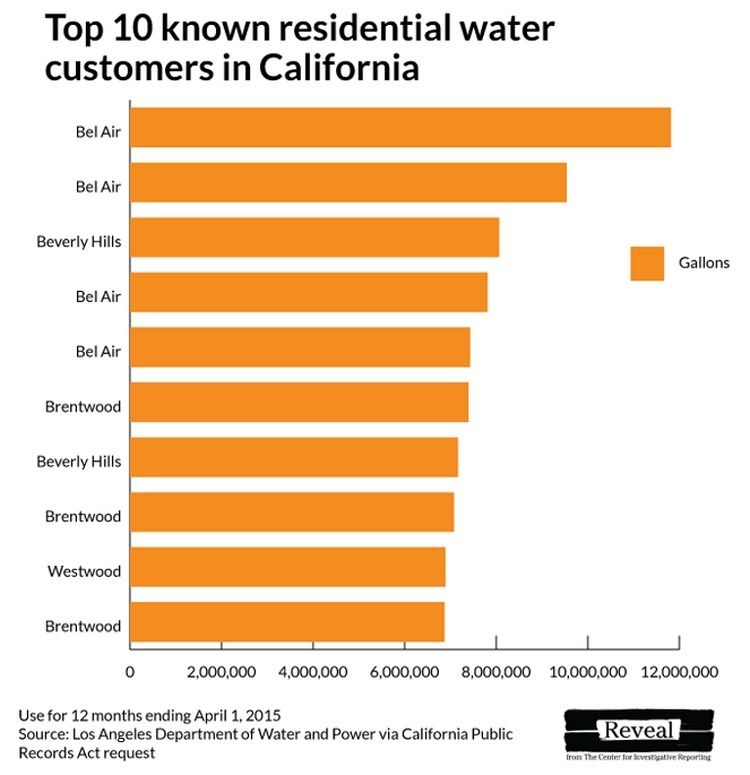 Bel Air is home to four of the five top water users in the state of California. Photo credit: The Center for Investigative Reporting

How is all of this profligate water use allowed in a drought? After all, in April Gov. Brown issued the state’s first-ever mandatory water restrictions.

“There’s no ordinance on the books in Los Angeles to go after an individual customer strictly for their use,” explains Martin Adams, senior assistant general manager for the water system at the Department of Water and Power. Only two water agencies in the state (one in Oakland, the other east of Los Angeles in the Coachella Valley) fine mega-users, according to The Center for Investigative Reporting.

As long as residents follow other usage rules (such as watering only on certain days and preventing run off into the street), they can use as much water as they can pay for. Needless to say, this has people up in arms. The biggest water users live in some of the most lavish neighborhoods in not just the state but the country. The Center for Investigative Reporting calls Bel Air “a lushly landscaped, mansion-studded enclave of wealth and celebrity.” It’s home to some big names, including Elon Musk, Nancy Reagan, Berry Gordy, Jennifer Aniston and Rupert Murdoch to name just a few. The only thing that people love more than drought shaming is drought shaming the rich and famous. 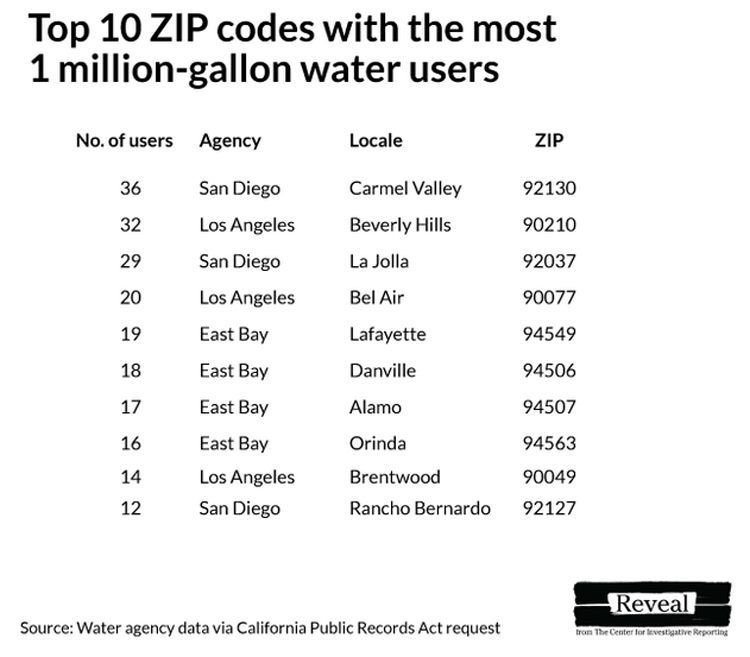 Not surprisingly, the wealthiest neighborhoods in the state are also home to some of the biggest water users. Photo credit: Reveal
featuredwater
EcoWatch Daily Newsletter
Related Articles from EcoWatch
Climate