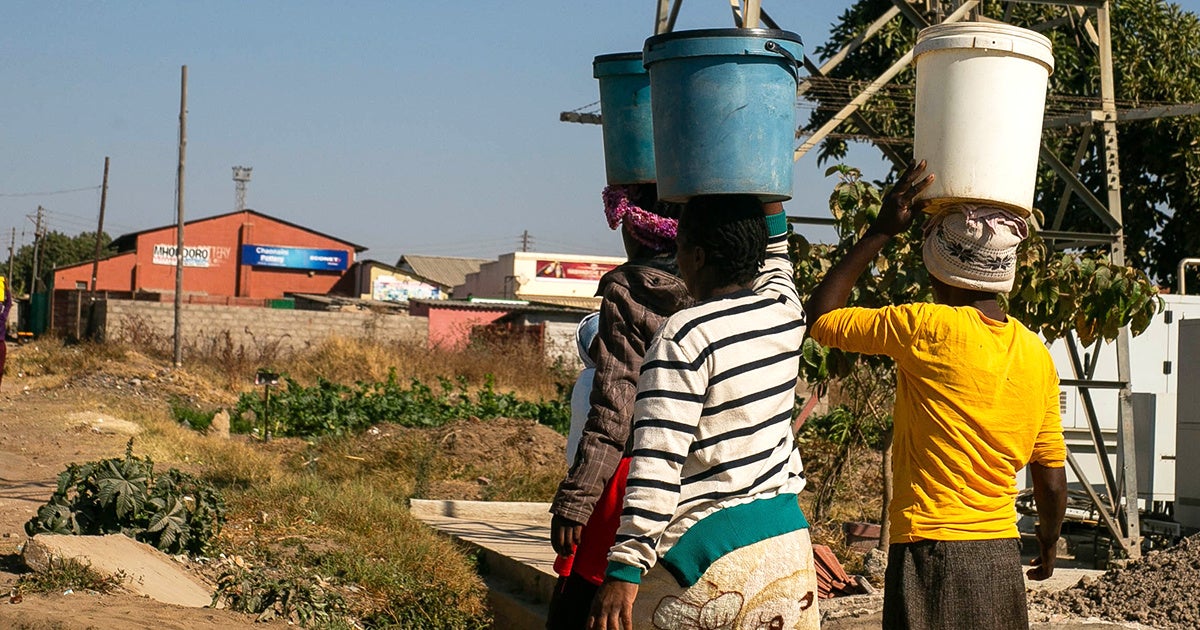 Women carry 20 liter containers of water in the streets of Mabvuku on Aug. 1 in Harare, Zimbabwe. Tafadzwa Ufumeli / Getty Images

Water is life. Without it crops won’t grow, clothes stay dirty and kids don’t bathe. And, life without water is a daily nightmare endured in Zimbabwe’s capital city, Harare, where more than two million people only have running water once a week, according to the New York Times.

The water shortage there means residents ration bathroom trips and stand in interminable lines to fill buckets and cans at communal boreholes. One mother profiled by the New York Times got in line at 3 a.m. By the afternoon, she was still standing in line.

The boreholes are a problem too since they are so polluted. “Water-borne diseases linked to these boreholes are on the rise, but people have had to take in their own hands water supply because the utility has failed to provide water,” said Jean-Marie Kileshye-Onema, network manager of WaterNet, as Climate Change News reported.

The water rationing started in June in the country’s two major cities, Harare and Bulawayo. The economics of water purification are also working against Zimbabwe. The city government has had to work a critical shortage of purifying chemicals, which cost in excess of million per month, according to CNN.

“We are using more chemicals and we have not been able to procure enough safe chemicals as a result, we are targeting to provide water to our residents with a minimum of once a week’ supply of the precious liquid,” said Mabhena Moyo, Harare’s Acting Water director, as CNN reported.

The shortage, which started in January but has been exacerbated in July, is due to an awful drought year from the climate crisis. Poor water management has also squandered the remaining water. An estimate of 45 to 60 percent of the water that’s left in Harare reservoirs is lost through leakage and theft, said Herbert Gomba, the mayor of Harare, as the New York Times reported.

“There is a rotational water supply within the five towns,” said Michael Chideme, Harare city council corporate communications manager, to Climate Change News. “Some people are getting water five days a week especially in the western suburbs, but the northern suburbs are going for weeks without a drop in their taps.”

The water crisis has raised fears of a cholera outbreak or other waterborne diseases, especially in areas where residents have lived without water for three months, said Community Water Alliance, an NGO, as CNN reported.

“We are looking at hygiene standards, service delivery and ablution system which requires water,” said Hardlife Mudzingwa of the Community Water Alliance Citizens to CNN. “Citizens have been greatly affected and the cholera hotspots are what we fear the most.”

The water crisis is emblematic of Zimbabwe’s dysfunction and the horrible infrastructure that long-time president Robert Mugabe left as a legacy before he was ousted from office in 2017. In addition to water shortages, residents of Harare deal with shortages of fuel, bank notes, and medicine. Inflation is at a staggering 175 percent, and daily blackout last 15 to 18 hours, according to the New York Times.

“It is a nightmare,” said Norman Matara, a physician and board member of the Zimbabwe Association of Doctors for Human Rights, a medical watchdog, as the New York Times reported. He has watched his patients skip medication because they can no longer afford it or take it once every three days instead of every day.