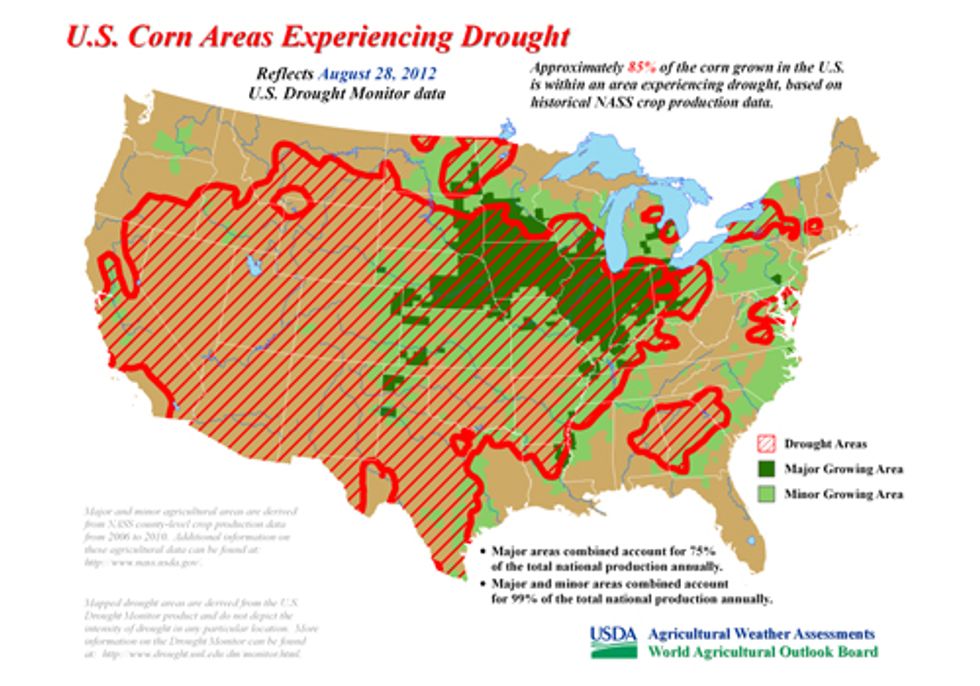 This summer, many parts of the U.S. are in the grips of an unrelenting record heat wave exacerbating drought conditions throughout most of the nation. Yesterday, a report by the U.S. Energy Information Administration (EIA) detailed the significant effects drought is having on corn production.

The U.S. Drought Monitor, a joint publication of U.S. Department of Agriculture (USDA) and the National Oceanic and Atmospheric Administration (NOAA), is currently reporting that large areas of the Midwest and Great Plains regions, which are substantial corn-producing areas, are experiencing significant drought conditions. Analyzing Drought Monitor data, the USDA's Agricultural Weather and Drought Update for Aug. 16 reported that 85 percent of the U.S. corn crop is located within a drought area, with nearly half of the crop area experiencing extreme or exceptional drought levels, their most severe designations. The map below illustrates the location of U.S. drought areas superimposed on major and minor corn-growing areas.

Initially, the USDA predicted this year would see the largest corn harvest in history. However, due to the extreme drought conditions in the corn belt some estimate that the actual yield of the U.S. corn crop will be as much as 30 percent lower than was initially forecast.

Though 98 percent of the U.S. corn crop is not consumed directly by humans, but is instead used for animal feed, ethanol production and other industrial uses, a huge amount of is consumed indirectly worldwide through beef, pork, poultry and dairy consumption. The U.S. corn crop accounts for 40 percent of the global harvest and an increase in the price of U.S. corn will be felt with an increase in food prices worldwide. These effects will especially be felt by poor people worldwide who subsist mostly on grain and eat little animal protein or dairy, because an upward spike in corn prices also leads to an increase in the price of the other "great grains" including rice and wheat.

Fear that higher food prices worldwide will lead to greater global political instability has led many to call for an end to U.S. government mandated policy that 40 percent of the U.S. corn crop must be diverted to ethanol production. Mandates to use corn as fuel heighten rises in food prices. The World Bank blamed expanded biofuels production as being one of the main causes of the global food crisis of 2008.

Most climate change experts predict that we are in for a future of more and more severe drought which will in turn lead to higher and higher food prices. What's more, according to a recent scientific study the severe drought conditions themselves inhibit carbon uptake, thereby worsening climate change, a vicious cycle. The five year drought from 2000 to 2004 in Western North America, the worst of its kind in 800 years, inhibited carbon uptake, contributing to global warming conditions, but scientists say that that may turn out to be among the wetter time periods compared to the climate of the recent of the 21st century.

A National Wildlife Federation report this week detailed the many ways in which climate change made its presence felt during this record hot summer. In addition to problems such as disease outbreaks and devastating wildfires, one of the main problems associated with climate change is drought. Some of the most dramatic effects of drought have been felt in the global food system.