Small Drones Could Be Better for Climate Than Delivery Trucks, Says Study 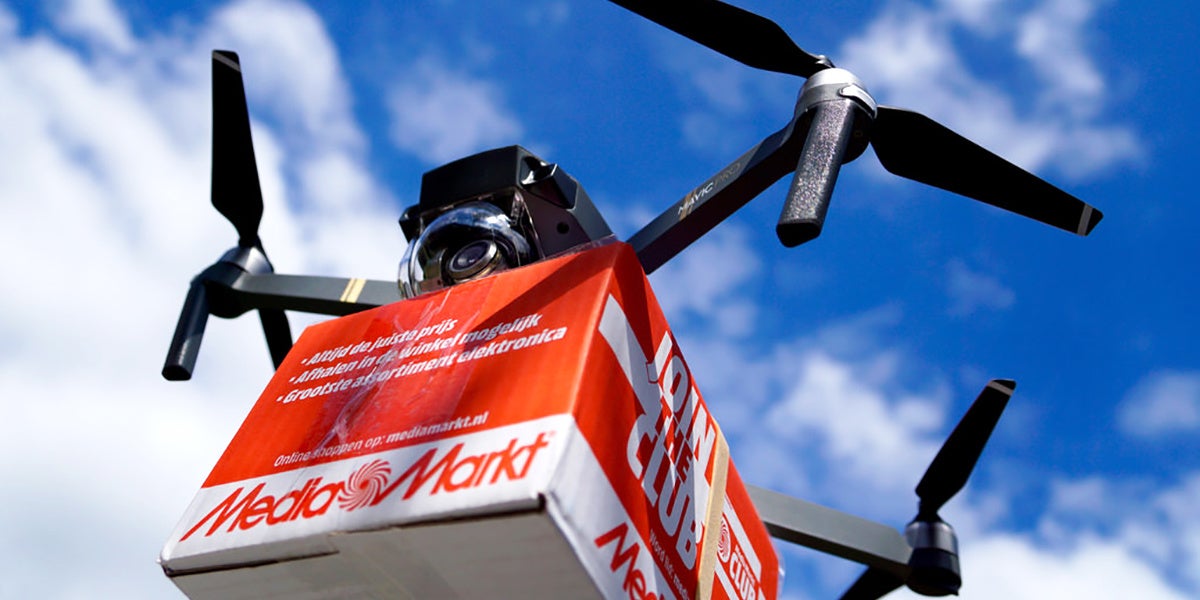 A new study in Nature Communications looks at the climate impact of a shift from truck-based to drone-based package delivery. It finds that while small drones carrying packages weighing less than 0.5 kg would reduce greenhouse gas emissions compared to diesel or electric trucks anywhere in the U.S., the same is not true for larger drones carrying heavier packages.

The cost of drones has fallen dramatically over the past decade. At the same time, improvements in battery energy storage and a reduction in battery costs have led to drones that can fly much larger distances. Advances in automation and computer vision has made it possible to conceive of drones that could deliver packages to individual homes without requiring a human operator.

The combination of these factors has led companies—including Amazon, Google, UPS, DHL and others—to start developing programs for drone-based delivery of packages. Due to their fast delivery speed, drones are a natural fit for same-day delivery of orders, something that a number of different companies have been pursuing in recent years.

While the commercial use of drones is strictly regulated today, both the U.S. Federal Aviation Administration and the European Aviation Safety Agency are developing regulations to allow the use of drones for delivery purposes.

Current in-city delivery of packages is primarily via diesel trucks in both the U.S. and Europe. Some companies are piloting electric delivery trucks. While their deployment to date has been fairly small, they are expected to take a larger market share in the future.

In most prototype programs developed by companies so far, the drones used for delivery have been relatively small battery-powered quadcopters or octocopters. These drones can only fly for around 10-15 minutes before their batteries are exhausted, limiting the range in which they can deliver packages.

The new study looks at the climate impacts of two specific types of drones: small quadcopters capable of transporting 0.5kg and large octocopters that can carry up to 8.1kg. Both types of drones are capable of carrying a single package up to 4km and returning to refuel before their battery runs out.

The limited range of drones compared to traditional diesel delivery trucks would require companies to build many drone-enabled warehouses in locations close to customers. The authors of the new study suggest that this would increase direct energy use by these additional warehouses, as well as require additional deliveries to these distributed warehouses.

Example of optimal warehouse locations to supply most of the city of San Francisco (left map) and greater San Francisco Bay Area (right map) assuming a small quadcopter with a range of 3.5km. Taken from Figure 3 of Stolaroff et al 2018.

All types of delivery drones are much more efficient per mile travelled than diesel trucks. However, delivery trucks generally do not carry only one parcel. Thus, the energy used per package is considerably smaller. The researchers point out that “delivery trucks carry many packages, delivering on average 0.94 packages per km (1.51 per mile), and their impacts need to be allocated per package.”

To account for this, the authors calculate the total greenhouse gas (GHG) emissions in grams of CO2-equivalent (CO2eq) per package from small drones, large drones, diesel trucks, natural gas trucks, electric trucks and petrol vans. They further examine how these findings vary across the different electricity generation mixes found in the U.S. You can see their main results in the figure below. 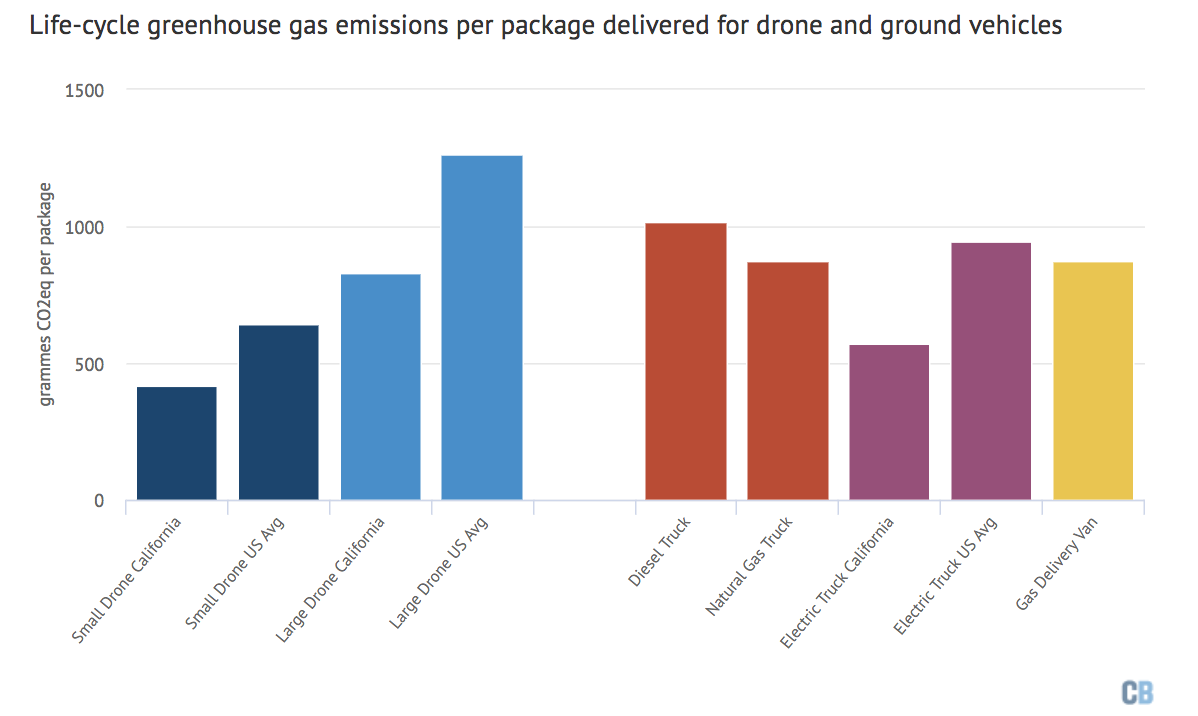 The authors find that small drones that carry packages lighter than 0.5kg have the lowest overall GHG emissions of any delivery system they examined. This is true both in places such as California (where electricity is relatively low-carbon), for the U.S. average grid mix and for areas of the U.S. with the most carbon-intensive electricity.

Small drones result in a 50 percent reduction in GHG emissions per package delivered compared to diesel trucks in California and 37 percent less carbon than diesel trucks on average across the whole U.S. In Missouri, which has among the most carbon-intensive electricity in the country, small drones still result in a 23 percent reduction in emissions.

If it is assumed that the alternative to drone delivery is electric delivery trucks rather than diesel trucks, small drones reduce GHG emissions by 26 percent in California and 33 percent for the whole U.S. Interestingly, for the current U.S. electricity grid mix, electric trucks result in about the same emissions as diesel trucks.

The picture is quite different for large drones, which carry packages up to 8.1kg. While they still reduce emissions in “low-carbon” California, they only result in a 9 percent reduction compared to diesel trucks. In the U.S. as a whole, their emissions are actually 24 percent. This will change in the future as the U.S. grid mix becomes cleaner.

In general, drones have a large potential for reduced transport emissions, while potential carbon reductions for diesel vehicles are more limited.

Breaking Down the Sources

The paper further breaks down emissions from each delivery option based on the portion that comes from transporting the packages, energy used for storing packages in warehouses, and the producing batteries used in drones and electric trucks.

The figure below shows the breakdown for various delivery options for the average U.S. grid mix. 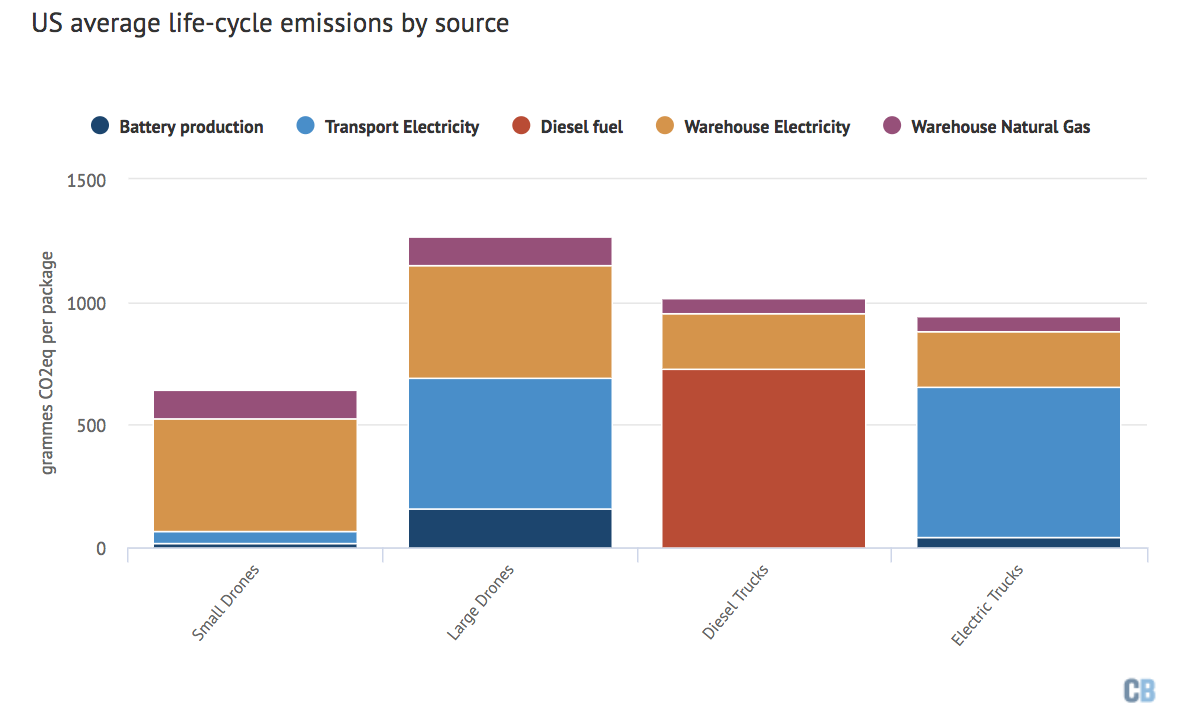 Greenhouse gas emissions (in grams CO2eq) per package by source for a subset of different delivery methods. Adapted from Figure 5 of Stolaroff et al 2018.

While reducing the carbon intensity of electricity generation would reduce both large drone and electric truck emissions compared to diesel trucks, the authors say there is little reason to prefer large drones over electric trucks for package delivery due to the extra warehouse-related emissions that large drones require.

As Dr. Costas Sampras, the director the Center for Engineering and Resilience for Climate Adaptation at Carnegie Mellon University and one of the authors of the paper, told Carbon Brief:

“Our research finds that small package delivery by drones likely has lower GHG emissions than diesel trucks, even when accounting for the potential additional warehouse space needed. For larger packages, we found that it’s probably better to use electric vans or electric trucks rather than large drones.

However, if warehouses to support urban drone delivery are constructed, they are likely to be used by both small and large drones—presenting a challenge for reducing GHGs from package delivery.

To maximise the climate benefits, firms should focus on smaller drones and an electrified ground fleet, while policy makers should focus on continued decarbonisation of electricity, as well as improved energy efficiency in buildings.”