Which Is Healthier? Whole Milk or Low-Fat Milk 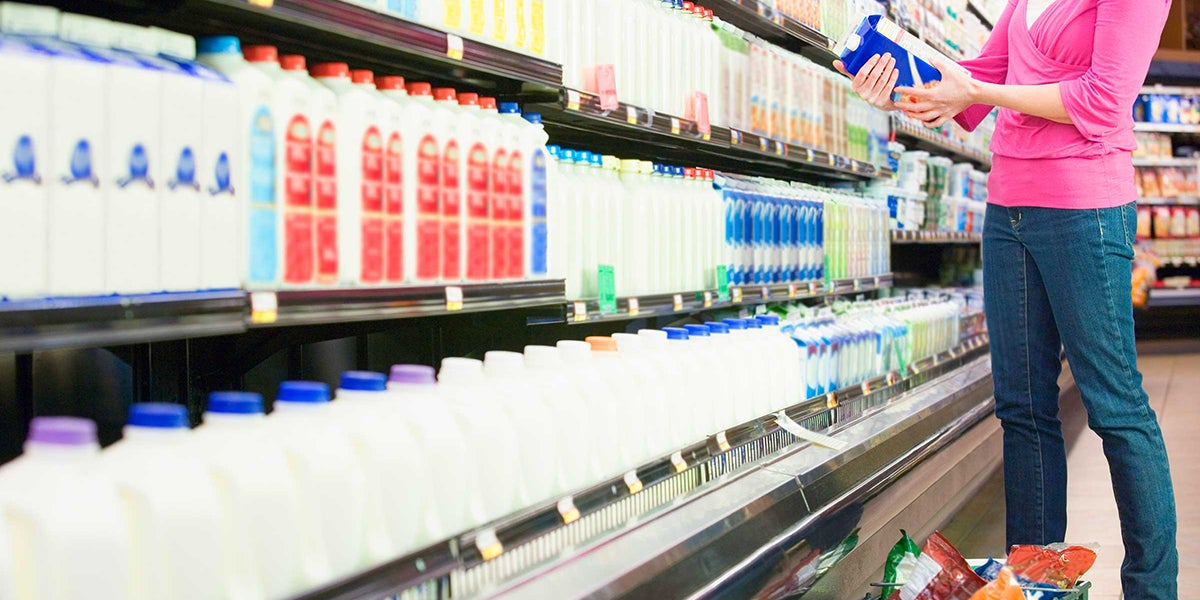 Milk is one of the most nutritious beverages on the planet.

That’s why it’s a staple in school lunches and is a popular beverage for people of all ages. 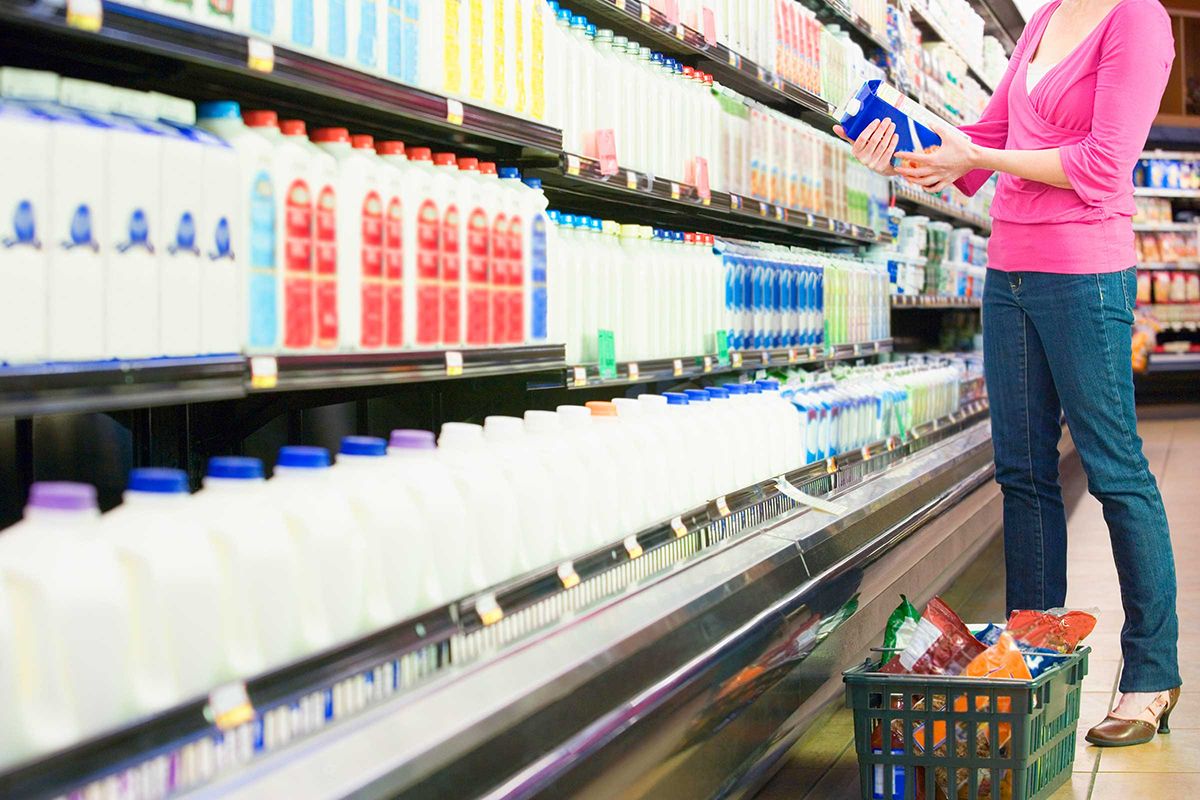 There are several types of milk available in the dairy aisle of most grocery stores.iStock

For decades, nutrition guidelines have recommended only low-fat dairy products for everyone over the age of two (1).

However, in recent years scientists have called that recommendation into question.

Recent studies suggest that skim might not always be the healthiest option when it comes to milk.

There are several types of milk available in the dairy aisle of most grocery stores.

They mainly differ in their fat content. Whole milk is sometimes referred to as “regular milk” because the amount of fat in it has not been altered. Skim and 1 percent milk are produced by removing fat from whole milk.

Fat content is measured as a percentage of the total liquid, by weight.

Here are the fat contents of popular milk varieties:

This table summarizes the nutrients in one cup (237 ml) of several milk varieties:

Vitamin D is another nutrient that can differ depending on the fat content. It’s a fat-soluble vitamin, so in milk it’s naturally present only in the fat. However, most milk manufacturers add vitamin D to milk, so every type has a similar vitamin D content.

As you may have noticed, one of the most significant nutritional differences between the milk varieties is their omega-3 content.

Omega-3 fatty acids have been linked to many health benefits, including improved heart and brain health and a lower risk of cancer. The more fat a cup of milk has in it, the higher its omega-3 content (5, 6).

Additionally, studies have shown that organic whole milk contains an even higher amount of omega-3s than regular whole milk (7).

Bottom Line: The major difference between the types of milk available is their fat content. Whole milk contains more fat and calories than skim milk.

For years, nutrition guidelines have been instructing people to avoid whole milk, mainly due to its saturated fat content.

Based on this information, experts made the assumption that saturated fat must increase the risk of heart disease. However, there was no experimental evidence to prove that this was true (8).

In the 1970s, public policy was adopted based on this assumed connection between saturated fat and heart disease. As a result, official guidelines instructed people to reduce their saturated fat intake.

A cup (237 ml) of whole milk contains 4.6 grams of saturated fat, which is about 20 percent of the daily amount recommended by the 2015 Dietary Guidelines for Americans (1).

For this reason, the guidelines recommend consuming only low-fat or skim milk (2).

In recent years, this recommendation has been called into question. There is now plenty of experimental data to indicate that eating saturated fat does not cause heart disease (8).

Bottom Line: In the past, whole milk was considered to be unhealthy because of its saturated fat content, but recent research does not support this recommendation.

Do You Really Need to Fear Saturated Fat?

There is very little scientific evidence that suggests you should be avoiding saturated fat in your diet (9, 10).

In fact, a review of 21 studies concluded that there is no significant evidence that saturated fat increases the risk of heart disease (11).

However, the relationship between saturated fat and cholesterol is more complicated than that.

Saturated fat does increase your blood levels of low-density lipoprotein (LDL) cholesterol, which is known as “bad” cholesterol.

But what is often ignored is that saturated fat also raises levels of high-density lipoprotein (HDL) cholesterol, the “good” cholesterol. HDL has a protective effect against heart disease (8, 12).

Additionally, not all LDL is dangerous.

There are different types of LDL and it’s the very small, dense particles of LDL that have the most damaging effects on the heart and arteries (13, 14, 15, 16, 17).

Bottom Line: There is no solid evidence that saturated fat increases the risk of heart disease. Saturated fat does increase LDL, but not the most damaging type of LDL. It also raises good HDL levels.

Drinking Whole Milk May Actually Help You Manage Your Weight

Many people avoid drinking whole milk because they assume the extra fat and calories will cause them to gain weight.

Interestingly, the opposite is probably true. Many studies have shown that consuming high-fat dairy products, such as whole milk, may actually help prevent weight gain.

In one review, 11 out of 16 studies found an association between consuming high-fat dairy and a lower risk of obesity (20).

One very large study noted that women who consumed the highest amounts of high-fat dairy products were the least likely to become overweight over time (21).

Another study of 1,782 men found that those who had a high intake of high-fat dairy products had a 48 percent lower risk of developing abdominal obesity, compared to men who had a medium intake.

In the same study, the men who had a low intake of high-fat dairy products had a 53 percent higher risk of abdominal obesity (22).

This is significant because abdominal obesity, in which fat accumulates around the waistline, may be the worst kind of weight gain.

Studies have found that having fat around your middle majorly increases your risk of dying from heart disease and cancer (23, 24).

The relationship between milk and weight management has been a topic of research for several years and findings have been inconsistent.

However, most of these studies either include all types of dairy products or focus on low-fat dairy (25, 26, 27).

In studies that look at only high-fat dairy products, like whole milk, there is a pretty consistent connection between high-fat dairy and lower body weight.

A study of nearly 20,000 women found that those who consumed more than one serving of whole milk per day were 15 percent less likely to gain weight over a period of nine years than women who drank no milk or low-fat milk (28).

Bottom Line: People who drink whole milk tend to weigh less. There is no evidence that drinking whole milk instead of skim will make you gain weight.

Whole Milk May Lower Your Risk of Chronic Disease

Not only is there no scientific evidence proving that the saturated fat in whole milk causes heart disease, but several studies have shown that drinking whole milk is associated with health benefits.

Multiple studies have shown that drinking whole milk is associated with a lower risk of metabolic syndrome.

Metabolic syndrome is the name given to a group of risk factors, including insulin resistance, abdominal obesity, low HDL levels and high triglyceride levels.

When these risk factors are present together, your risk of diabetes and heart disease is high (29).

The fatty acids in whole milk are likely responsible for its health benefits.

In one large study, people with the highest amount of dairy-derived fatty acids in their bloodstreams had a 44 percent lower rate of diabetes than those with the lowest amount (32).

Drinking whole milk may have other notable benefits including increased fertility and a lower risk of colon cancer. However, the evidence is not strong (33, 34).

Bottom Line: Drinking whole milk may actually have some health benefits, including lowering the risk of metabolic syndrome.

The Main Advantage of Skim Milk Is Its Lower Calorie Count

There are some situations where skim milk may be the best choice for your diet.

If you’re following a very-low-calorie diet, for example, the extra 63 calories you will get from drinking a cup (237 ml) of whole milk instead of skim might be more than you can afford.

Skim milk also offers the advantage of being a relatively low-calorie source of protein. Both whole milk and skim milk contain around 8 grams of protein per cup.

Skim milk is “nutrient-dense,” meaning it provides a large dose of vitamins and minerals with very few calories.

In fact, skim milk is one of the richest food sources of calcium, providing around 300 mg per cup. This is even higher than the calcium content of whole milk, which is 276 mg per cup.

If you need to boost your calcium intake but can’t afford a lot of additional calories in your diet, skim milk is the way to go.

Bottom Line: Skim milk provides all the protein and calcium that whole milk does, but with significantly fewer calories.

The recommendation to avoid whole milk may have been popular in the past, but it isn’t supported by science.

There may be some circumstances where skim milk is the best choice, but for most people, whole milk offers clear nutritional advantages over skim and low-fat milk.

Drinking whole milk on a regular basis may help you manage your weight over time and lower your risk of metabolic syndrome.