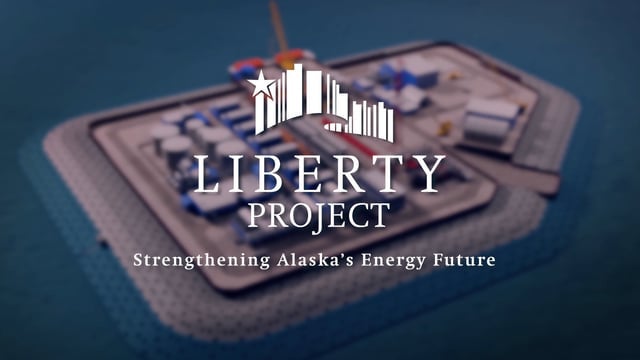 The Liberty Project has posted a video about its proposal to build the nation’s first oil production platform in federal waters in the Arctic.

The video was quietly uploaded two months ago and shows Hilcorp Alaska’s plan to build an artificial gravel island and undersea pipeline for its offshore drilling project in the Beaufort Sea. Frankly speaking, the five-minute clip—with its all-American voiceover and electric guitar riffs—is something you’d expect from a pickup truck commercial.

According to the Associated Press (AP), the man-made island—located 5.6 miles off shore—would consist of a 24-acre base on the ocean floor that’s about the size of 18 football fields. It will have sloped sides that lead to a work surface of 9 acres, or about seven football fields, allowing room for 16 wells, including five to eight conventional production wells.

Hilcorp estimates it could extract up to 70,000 barrels per day for a total recovery of 80 million to 150 million barrels over 15 to 20 years.

Hilcorp insists that it is committed to safety and its technology is sound, but environmental groups have warned about the company’s record in Alaska, including its months-long gas leak in its underwater pipelines in Cook Inlet in the Spring.

Previous Arctic project studies have also warned that offshore drilling in those remote, treacherous waters carries a 75 percent chance of a major oil spill, noted the Center for Biological Diversity.

But proponents of the project have pointed out that Liberty would be the 19th artificial drilling island in Alaska, including four that are already pumping oil from state waters.

Federal regulators are currently taking public input on the Liberty project. The comment period ends on Nov. 18. The AP reports that the final decision lies with Interior Secretary Ryan Zinke.