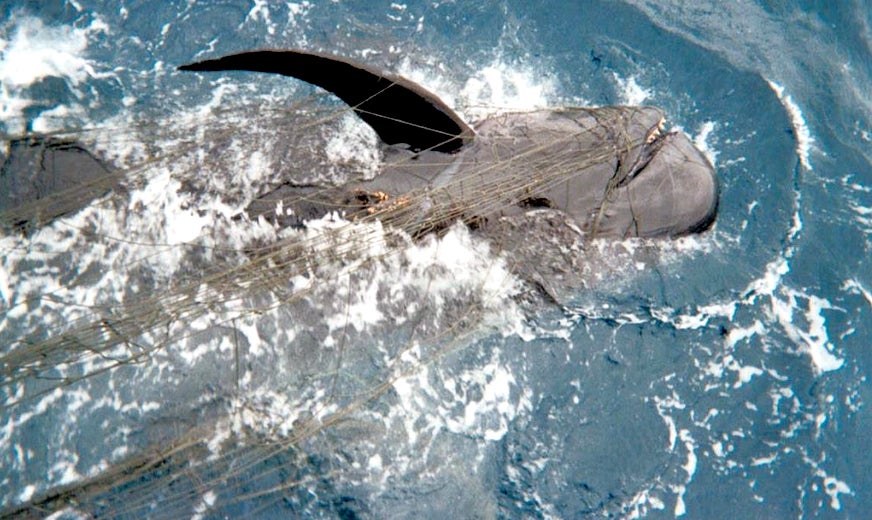 The new federal administration withdrew a proposed rule Monday that would have protected endangered species—including whales, dolphins and sea turtles—caught and killed in the drift gillnet fishery targeting swordfish off California. Monday’s decision demonstrates the administration’s blatant disregard for recommendations of its own fishery advisors and reverses course on commitments made by the previous administration.

In September 2015, after a years-long process incorporating input from fishery stakeholders, the Pacific Fishery Management Council recommended that the National Marine Fisheries Service set hard caps on the incidental catch of nine endangered species most at risk from entanglement, injury and death in mile-long drift gillnets that target swordfish off California.

The hard caps would have applied to endangered fin, humpback, and sperm whales, short-fin pilot whales and common bottlenose dolphins; as well as endangered leatherback, loggerhead, olive ridley and green sea turtles. The swordfish drift gillnet fishery is the only Category I fishery off the entire U.S. West Coast—a designation reserved for fisheries with high mortality to marine mammals.

“The Trump administration has determined not to issue regulations implementing a decision made by federal fishery managers more than a year ago to protect some of the ocean’s most iconic and endangered marine animals,” Geoff Shester, Oceana’s California campaign director and senior scientist, said. “In doing so, the National Marine Fisheries Service ignores the will of its federal fishery advisors, the State of California, California State and Congressional members, and the more than 22,000 members of the public who weighed in to support these caps.

“Rather than taking the opportunity to improve the swordfish drift gillnet fishery, the administration is side-stepping its obligation under the nation’s fisheries law to reduce the unintended catch (bycatch) of dozens of marine wildlife species, including those most vulnerable to entanglement and death in swordfish drift gillnets. Today’s rule provides further evidence that fishery managers must phase out the use of harmful drift gillnets and expedite authorization of deep set buoy gear to catch swordfish—a gear type that has proven to profitably catch swordfish without catching endangered species.”