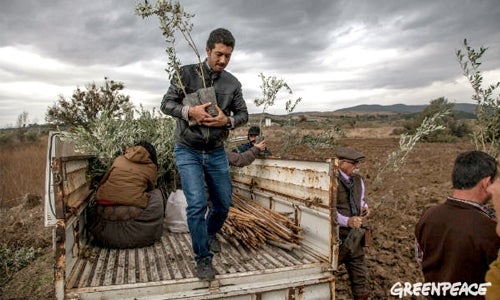 The community of the western Turkish village of Yirca has experienced a roller coaster of sadness and elation in recent days, winning an important court battle against a coal project but losing 6,000 valuable olive trees.

Just hours after bulldozers from Turkish construction firm Kolin Group flattened the trees to make way for a coal-fired power plant, a Turkish court unanimously declared the project illegal. The resulting publicity from the people-powered lawsuit also saw the Turkish government publicly distance itself from the controversial project. 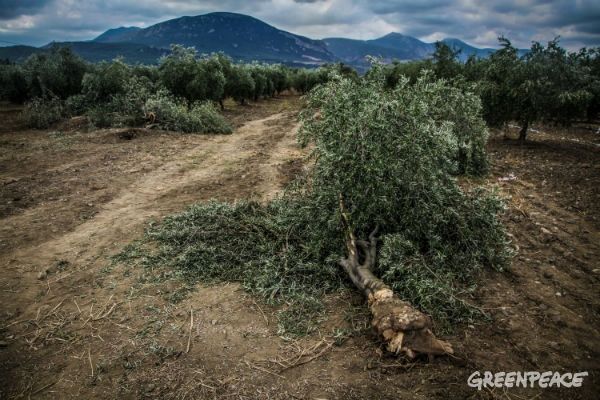 It was the culmination of an intense three-week period that started on October 21 when Yirca villagers and Greenpeace Mediterranean activists were brutally attacked for trying to protect the trees and prevent construction of Kolin’s proposed 510-megawatt coal-fired power plant.

Villagers had been holding nightly vigils to protect the olive grove since then and last Thursday night they were again confronted by security guards employed by Kolin. Villagers were assaulted and detained and then the bulldozers rolled in, destroying the entire grove.

The villagers’ sadness and tears of failure soon turned to elation, however, when a Turkish court ruled on Friday, Nov. 7, in favor of the Yirca people and a lawsuit lodged by Greenpeace Mediterranean. The ruling declared the company’s attempt to expropriate the land was without legal basis.

The full extent of the ruling only became clear on Monday, Nov. 10, however, when the court explained the rationale of its ruling, stating that Turkey’s national olive grove protection law forbids the company from building the power plant at the proposed site.

The court also ruled that the decision cannot be appealed under current regulations.

The ruling is an important step in protecting the environment against irresponsible energy investments. Urgent measures need to be taken so that the events in Yirca are not repeated in other parts of the country.

The ruling is a vindication of the actions taken by the village and Greenpeace Mediterranean in the face of intimidation and the unlawfulness of the company’s attempted land grab. 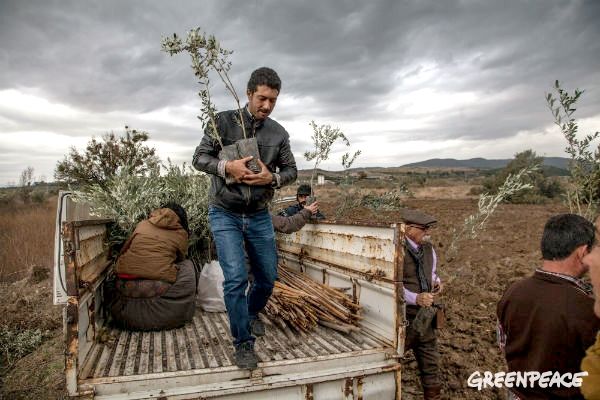 In recent weeks, Kolin’s security staff had fenced off the olive grove, raiding it by night to cut the trees down before the court had even had a chance to hand down its ruling. The situation escalated on Thursday night when the remaining trees were destroyed.

Still saddened but backed by the court ruling, villagers started to replant trees over the weekend with the help of Greenpeace Mediterranean.

As the fall-out from Kolin’s reckless actions continued, Turkish Deputy Prime Minister Bülent Arinç said the country “cannot forsake the environment for the rules of wild capitalism,” adding that “while the country needs energy, it also needs the trees.”

It was a significant acknowledgement of the importance of Turkey’s olive groves in a country that is already the world’s fourth largest olive producer and has plans to become the world’s second biggest in 2023.

Although existing legislation protects olive groves from industrial development, Kolin’s coal project sought to bypass the law with an “urgent expropriation” decision from the government’s Council of Ministers.

But the Yirca villagers and Greenpeace Mediterranean knew that the law was on their side and that their legal battle was just and legitimate.

Companies like Kolin are a threat to the idea that sustainable energy development doesn’t have to come with a price—in this case the olive groves of Yirca and the livelihood of the community.

In a region already suffering badly from dirty coal energy, from dangerous mining to air pollution that is killing thousands of people across Turkey, it is alarming to think there are plans to build another 80 coal-fire powered plants across Turkey.

It means the battle at Yirca is only the first of many more.