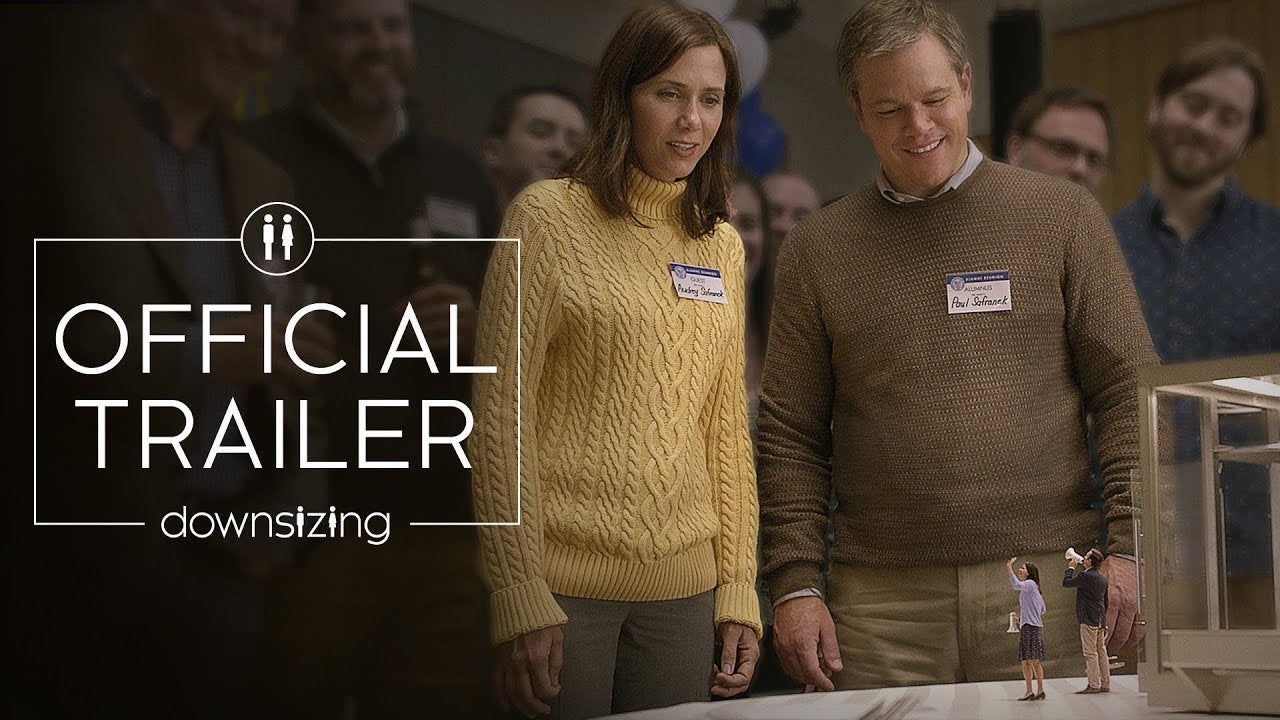 There are several reasons climate communicators and activists, and not just cli-fi aficionados, could benefit by seeing Downsizing, the end-of-2017 movie starring Matt Damon and directed by Alexander Payne—to be released March 20 on disk.

2. Rarer still, Downsizing is a comedy, a useful quality not often found in climate change communications.

3. Several members of the cast and crew have been Academy Award nominees; three have Oscars on their mantels. Hong Chau, was nominated for the Golden Globe and Screen Actors Guild awards for her supporting performance in the film.

4. Downsizing raises an important point for discussion: What is the human(e) response to climate change, to predictions of climate disasters in particular?

The first lays out the premise of the movie. A group of Norwegian researchers has figured out a way to dramatically reduce humanity’s ecological/carbon footprint: reduce the actual footprint of the average human being to less than half an inch.

The Norwegians make their research public at a conference on human scale and sustainability, where they reveal that 36 volunteers had undertaken the downsizing process and were now living in a miniaturized community monitored by the lab.

Watching a TV news account of the conference at a bar near his home in Omaha, Paul Safranek (Matt Damon), an occupational therapist who treats workers at a meat-processing plant, is amazed. Some months later, at a college reunion, he meets someone who has undergone the process.

“You can really make a difference,” Paul exclaims, recalling the Norwegian announcement.

“You mean all that crap about saving the planet?” his friend responds. “Downsizing is about saving yourself. You live like kings!”

Downsizing is at its best in these wry scenes depicting American entrepreneurs transforming a process designed to reduce environmental impacts into a way of living large on a small budget. As a sales counsellor at one of the communities created for “small people” explains, “In Leisureland, your $52,000 translates to $12.5 million.”

Paul Safranek and his still hesitant wife decide to downsize themselves. In the final scenes of this first part, Downsizing shows them preparing for the process, which is never explained.

Miniaturizing Oneself and One’s Carbon Footprint

The second part of the film begins when Paul wakes up, alone, in Leisureland. At the last moment, his wife had changed her mind. Their mini-mansion now seems empty, pointless and, after their divorce, unaffordable; so Paul moves into a small apartment and takes a job as a customer service representative in a small world call center.

Then Paul meets his upstairs neighbor, Dusan Mirkovic, and the disabled women who cleans his loft apartment, Ngoc Lan Tran (Hong Chau), a Vietnamese dissident who had been forcibly downsized and who had then lost her left leg during her escape from her miniaturized prison.

And after a wild party there is a lot to clean up, including the inexperienced Paul, who wakes up on the carpeted floor amidst the spills and cheese crumbles. Noting Ngoc’s ill-fitting prosthesis, Paul offers to adjust it, but then damages the limb in the process; Ngoc insists that he help her until a replacement is available.

Paul discovers that Ngoc’s business is as much about collecting left-over food and expired drugs as it is about cleaning residences. Everything she collects is then distributed to sick and disabled people living in the tenements with her. There is poverty in Leisureland.

Moved but also exhausted by his work for Ngoc, Paul accepts Dusan’s invitation to join him on his next business trip—to the first community of small people in Norway. Ngoc decides she will come, too.

The trip to Norway makes up the final part of Downsizing, with the film cutting to a scene of the small people on a small boat on a Norwegian fjord.

En route on the water, the working relationship between Paul and Ngoc ripens into a romance.

When they meet the Norwegian small people, two leaders inform Paul, Ngoc, and Dusan that they are now preparing for the worst.

“The methane hydrates in Antarctica are now melting. There will be another extinction. Earth will purge itself of the human species.”

In response, the Norwegians have created a subterranean “Noah’s Ark for small people” from all over the world, powered entirely by renewable geo-thermal energy and stocked with all they will need to sustain themselves there.

Paul feels drawn to this civilization-saving mission. “The future of humanity,” he tells Ngoc and Dusan, “is down that hole!”

But Dusan is skeptical, even mocking: “They’re a cult. They’ll go extinct long before we do.” And Ngoc worries about the poor and disabled small people she cares for in the tenements; she refuses to enter the cave.

The choice Paul faces is one of the messages Downsizing might deliver to climate-concerned viewers.

The first message, corresponding with the first part of the film, highlights the human propensity to keep ratcheting-up consumption even as one makes “green” choices. If a new technology makes possible lighter and more energy-efficient TVs, then bigger TVs are made and eagerly purchased. The results may not everywhere be as a crass as in Leisureland, but the impulse is not unique to Americans.

The way to counter this ever-expanding consumerism, the second part of the film seems to argue, is by fostering deeper human connections and reducing gross inequalities. Broadly applied, this message implies that humans will not prevent dangerous climate change without also addressing longstanding social and environmental injustices.

The third message is trickier, more troubling, and open-ended: Can humanity or civilization really be saved by sealing a remnant in a shelter? But if not, is the film’s writer/director arguing that everyone should go down with the ship, so to speak?

Downsizing thus poses a tough question for viewers: What is the human(e) response to dire predictions of climate change? What are we to do if we don’t do enough to avoid dangerous climate change?

A fourth message might be imagined from the reactions to the coincidental fact that Downsizing opened in the U.S. just before Norway’s prime minister made a state visit to Washington. It was that visit that seems to have prompted President Trump’s unexpected response to a bipartisan proposal on immigration: “We should have more people from Norway.”

According to Jostein Matre, a DC-based reporter for the Norwegian newspaper Verdens Gang, Trump’s comment drew a brusque—thanks, but no thanks—response in Norway: “Why would Norwegians with things like free health care and free education move to the U.S.?”

Could this also be the reason that the Norwegians in Downsizing were not tempted by Leisureland’s “live-large-by-being-small” promotions? Might making it possible for people not to think, obsessively, about health care costs and college loans make it easier for them to think more realistically about climate change?

If so, then the final message climate activists and communicators might take away from Downsizing is this: Don’t get small; get socialized. Bernie Sanders would approve.