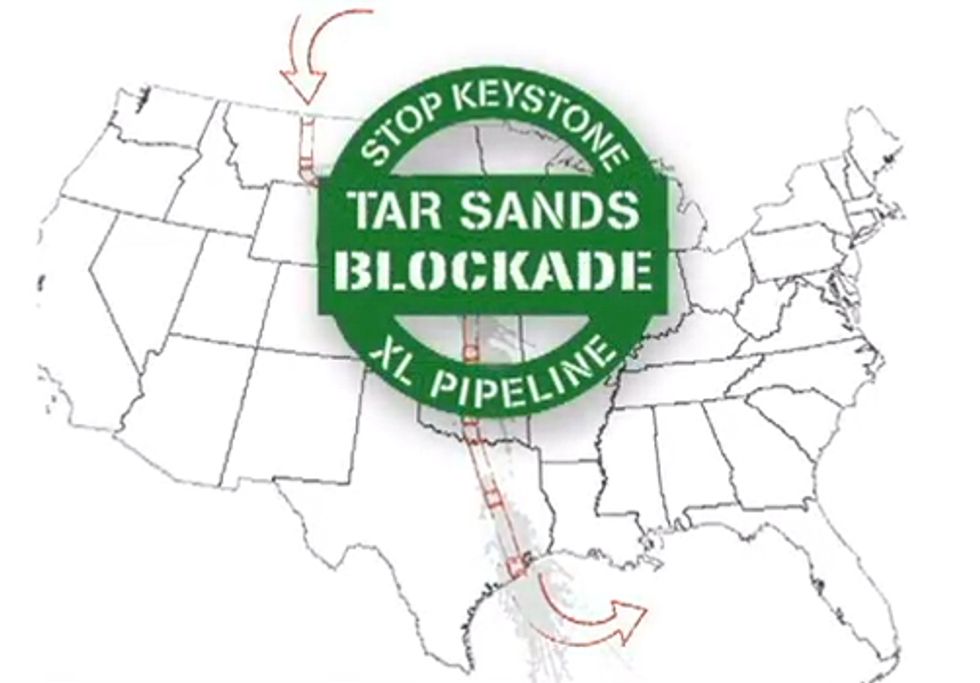 One year after more than 1,200 people were arrested in front of the White House during two weeks of sit-ins against the Keystone XL tar sands oil pipeline, a coalition of Texas landowners and activists will attempt to physically halt its construction. Led by veteran climate justice organizers, participants ranging from environmentalists to Tea Partiers are preparing to lock arms for a sustained nonviolent civil disobedience campaign, beginning perhaps as early as this week.

The impetus for such action, which is being called the Tar Sands Blockade, goes back much further than last summer, however. In 2008 and 2009, small landowners along the pipeline’s route in rural Texas, Oklahoma and Nebraska started noticing survey stakes with orange tape marked “KXL.” They soon found out that TransCanada—the company building the pipeline—had eminent domain power over their property and that if they didn’t sign a contract allowing TransCanada to build, they would be taken to court.

Many landowners, feeling pushed into an impossible situation, signed the contracts. Some began organizing, doing community outreach to explain what was happening and building conservative support on the ground. Organizations such as Nacogdoches Stop Tarsands Oil Pipelines evolved out of conversations between landowners—first focusing around eminent domain, but then, when they learned that tar sands oil would be pumped through the pipeline, discussion started to include environmental impacts, such as toxic diluted bitumen and climate change.

By August 2011, the climate movement in the U.S. started to focus in on the Keystone XL with Tar Sands Action, a civil disobedience campaign led by Bill McKibben and members of 350.org. The 1,253 arrests in front of the White House helped raise the issue to a national level by stressing that President Obama could stop the pipeline by rejecting its permit to cross the U.S.–Canada border.

Weeks later, the Occupy movement emerged. While environmental issues were not at the forefront, many Occupy encampments passed resolutions opposing Keystone XL and took part in Tar Sands Action’s next rally in Washington, D.C., when, on Nov. 6, 10,000 people encircled the White House. Days later President Obama denied the permit and, for the moment, Keystone XL was thought dead.

TransCanada then changed tactics and decided to split the pipeline into segments so that it could get a head start on construction while making inside deals in Washington to secure the necessary permit for crossing the border. In a sign of goodwill to the fossil fuel industry, President Obama went to Cushing, Oklahoma, and declared that he would “expedite” the permitting process for the Gulf Coast segment from Cushing to Houston and Port Arthur, Texas. While that ability was technically outside of his reach, it was a hint to the agencies responsible for such decisions. Perhaps not surprisingly, the Army Corps of Engineers then granted the three permits TransCanada needed to start construction—despite the absence of an environmental review.

The southern segment of the Keystone XL will be built in three different sections, simultaneously, with the goal of transporting tar sands oil currently stored in Cushing, Oklahoma, to refineries on the Gulf Coast, where it then can be shipped around the world. When Texas activists such as myself learned that this was happening despite the Tar Sands Action victory, we decided to form Tar Sands Blockade.

While landowners began organizing along the pipeline route in early 2012, climate justice activists with Rising Tide North Texas were looking for ways to bring wider attention to the pipeline’s impending construction. Many of us had been active Occupiers during the encampments and were disappointed with the movement’s inability to make the connection between economic justice and the climate. So we made a stronger effort to engage people on the community level.

As a result, Tar Sands Blockade is being informed by a variety of voices—from self-identified Tea Party members, flying Gadsden flags at the front of their long driveways, to Occupiers who slept at encampments across the country.

Several organizers with Tar Sands Blockade also participated in and organized for Tar Sands Action, including veteran climate justice activists from around the country. This diverse coalition has agreed on one simple call to action: The Keystone XL should not be built in Texas, and nonviolent direct action is required to stop it.

Other means of addressing the grievances of landowners and meeting the challenge of climate change have thus far failed. As Bill McKibben’s recent article Global Warming’s Terrible New Math made clear, the world has years, not decades, to confront the fossil fuel industry head on. Nonviolent direct action offers the best chance of victory, not just for the Tar Sands Blockade but for other fossil fuel extraction movements, such as those opposing fracking, mountaintop removal and coal exports—all of which have been active in what’s being called a Climate Summer of Solidarity.