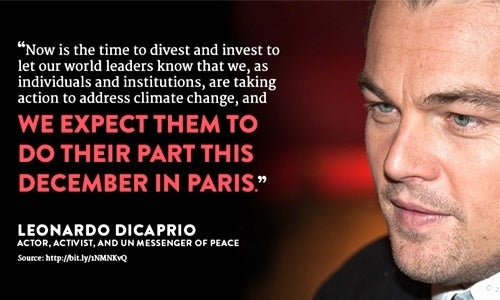 As the flow of capital away from dirty, dying industries grows to a torrent, how can ordinary investors avoid being among the last mistakeholders—the final financial losers of climate change? Throughout the hallowed halls of Wall Street, never known for their social progressivism, smart money is reducing exposure to risky fossil fuels.

Bank of America and Credit Agricole are turning away from coal financing this year. Citigroup is reevaluating “risk” from oil-sands projects and investing $100 billion in renewable energy development over the next decade. Nine of the world’s largest corporations have announced that they are switching to 100 percent renewable electricity.

Retweet if you agree with @LeoDiCaprio!

To date, 430 institutions and more than 2,000 individuals across 43 countries and representing $2.6 trillion in assets have committed to divest from fossil fuel companies—a 50-fold increase from just a year ago.

Norway’s sovereign wealth fund, the richest in the world and developed in an economy built on oil and gas wealth, divested from more than 100 companies for environmental and climate reasons. The University of California system endowment and pension fund has sold its $200 million stake in coal and oil sands companies and California Gov. Jerry Brown just signed a bill that would force the state’s pension investment funds, with a total of a half-trillion in assets, to drop all coal-related investments.

My fellow Nebraskan, Warren Buffet, advises “should you find yourself in a chronically leaking boat, energy devoted to changing vessels is likely to be more productive than energy devoted to patching leaks.” Those with real cash on the line and who speak calmly of risk-based approaches and short, medium and long-term investment strategies are declaring with their investment dollars that there is no future in dirty industries.

In the words of PricewaterhouseCoopers, “As climate change starts to affect access to raw materials, the reliability and security of global supply chains and even the types of products and services consumers demand, CEOs must also take a strategic view … to identify both the risks and opportunities for their business.”

Concurrent with this growing tide of divestment from fossil fuels is a shift toward investing in renewable energy sources and technologies. The world is now adding more capacity for renewable power each year than for coal, natural gas and oil combined, as cleaner technologies continue to come online and achieve viability in the market. By 2030, more than four times as much renewable capacity will be added. According to the International Energy Agency, solar could be the world’s largest source of energy within three to four decades.

Which brings us to a critical question: What about ordinary investors—the members of the 76 million American households that have invested more than $12 trillion in IRAs and 401ks?

Morningstar investment research shows that more than $800 billion in fossil fuel company stocks are hidden in the thousands of mutual funds that make up those accounts. Unless you are tremendously savvy regarding the holdings of the funds in your account, you probably don’t know what your exposure is.

Fortunately, the power of the Internet is beginning to yield some helpful web-based tools that even the smallest investors can use to not only protect themselves but also leverage their savings to pursue and accelerate a clean fuel economy. One of these, FossilFreeFunds.org, allows any investor to quickly and easily analyze their mutual fund holdings and see their exposure to fossil fuel companies. It is likely that more such tools will follow.

Armed with more information and a clearer picture, investors will be able to speak authoritatively to their brokers, advisors or even office managers about shifting their investment dollars into clean energy and away from those that are responsible for climate change.

The picture is coming into focus. The markets are pointing the way to a new economy based on high-tech, clean, renewable energy. It’s just a matter of time. Don’t let Wall Street leave you behind. Don’t be a stakeholder left holding the bill for fossil fuel companies’ mistakes.

Lisa Renstrom is the co-founder and chair of the Divest Invest Individual Initiative, a board member at Bonwood Social Investments and a former president of the Sierra Club.