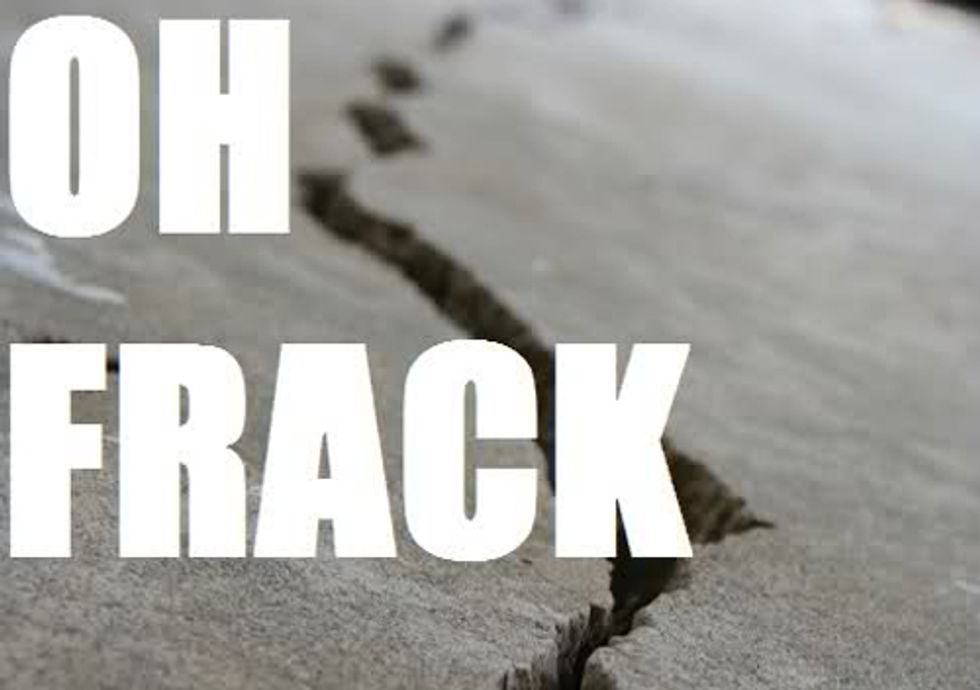 The fracking industry has been causing earthquakes in Ohio. So it’s time we caused one of our own.

No, not a 4.0-on-the-Richter-scale temblor like the one that shook Youngstown on New Year’s Eve. Instead, we need to aim for an 8.0 on the political scale—we need to shake Columbus with the biggest anti-fracking gathering yet seen in the U.S.

Save these dates—June 14-17, in Columbus. The 14-16th will be dedicated to training and movement building, and on the 17th we'll be taking over the Ohio statehouse for a people's assembly that will 'pass' legislation that Ohioans need to stop this destructive practice. You can sign up here, but we need you to do more—spread the word to friends and colleagues. And get ready for the caravan that will cross the state in mid-May to raise awareness—we'll have much more on that front soon.

Fracking is a great mistake for many local reasons. By now we’ve seen its effects on local water supplies—the dead creeks in Pennsylvania and West Virginia, the wells poisoned to the point where residents can’t drink from their faucets. We’ve watched fracking cause the worst air pollution in the U.S., even in Wyoming counties so remote and unpopulated that they lack stoplights. We’ve seen enough to know that communities are as easy to fracture as rocks—that neighbors have been turned against neighbors, and towns blighted as they turn into industrial zones crisscrossed by endless tanker trucks.

Gov. Kasich wants to bring all this to Ohio—and why not, since the industry donated $213,000 to his last campaign? His legislation would put only the slightest and most token reins on the industry. Foreign countries (France, say) have banned fracking, and several states including New Jersey and Vermont are poised to prevent the practice; in New York there’s been a de facto four-year moratorium.

Ohio is just the latest of many states poised to become a sacrifice zone. But as the nation’s attention turns to Ohio for the election this fall, it is a fitting place to make a stand and say that this process must stop once and for all. Of course we won’t stop here either—other governors, from New York, to Colorado, to even California should be on notice that a powerful movement against fracking is brewing in their backyards.

Ohio is also the dumping ground for fracking wastewater from many other states, and untold thousands of barrels of toxic and radioactive poison is injected underground into dozens wells in Ohio every day. This pollution is an inevitable result of any form of fracking, and if we stop the gas industry from treating Ohio as its personal dump, we may very well succeed in slowing down fracking operations across the northeast region and beyond.

It’s hard to overstate what’s at stake here. We used to think that natural gas might be a help in the fight against climate change—but new studies have demonstrated that so much heat-trapping methane leaks from fracking fields that it may be just as dirty as coal.

Ohio used to be one of the country’s leaders in renewable power—the solar and wind industries were sparking a manufacturing renaissance. But the 18-story gas-drilling rigs along the Ohio River are starting to make life hard for renewable energy—because they don’t have to pay for the environmental damage their drilling does, they can undercut everyone else’s price. “It’s kind of taken the wind out of wind,” one businessman explained.

We can’t let that happen—we can’t let Ohio turn into a pincushion, pricked with drill rigs and shaken by earthquakes. If we stay silent, special interests will win; if we speak out together we have a chance.

Not a guarantee—the fossil fuel industry is awfully rich. But we’re going to give it a try.