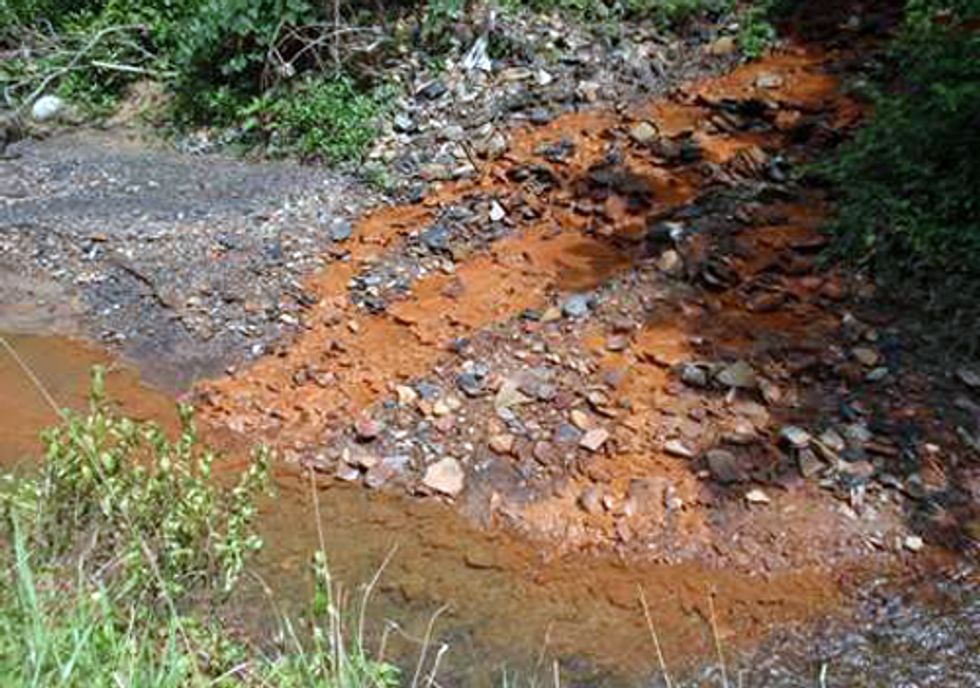 The next time you pour yourself a glass of water, spare a thought for Jimmy Hall and his neighbors. Jimmy is the fifth-generation Hall to own property on Mill Creek in Letcher County, Kentucky. He has deep roots in coal country. Back in the late 1800s, his great-great-great grandfather's homestead included an entire mountain range, but mountaintop-removal coal mining has turned his family's special place into a moonscape.

Then the Water Department called.

"'Don't drink the water,' is what they told us," says Jimmy. "They found arsenic and lead from nearby mining operations in my well water. It's not just me—my neighbors have the same problem. Many of them are chronically ill, and some have died."

Unfortunately, that's not unusual in eastern Kentucky, where rubble and toxic waste from mountaintop-removal coal mining frequently contaminate streams and valleys. In all of Appalachia, mountaintop-removal mining has already damaged or destroyed nearly 2,000 miles of streams. In just the past two decades, more than 500 mountains in Kentucky, West Virginia, Tennessee, western Virginia and Maryland have been leveled. At the current pace, 1.4 million acres of forests and mountaintops could be destroyed by the end of this decade. Gone forever.

It's a peculiar arrogance that can justify the obliteration of mountains that have stood for nearly 500 million years. But it's not only the mountains that are being destroyed—it is entire communities and a hard-scrabble culture that has survived for centuries. The people of Appalachia have seen more than their share of hardship, and it's made them tough. But the violence of mountaintop-removal mining—blasting and bulldozing, air and water contamination, mudslides and floods—is more than anyone should have to endure.

Why is this still happening in the 21st century? Demand for Appalachian coal is at a historic low. We have better, cleaner ways to generate electricity. We don't need the coal, but we're allowing coal companies to destroy the mountains and poison the land and water anyway. The human toll is high: People living near mountaintop-removal coal mines have significantly higher rates of cardiovascular disease and cancer. That's why Reps. Dennis Kucinich and Louise Slaughter have introduced the Appalachian Communities Health Emergency Act [H.R. 5959], which would place a moratorium on permitting for mountaintop-removal coal mining until health studies are conducted by the Department of Health and Human Services.

One key to fighting back right now: Poisoning people's water is not only wrong, it's against the law. The Clean Water Act sets clear standards for water quality, but in Kentucky's coal country the practice has long been to look the other way. In fact, the state of Kentucky would prefer to keep looking the other way, but the U.S. Environmental Protection Agency (EPA) has fulfilled its responsibility in the past couple of years by vetoing 36 surface-mining permits that didn't include provisions for ensuring water quality. Even though the agency approved many more permits than it rejected, that was enough to spark an uproar in coal country.

So last week, the EPA held hearings in Kentucky on its plans to protect water. Jimmy Hall and other Kentuckians were there to speak out for clean water, but they were outnumbered by hundreds of coal supporters bussed in by The Kentucky Coal Association. Says Jimmy: "They did everything they could to intimidate me and the dozens of other activists who were there. They booed, heckled and kicked us. Someone even threatened the safety of the representatives from the EPA who were there to listen to us."

Did Jimmy Hall find Big Coal's show of force intimidating? "Not when the health of our children is on the line," he says. "One of my neighbors showed me his well water—it was rust-colored and cloudy. He's forced to use it for drinking, food preparation and to bathe his children."

Some of the strangest pro-coal rhetoric came not from the public but from Kentucky government officials who spoke at the hearings: "Environmental permitting is not designed to stop legitimate business activities," said Kentucky Energy and Environment Secretary Leonard K. Peter, who apparently believes that coal mining deserves to operate above the law. Out of 21 Kentucky officeholders at the EPA hearing in Frankfort, only one, Rep. Joni Jenkins, (D-Shively), stood up for the EPA and clean water for her constituents.

What the coal companies are doing is wrong, but understandable. But for the state of Kentucky to put Big Coal's interests above the health and safety of its own citizens is reprehensible. For people like Jimmy Hall who have seen their heritage and now their drinking water destroyed by mountaintop-removal mining, the EPA and the Clean Water Act offer the biggest hope of fighting back against Big Coal in the heart of coal country.

But you can help, too. The EPA is accepting comments on its enforcement of the Clean Water Act in Kentucky. Urge them to hold the line for clean water.