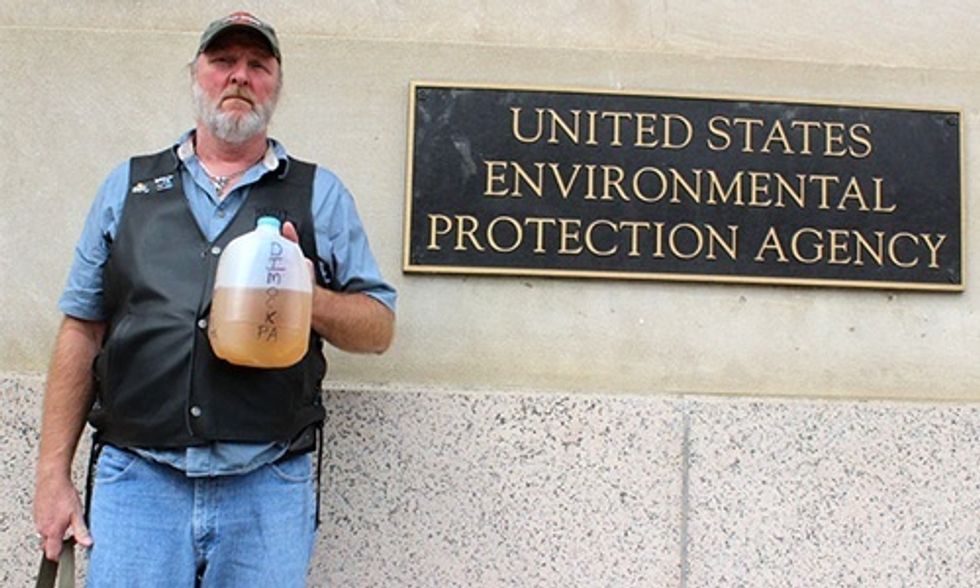 Don’t be fooled. Headlines in the New York Times and other news media about the U.S. Environmental Protection Agency’s (EPA) long-awaited study on the impacts of fracking on drinking water are another tragic case of not looking beyond the timid agency’s spin. Despite the lack of new substantive data and the limited scope of the study, the EPA did find instances of water contamination and outlined the areas where this could happen in the fracking process.

Ray Kemble of Dimock, Pennsylvania, holds a jug of discolored water from his well, contaminated by nearby fracking operations while standing outside of the U.S. EPA building in Washington, DC. Photo credit: Food & Water Watch

Rather than seriously undertaking its mission, the U.S. EPA’s headline and conclusions in the study reflect the agency’s on-going narrative about the safety of fracking. The agency asserted in the report on the study that there were no “widespread, systemic impacts on drinking water resources.” They based this outrageous conclusion on the limited industry controlled data and analysis that was included in the poorly designed research project.

The multi-million dollar study did not answer the fundamental questions about the pollution of water from hydraulic fracturing. The oil and gas industry pressured the agency in the design of the study, narrowing its scope and focusing it on theoretical modeling conducted by researchers that often conduct research favorable to the industry.

In a shocking display of the power of oil and gas interests, they successfully blocked the agency from gathering data from direct monitoring of fracking operations. Rather than demanding that companies like Exxon (the largest fracker in the U.S.) or Chesapeake allow them to monitor water wells near fracking operations, the EPA caved to industry pressure. For the study to be meaningful, the agency needed to conduct baseline water testing at prospective wells that would provide a snapshot of water quality before fracking and that would be retested after a year or more after oil or gas production began.

Geoffrey Thyne, a geochemist and a member of the EPA’s 2011 Science Advisory Board, a group of independent scientists who reviewed the plan for the study, remarked on the failure of its design: “This was supposed to be the gold standard. But they went through a long bureaucratic process of trying to develop a study that is not going to produce a meaningful result.”

Yet even with the study’s poor design and the deceptive headlines, the 600-page document does include concrete examples that fracking does indeed contaminate groundwater resources, a fact already confirmed by numerous studies based on existing scientific data. The study confirmed cases of water contamination with five after-the-fact, or retrospective, case studies, each focused on a community where residents have complained about water problems for years. This embarrassingly limited review of the impacts from spills and releases, water withdrawals, and issues with waste disposal provide proof that fracking negatively impacts our water resources. They included:

This incomplete and inadequate study is an embarrassment for the Obama Administration and the EPA. It falls far short of the level of scrutiny and government oversight needed to protect the health and safety of the many millions of Americans living in watersheds impacted by fracking—nearly ten million within one mile of a fracked well, according to the study.

Unfortunately the study and related media coverage will provide the industry more cover for continuing its poisoning of our nation’s drinking water via widespread drilling and fracking. Oil and gas industry foxes have once again been allowed to call the shots at the EPA’s henhouse, and protect their vision for widespread fracking, with what the EPA now confirms to be more than 25,000 new oil and gas wells each year.

Simply put, the EPA admits that fracking has been found to contaminate water, but its incomplete analysis and false characterization of its findings greatly downplays the severity of the problem. Industry’s pressure on the agency has politicized what is a basic public health concern. Putting a resource as precious and universally important as drinking water at risk is simply unacceptable, and the EPA, which is charged with protecting Americans from environmental risk, should be working to do everything it can to safeguard these vital water resources. This study is fodder to continue our ongoing fight to ban fracking everywhere.