Donald Trump Slapped With Fine for Pollution From His Private Jet 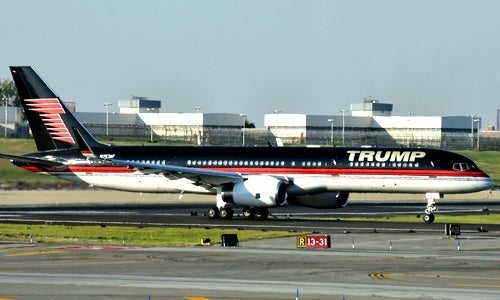 Donald Trump has been having a tough time in the UK lately. First, he lost his appeal with the UK Supreme Court to halt a Scottish wind farm project near his resort in Aberdeenshire. Next, a parliamentary petition, backed by more than 500,000 people, was launched to bar Trump from entering the UK. And now, a UK agency is slapping him with a fine for carbon pollution from one of his private jets.

Trump failed to hand over the carbon permits by the end of April 2013, as required by law, said Politico.

Trump, whose mother was Scottish, opened his luxury golf resort in Aberdeenshire in 2012, the period covered by the fines. He has been embroiled in controversy since he bought the Menie estate there in 2006. He has not publicly responded to the fines, but The Guardian said, news of the fines is “unlikely to impress Trump,” who has called global warming “bullshit” and a concept “created by and for the Chinese in order to make U.S. manufacturing non-competitive.”

On Wednesday, Trump threatened to withdraw $1 billion in investments from Scotland if the UK follows through on the petition to ban him from the country. The petition, which Parliament will debate on Jan. 18, was launched after Trump called for a “total and complete shutdown” of Muslims coming to the U.S.