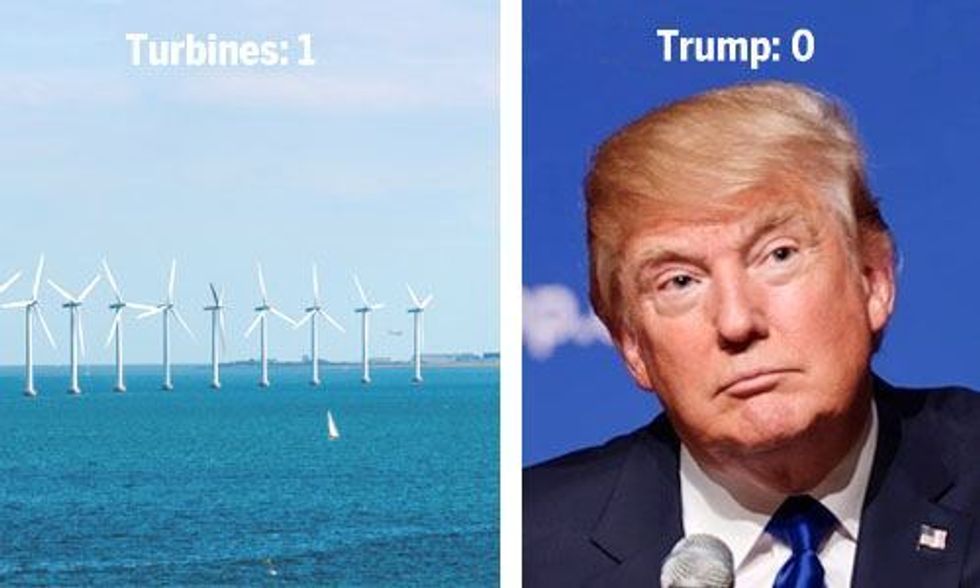 Donald Trump lost his fight against a wind farm being built near his Menie golf resort in Aberdeenshire, Scotland. The UK Supreme Court unanimously decided to reject his appeal against the offshore wind farm of 11 turbines, which was approved by the Scottish government.

"This is an extremely unfortunate verdict for the residents of Aberdeen and anyone who cares about Scotland's economic future," Trump's organization told the BBC. "The EOWDC [European Offshore Wind Deployment Centre] will completely destroy the bucolic Aberdeen Bay and cast a terrible shadow upon the future of tourism for the area."

"History will judge those involved unfavorably and the outcome demonstrates the foolish, small-minded and parochial mentality which dominates the current Scottish government's dangerous experiment with wind energy," the organization added. "We will evaluate the court's decision and continue to fight this proposal on every possible front."

The legal battle has gone on for years with Trump losing at every earlier stage. Trump was not present for any of the proceedings, but his lawyers argued Scottish ministers did not have the authority to approve the wind farm application and that there was a problem with the design application.

The judges dismissed his claims, saying, “It is clear that the consent contains a mechanism enabling the Scottish ministers to use both the construction method statement and the design statement to regulate the design of the wind farm in the interests of environmental protection, and to require compliance with those statements.”

Gary McGovern, energy and planning partner at the law firm Pinsent Masons, expressed his elation over the ruling today: “Donald Trump will be hoping he has more success at the U.S. ballot box than he does in the courts."

“Today’s decision is long overdue but is still a welcome shot in the arm for offshore wind and the wider UK renewables industry," said McGovern. "In pursuing a weak argument described previously in the court of session as ‘fallacious,’ this case has perpetuated a lingering doubt over longstanding legal principles, and that has been to the detriment of the whole energy industry."

“Developers will therefore breathe a sigh of relief and it is hoped that this and other projects affected can now gather pace, without the threat of costly legal challenges and delays on similarly dubious grounds hanging over them,” he added.

"These proceedings have been dragged out for years through three successive court judgements by Donald Trump as he tried to stop an offshore Aberdeen wind turbine demonstrator by means of legal action," Salmond said.

"In doing so he has at best postponed, and at worst jeopardized, a vital £200 million boost for the economy of the north east of Scotland," he added. "The offshore project could have been built by now with Aberdeen benefiting from becoming the offshore wind research centre of Europe—a vital development at a time of rock bottom oil prices."

World Wildlife Fund Scotland Director Lang Banks said: "This result is great news for Scotland and for all those interested in tackling climate change and creating jobs. Having failed in his attempt to undermine Scotland's renewables ambitions, it's now time for Mr. Trump to move on."

Trump has been embroiled in controversy since he bought the Menie estate in 2006. Many community members were vehemently opposed to Trump building his resort on sand dunes that were federally protected, according to the BBC. Residents have called the area “our equivalent of the Amazon rainforest.” The local authority initially denied planning permission for the estate, but the Scottish government overturned the decision.

It's all documented in the film You’ve Been Trumped, which has won 12 international awards. Trump threatened to sue the BBC when it announced it was showing the film on television three years ago. The BBC aired it anyway, and after the screening, Trump’s popularity in the UK plummeted. The film was briefly the highest-rated British film of all time on IMDb.

Trump was in the national spotlight in the UK last week as a record number of Britons signed a petition requesting the Parliament to ban Donald Trump from entering the country after he called for a ban on Muslims entering the U.S. The petition currently has more than half a million signatures.