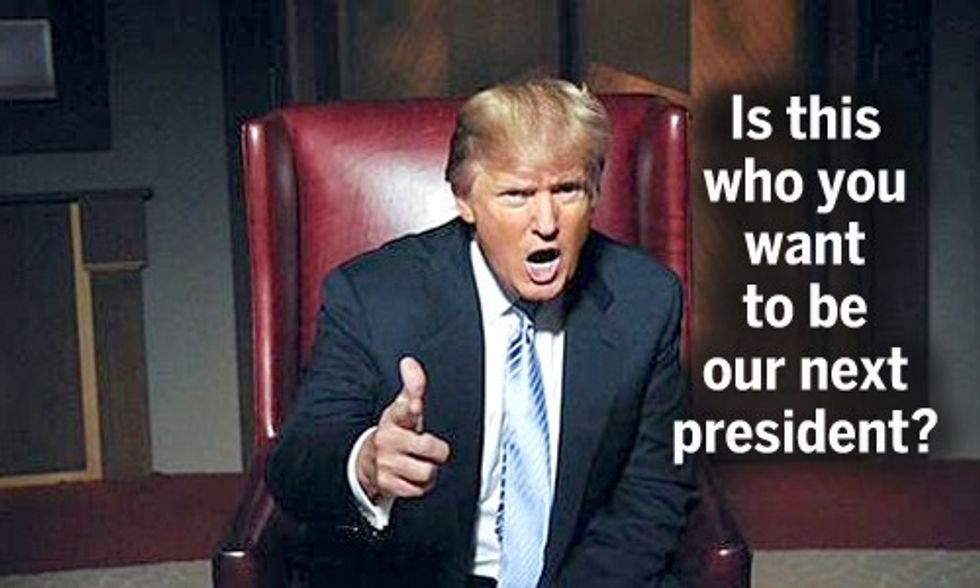 [Editor's note: Neil Young's manager has since released a statement saying that Trump was not authorized to use his song and the Canadian rocker is apparently a Bernie Sanders fan.]

After several election cycles of trolling the public, Donald Trump has finally announced an official bid for the White House.

Earlier this morning, I tuned into Periscope with 4,300 other viewers and watched the Celebrity Apprentice star make his way to a podium with Neil Young's "Rockin' in the Free World" blasting in the background. (The Donald's song choice is especially strange since it's a 1989 takedown of George H.W. Bush's presidential administration, and Neil Young is a noted environmentalist, who's vehemently against the kind of unfettered capitalism that Trump has built his career on).

Trump declared to a noisy crowd gathered at Trump Tower in New York City, “I am officially running for president of the United States and we are going to make our country great again,” referring to his official campaign slogan.

I am officially running for President of the United States. #MakeAmericaGreatAgain https://t.co/Ct0lNu7kz0

Trump, who has never held public office, also flaunted his incredible wealth. "I’m really rich," he crassly pointed out. "That’s the kind of thinking you need for this country. It sounds crass, it’s not crass."

Donald Trump just became the 12th Republican to enter the presidential race. That's pretty much all we've got. pic.twitter.com/aUq9ZPPlE6

While the real estate mogul did vow to rebuild the country's infrastructure, his announcement marks yet another climate denier throwing himself into the ring.

Check out what the avid Twitter user has said before on the topic (via Mother Jones).

Record cold temperatures in July - 20 to 30 degrees colder than normal. What the hell happened to GLOBAL WARMING?

Any and all weather events are used by the GLOBAL WARMING HOAXSTERS to justify higher taxes to save our planet! They don't believe it $$$$!

Oh Donald. If anything, extreme weather is proof of climate change. Here's another convoluted Trump tweet against renewable energy.

Wind turbines are not only killing millions of birds, they are killing the finances & environment of many countries & communities.

No matter how aggravating he is, Donald Trump is rich, famous and loud enough to stand out in this increasingly large field of GOP presidential candidates. That's why his annoucment is significant. His candidacy could affect who becomes the party's nominee as only the top 10 ranking candidates in national polls will be selected to appear at the first few Republican primary debates, shutting out less popular names.

The good news is, Trump doesn't stand a chance at winning the nod: roughly 57 percent of his own political party have an unfavorable view of him.