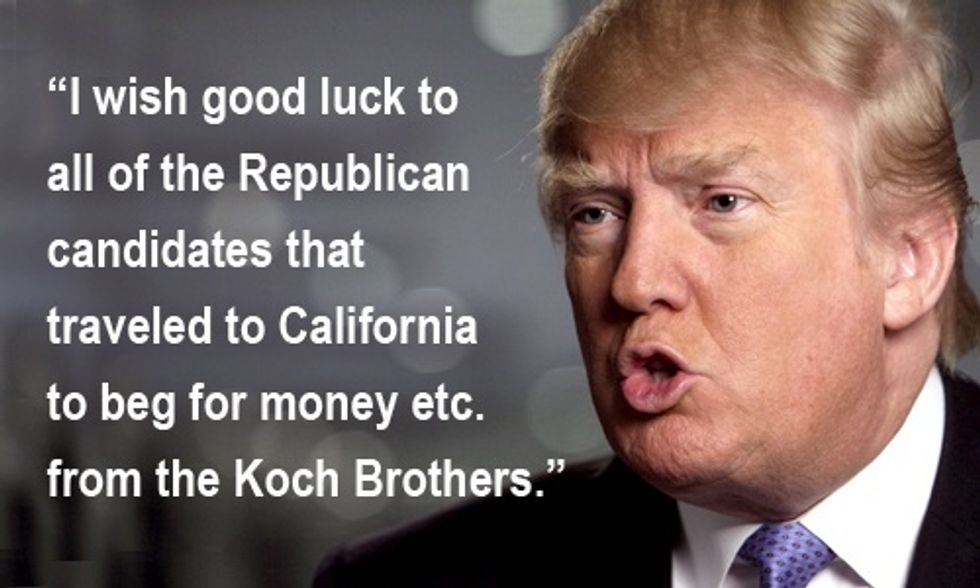 Loud-mouthed Donald Trump is more of a walking punchline than a viable presidential candidate, so it comes as a surprise to find myself actually agreeing with the current Republican front-runner:

I wish good luck to all of the Republican candidates that traveled to California to beg for money etc. from the Koch Brothers. Puppets?

This network of conservative mega-donors, or the Freedom Partners Chamber of Commerce, aims to spend a jaw-dropping $889 million for the presidential election, according to the Washington Post.

Seven sitting governors, six incumbent senators and two House members from the Republican party (including the aforementioned White House candidates) were extended an invite to the conference. Trump was not.

As EcoWatch previously pointed out, while the climate-denying mogul would be a perfect candidate for the Kochs, the deep-pocketed brothers have denied the Donald "access to their state-of-the-art data and refusing to let him speak to their gatherings of grassroots activists or major donors," Politico reported.

While many candidates in the crowded Republican field have taken this climate-denying mantle, on Sunday at the Freedom Partners forum, Sen. Cruz repeated his belief that “the data and facts don’t support” that global warming is occurring, the Guardian reported.

Bush also had harsh words for President Obama's new power plant regulations (surely in an effort to please the fossil fuel barons in the audience).

“I think it’s a disaster. It’s typical of the Obama administration, taking the power he doesn’t have,” Bush said, adding that the regulations were both “unconstitutional” and “a job killer.”

It appears that the candidates were well-received by the affluent attendees. "The Texas senator and the former Florida governor drew the most applause among the five Republicans who took the stage," Bloomberg reported from the event.

(No) thanks to the Supreme Court's Citizens United ruling that approved unrestricted campaign spending by corporations, a crop of billionaires and their super PACs have held unwieldy influence on the state of U.S. politics. Politico reported: “The 67 biggest donors, each of whom gave $1 million or more, donated more than three times as much as the 508,000 smallest donors combined."

“We’re going to introduce legislation which will allow people to run for office without having to beg money from the wealthy and the powerful,” the Vermont senator said.

Sanders has pledged not to accept super PAC money and is running his momentum-gathering campaign on small donations. “We must overturn [Citizens United] before it’s too late,” he added. “We are increasingly living in an oligarchy where big money is buying politicians.”