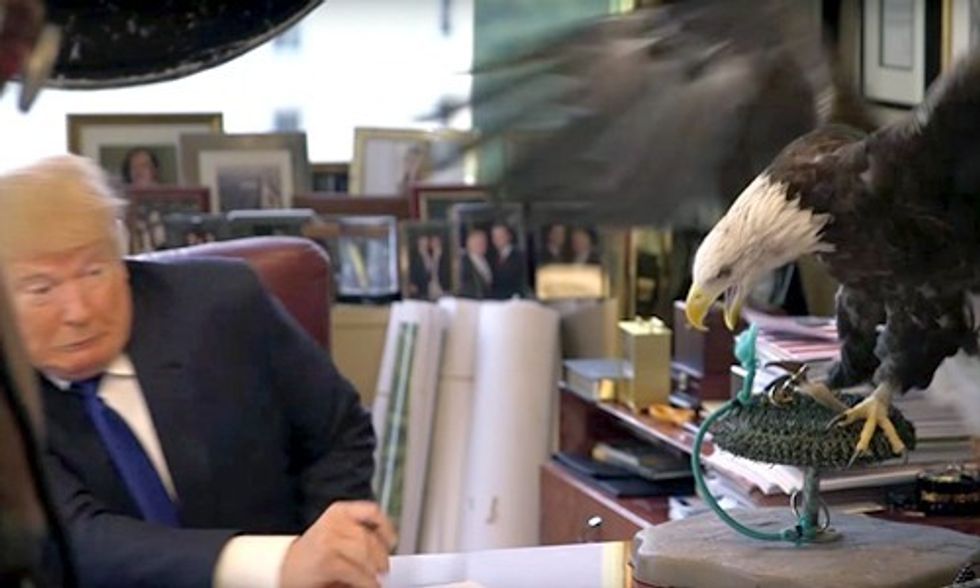 Here's some poetic justice for those Americans fed up with what critics are calling Donald Trump′s incessant bigotry and "demagoguery," as Bernie Sanders put it in an appearance on The Tonight Show Starring Jimmy Fallon. TIME released footage Tuesday of Donald Trump getting attacked by an eagle named Uncle Sam, who he posed with in August for a TIME cover story.

Uncle Sam appears not to care for those who denigrate Americans, as many believe Trump has done with his statements. He's been compared to Adolf Hitler, George Wallace and (gasp) Lord Voldemort. For the record, J.K. Rowling confirmed Voldemort has nothing on Trump. And many in the environmental community probably can't help but see the bird's lashing out as a rebuke for Trump's outrageous claims on environmental issues, including the Keystone XL pipeline would have "no impact on the environment" and "the concept of global warming was created by and for the Chinese in order to make U.S. manufacturing non-competitive."

Trump was runner up for TIME's Person of the Year. Bernie Sanders won the readers' choice by a wide margin for the annual award, but ultimately, the magazine's editors chose Angela Merkel.

People are having a field day with the GIF of Uncle Sam attacking The Donald.

Slate's Josh Voorhees said, "Forget TIME's Person of the Year, this if the GIF of the Year." And Ishaan Tharoor, who writes for The Washington Post, tweeted this:

Instead of any more takes on @realDonaldTrump, just please constantly share and re-share this gif. https://t.co/LPxUDUXOLO
— Ishaan Tharoor (@Ishaan Tharoor)1449679451.0