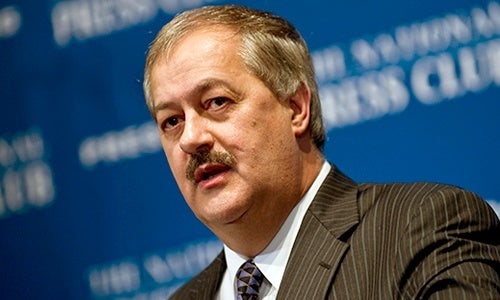 Don Blankenship’s, the former CEO of Massey Energy Co., trial started yesterday in what NBC News describes as “the biggest corporate accountability case in years.” Blankenship resigned as CEO eight months after one of its mines exploded in West Virginia in 2010, killing 29 miners.

Last November, a federal grand jury indicted Blankenship on charges that he deliberately flouted safety standards leading to the death of the 29 miners at Upper Big Branch Mine (UBB). He has been accused of “having tipped off managers about federal safety inspections ahead of time before the explosion and of having tried to cover up the company’s mismanagement after the explosion,” according to NBC News.

“Blankenship knew that UBB was committing hundreds of safety-law violations every year and that he had the ability to prevent most of the violations that UBB was committing,” the indictment said. “Yet he fostered and participated in an understanding that perpetuated UBB’s practice of routine safety violations, in order to produce more coal, avoid the costs of following safety laws and make more money.”

The U.S. Mine Safety and Health Administration investigation in 2011 revealed that “broken equipment failed to douse a small methane gas fire, which ignited coal dust in a giant blast that ended up as the deadliest U.S. mine accident in more than 40 years.” Blankenship, to this day, denies any wrongdoing.

Several family members of UBB Mine victims were present as the trial began, reports WCHS-TV8 in Charleston, West Virginia. Jury selection began yesterday and will carry over into Friday and Monday as 300 potential jurors will be brought in from around the state.

If he’s convicted in U.S. District Court in Charleston, West Virginia, he could face up to 31 years in prison for “conspiracy to violate safety laws, defrauding the federal government, securities fraud and making false statements to the Securities and Exchange Commission,” says NBC News.

“Prosecutors have produced memos, testimony and other evidence they say show Blankenship prioritized profits over safety measures that could have saved lives,” says AP’s Jonathon Mattise.

“He battled unions, spent millions as lead puppeteer behind Republican state politics and fought regulators over safety and environmental rules, which his mines often broke,” explains Mattise. He once described himself as “the most hated man in Mingo County.” Though, many would say that hatred extends much farther.

Robert F. Kennedy, Jr. had this to say about Blankenship in a report on EcoWatch last fall:

Don Blankenship once boasted to me that it was impossible to conduct mountaintop removal mining without violating the law. He prided himself on his cold-blooded capacity for turning America’s purple mountains majesty into coal company cash. His criminal mind allowed him to view the human beings of Appalachia as disposable production units. He is a sociopath and gangster whose gift was felonious greed and a stone-cold heart that allowed him to put his yearning for money and power ahead of human lives. Those qualities had great value to his friends and investors: the Wall Street robber barons. But they were poison and destruction to the noble communities of coal country.  We can’t bring back the towns he destroyed, the lives he took, the mountains he flattened, the rivers he poisoned, but there is some consolation in knowing that he’s getting what he deserves: three hots and a cot and long days in the company of fellow criminals of lesser appetites and lesser distinction.