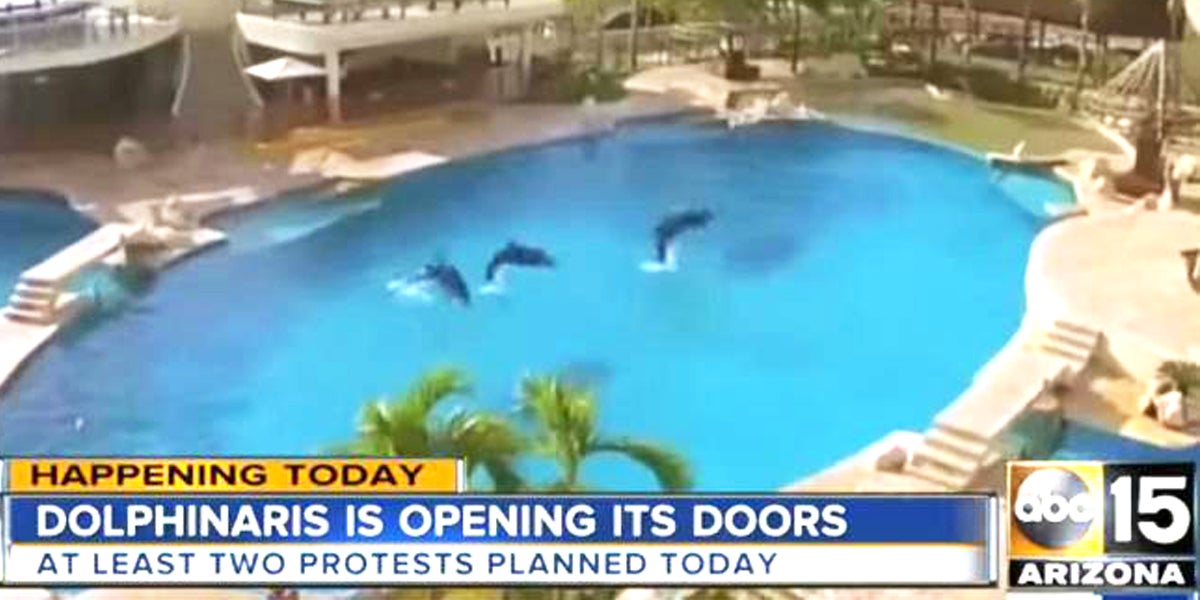 In the desert near Scottsdale, the new tourist attraction Dolphinaris Arizona opened for business on Oct. 15. Customers will pay hundreds of dollars for the opportunity to swim with its three captive dolphins.

How did those dolphins get there? They were flown from Hawaii by FedEx. 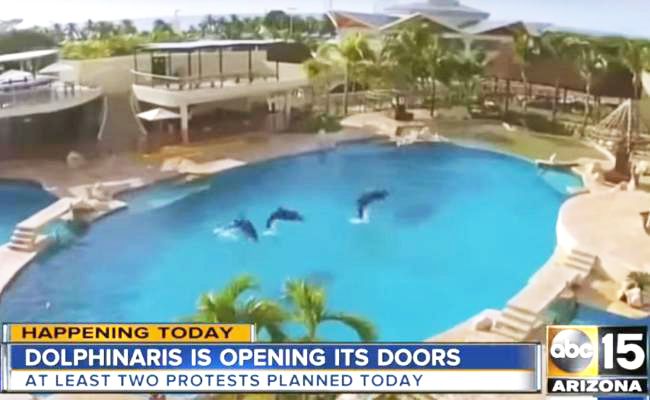 Two activists from the nonprofit advocacy group, Animal Rights Hawaii, went inside a FedEx cargo warehouse at the Honolulu Airport in late September and filmed a container holding the dolphins. The video was posted on the Animal Rights Hawaii Facebook page.

The dolphins were likely kept inside the shipping crate for at least 12 hours, based on the flight itinerary.

“I think it was definitely shocking for a lot of people to see that FedEx is transferring live animals in a box,” Alexis Thomas of Animal Rights Hawaii told Hawaii News Now.

The dolphins were provided by Dolphin Quest, a swim-with-dolphins company with two locations in Hawaii and one in Bermuda.

“I’ve been with these animals since they were born,” Michelle Campbell, Dolphin Quest’s vice president of animals, told Hawaii News Now. “They’re second-generation dolphins under our care and no one cares more about them than we do.”

But Alexis Thomas, who took the video, said one of the dolphins was showing signs of stress.

“The Dolphin Quest trainers were consoling the animal, who seemed to be in obvious distress, likely from the confinement of the box that it was in, of course, all of the noises that were happening, the fear of the unknown,” she told Hawaii News Now.

Once their flight began, the dolphins were likely “bombarded with foreign sounds, sensations, changing air pressure during flights and are known to vocalize and thrash out in fear,” Lisa Arnseth, co-founder of Dolphin Free AZ, told CBS 5.

The dolphins’ scary experience didn’t end when they finally landed in Arizona the next morning. The three are now part of the interactive “Dolphin Swim Experience” at Dolphinaris Arizona.

Learn About Dolphins by Shaking Their Fins and Rubbing Their Tummies

“Join the pod! You’ll love our dolphin swims,” says the website. “Swim with our dolphins in shallow water. Then interact by shaking a dolphin’s fin, listening to their unique sounds and learning about their amazing evolutionary adaptions for life in water or simply caressing a dolphin’s back or tummy!”

This is the first—and hopefully last—Dolphinaris tourist attraction in the U.S. There are also several locations in Mexico, where the company is based. CBS 5 reports that its newest facility is regulated by the U.S. Department of Agriculture, but is not “bound by state-level regulation,” which is troubling.

Dolphinaris Arizona is described on its website as “unique in design with an emphasis on providing animals variable enrichment and habitat.” The only thing “enriching” about places like this that allow people to swim with dolphins are all those tourist dollars going into the owners’ pockets.

As for the habitat, summer temperatures in Scottsdale average in the triple digits. But no worries! The Dolphinaris Arizona website notes that there are shades over the habitat, “though some direct sun is natural and healthy for dolphins.” I don’t understand what is “natural and healthy” about the desert sun beating down on these captive dolphins.

Not only is the heat an issue, but allowing people to swim with dolphins has been proven to have a negative impact on these animals. The stress has caused behavioral abnormalities, illness and lowered resistance to disease and death, according to Whale and Dolphin Conservation. For these reasons, TripAdvisor recently did the right thing and stopped booking tickets to attractions that allow people to interact with captive wild animals.

As soon as Dolphinaris Arizona announced it planned to open in Scottsdale, animal lovers began to protest. More than 167,000 Care2 members signed a petition urging the CEO not to open the tourist attraction. Their signatures were hand-delivered on Oct. 16.

Regardless of the petition and the fact that similar tourist attractions like SeaWorld are experiencing huge drops in attendance, Dolphinaris Arizona opened for business anyway. Hopefully, anyone who cares about the welfare of animals will boycott it and tell everyone they know to boycott it as well.

And as for FedEx, the company needs to follow in TripAdvisor’s footsteps and stop contributing to this cruel industry by transporting animals held in captivity. Please join more than 121,000 Care2 members who have signed and shared this petition telling FedEx to stop transporting live dolphins for the captivity industry.