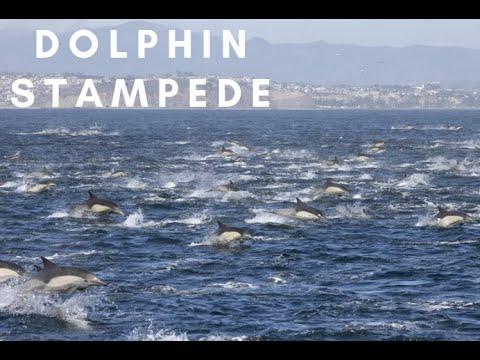 Tourists on a whale-watching boat of the California coast were treated to a marvel of marine life last month: a dolphin “stampede!”

That word for the phenomenon was coined by Dana Point Whale Watching, who posted a Youtube video of hundreds to thousands of common dolphins swimming in one direction March 19.

“This is pretty phenomenal,” a voice can be heard exclaiming in the footage.

The tour company, which has operated out of the Orange County city that gives it its name for the last 50 years, kept pace with the massing dolphins for around four hours, HuffPost reported.

“The dolphins take off so fast they turn up the water making it white water,” the tour company wrote in the video description. “You can hear them swimming through the rushing water. They are so graceful even in the frenzied behavior and we are so amazed to see them right of[f] our coast.”

A large group of dolphins is actually known as a super or mega pod, according to HuffPost. The marine mammals usually travel in pods of 200 or fewer. But sometimes, they merge when food concentrates in a single area.

This isn’t the first time the phenomenon has been recorded. One of the most spectacular instances was in 2013, when as many as 100,000 dolphins were spotted off the San Diego coast, as NBC 7 San Diego reported at the time. The superpod covered a five by seven mile stretch of ocean.

What is unique to Dana Point Whale Watching is their word choice. Some commenters objected to the term dolphin stampede.

“‘Stampede’ is a poor description,” one Youtube commenter wrote. “It implies that this is a panicked, clumsy mass movement of animals. I have driven in a boat through a super-pod such as this, and these animals are anything but that. They are graceful and controlled. It’s a beautiful thing to see.”

However, most internet users were just grateful for the sight. The video went “viral” with around 25,000 views and more than 400 likes as of Monday, The Hill reported. As of Tuesday, the number of views had nearly doubled to 45,625.

As the tour company wrote on Instagram, “Who doesn’t love a dolphin stampede!”