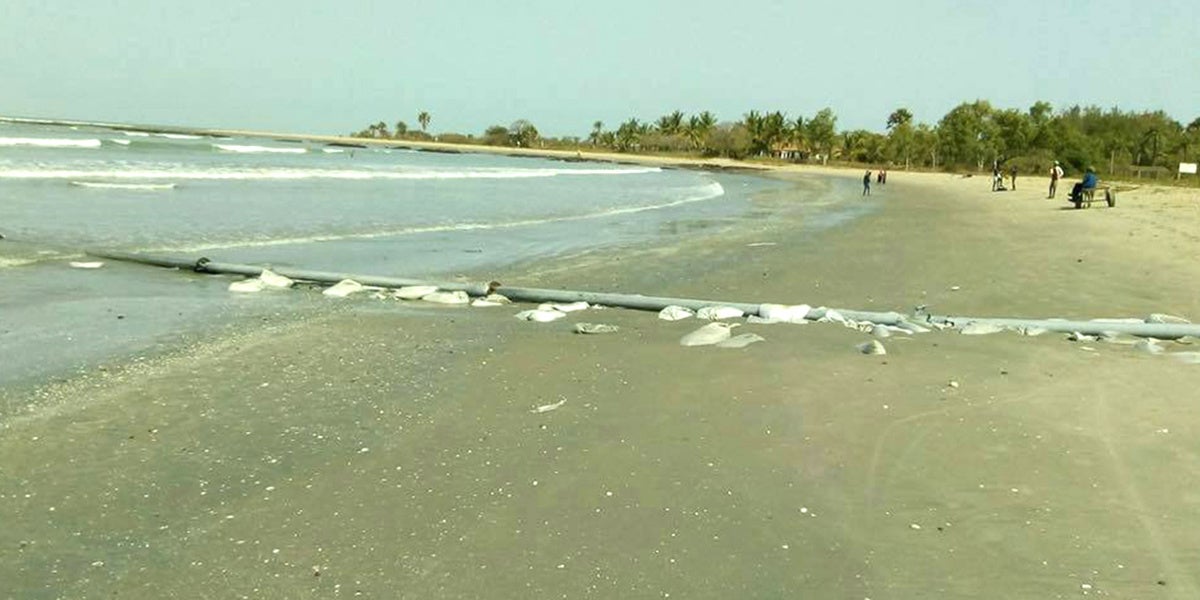 A dolphin was found dead on a beach in Gungur, a coastal town in The Gambia, aggravating local concerns over pollution being dumped into the ocean by a Chinese fish processing factory, Africa News reported Sunday.

Heartbreaking photos of the incident were tweeted out by Togo human rights advocate Farida Nabourema Saturday.

A dead dolphin was found on the beach of Gunjur in the #Gambia this Saturday morning. The pollution caused by Chinese company Golden Lead which drains its waste into the sea is disastrous. Some Gambian activists protesting against this were arrested last week. #Africansrising pic.twitter.com/Ma8GyqRn8S

The dolphin was just the latest marine life fatality that local activists have blamed on the Chinese Golden Lead Company, according to Africa News.

During May 2017, dead fish found washed up along the coastline of The Gambia were thought to be killed by waste discharged by Golden Lead directly into the ocean via pipes. Instead, it was revealed they were dumped by fishermen who could not sell their catches to Golden Lead, Africa News reported in 2017. In June, Golden Lead settled out of court, agreeing to pay $25,000, begin treating wastewater and fund testing of water that had already been polluted.

The National Environmental Agency (NEA) fined the fishermen and reached an agreement with Golden Lead not to order more than they could buy.

Senior environmental inspector at the NEA Lamin Samateh told Africa News that the company was supposed to have installed a water treatment plant upon opening, but had not done so at the time of the settlement.

The dolphin was found one week after six young people were arrested May 6 for protesting Golden Lead’s activities, Planet Earth World News reported May 7.

One of the young men arrested, Lamin Jammeh, was a U.S. citizen on vacation. He was apparently not involved in the protest and was arrested while picnicking nearby.

Our youths are heroes for standing up for their #environment. They would be awarded in other counties, but they are caged like animals in the #Gambia This in not what we voted for! #humanrights #GambiaEnvironmentMatters #gunjur #barrow @amnesty @AmnestyWARO @BarrowPresident pic.twitter.com/m3A9nl23Ig

After Gambian activists gathered outside the police station where the protesters were being held, the six were released on bail May 7, Gunjur News Online confirmed via Twitter.

#Gunjur6: we can confirm that those arrested for a proposed peaceful protest against Golden Lead pollution in Gunjur have been released on bail. pic.twitter.com/xMaetkjJGq

But that was not the end of their ordeal. Gunjur News Online further reported that the group’s leader, Sulayman Bojang, was visited at his home at 2 a.m. May 8 by officers warning him to stay quiet about Golden Lead’s activities.

#Gunjur_six: two officers turned up at the house of Sulayman Bojang at 2am to warn him to stay away from Golden Lead pollution issue or he will face severe consequences.2/2 pic.twitter.com/4qSSMdeayq

According to the Facebook group Stop Golden Lead Factory exploiting the Gambia, there is another protest against Golden Lead planned at Gunjur beach for May 19.