Does your Representative Vote Against Clean Air and Take Polluter Money? 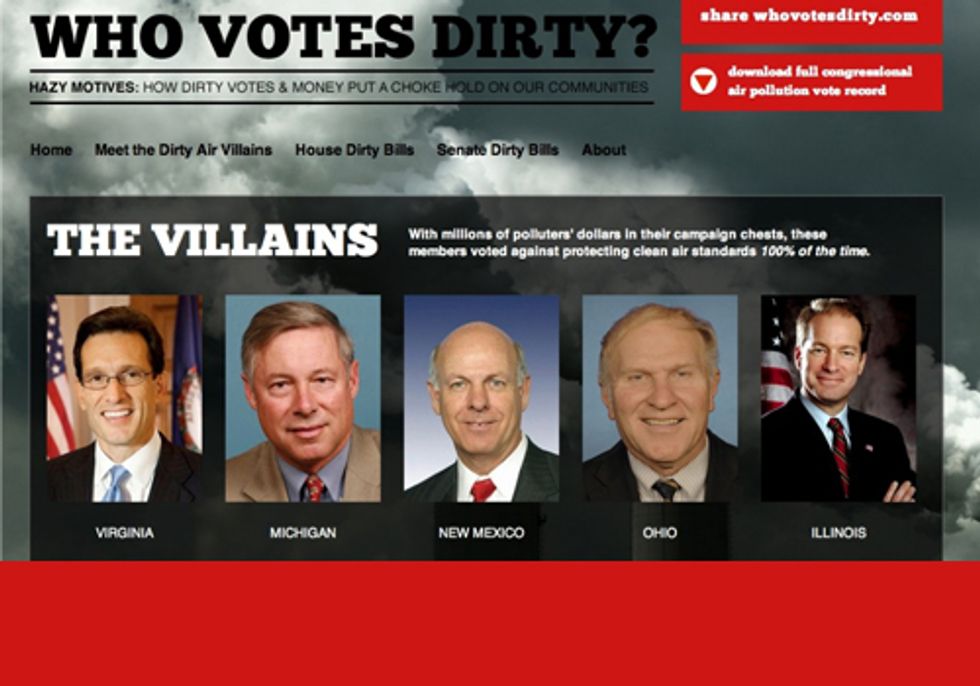 When your child’s football game is cancelled because of bad air quality or your parent has respiratory trouble because of smog, it’s hard to know which dirty power plants or factories are causing the problem. It’s also difficult to know which Congressmen or Senators are making it easy for industries to pollute your air.

Unless you follow the trail of votes. Now the Natural Resources Defense Council (NRDC) Action Fund has made it easy to do just that. Clean air has been front and center in this Congress, and the NRDC Action Fund and Environment America analyzed recent voting patterns to discover who is standing up for public health and who isn’t.

An astounding 192 members of the U.S. House of Representatives voted against clean air every opportunity they got. (Plus, we named Speaker of the House, John Boehner, a villain for scheduling all the dirty air votes.) In the Senate, 39 lawmakers did the same. We dubbed these folks the Dirty Air Villains.

Luckily Washington still has heroes too:  99 Representatives and 43 Senators championed the safeguards that keep mercury, lead, arsenic and other air toxins out of our air. And they took far less money from polluters on average than their Congressional peers who voted the wrong way.

But we went one step further and looked at the air quality data for congressional districts as well. No community benefits from a vote for more pollution, but some are hurt more than others. A large number of the Dirty Air Villains—48 in the House and 25 in the Senate—represent people living in towns and cities ranked among the most polluted areas in America.

NRDC Action Fund analysis found that House members who took more than $100,000 from polluters over the course of their career voted against clean air standards twice as many times as those who accepted less than $100,000 from dirty industries. In the Senate, members taking more than $500,000  in career contributions from polluters voted against clean air protections three times as often on average as those taking less.

Ordinary citizens can feel overwhelmed by the amount of money pouring into politics these days. How can we compete against deep-pocketed coal companies or oil refineries?

The answer is: by raising our voices and spreading the word. Some members of Congress count on voters back home not knowing the consequences of each vote they cast—or each campaign check they cash. If you don’t know, then you can’t express outrage at the polls.

Take Ohio for instance, which has three of its major metro areas ranked within the 25 worst areas for air pollution in the country. Ohio Senator Rob Portman voted against clean air at every opportunity he had while taking over $670,000 in contributions from polluters during his congressional career. And if you live in Cleveland-Akron area,  which has the country’s 14th most polluted air for year-round soot, you can find out that Rep. Jim Renacci voted to block clean air standards every chance he got, the same congressman who took over $140,000 in polluter contributions over his career.

This is powerful information—information that can combat the influence of money and help sway elections. This year’s races don’t rest on swing voters. They will be won by whoever inspires more of their base to turn out at the voting booth. Let the information about clean air votes and polluter contributions WhoVotesDirty.org inspire you to vote—and tell your friends and family to do the same.

Top battleground states this election have a mix of Villains and Heroes: