Does the 'Horsemeat Scandal' Have You Thinking Differently About What You Eat? 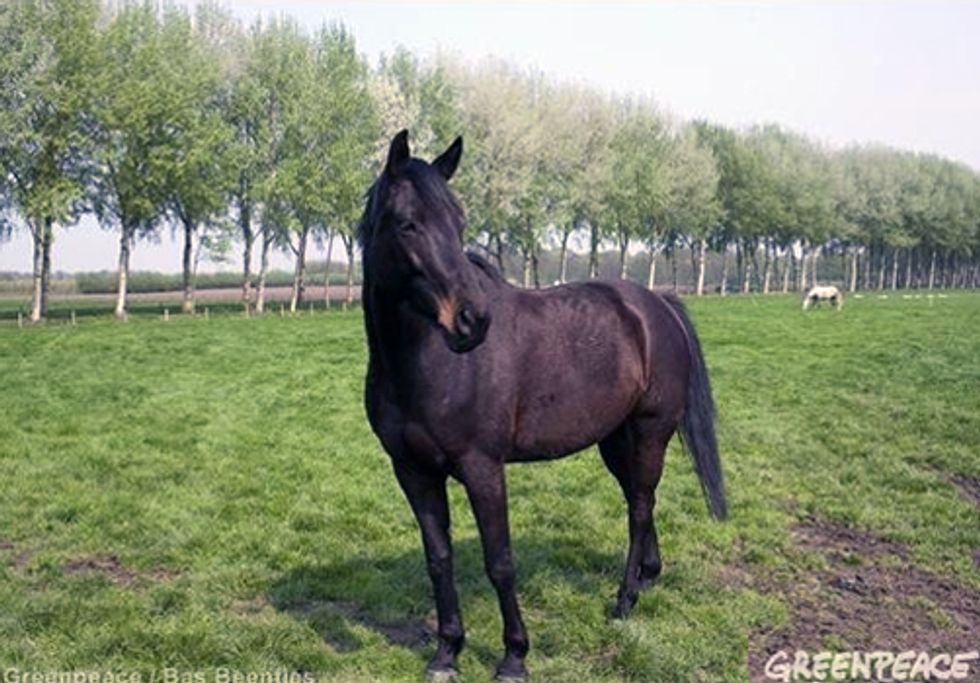 So while the horse meat issue has created a small earthquake for the food system, we need a seismic shift that will change the current broken food system into a functional one. Photo courtesy of Greenpeace

Over the past couple of weeks the "horsemeat scandal" has topped news headlines, revolted consumers and forced retailers and producers to come clean and revise their supply chains.

This is firstly a story of mislabelling, but mostly another insight into the untrustworthy and opaque food industry that is trying to cater to an ever growing appetite for cheap and abundant meat.

The scandal has once again put the spotlight on a broken food system geared to feed luxury food (meat) to already overfed people in the global North, while disregarding the environmental, biodiversity and socioeconomic problems associated with the livestock industry, let alone the dietary needs of the global South.

Today, the global North—countries including the U.S., Canada, Australia and Europe—is eating far too much meat and the so-called BRICS countries (Brazil, Russia, India, China and South Africa) are rapidly catching up, fueled by the aspirational status eating meat projects.

The vast consequences of the large scale meat production and consumption has been described several times, most recently in a United Nations Environment Programme (UNEP) commissioned report, Our Nutrient World, which calls on the global North to halve its meat consumption.

As lead author, professor Mark Sutton puts it: "If we as Europe go for optimum consumption, not always the most of everything, it's going to improve health and benefit the environment. There's an optimum to be found between what's on your plate and helping the environment."

And the message is slowly starting to resonate with policy makers. The Swedish government, for example, has just proposed a tax on meat in an attempt to lower meat consumption.

Looking specifically at Europe, Greenpeace International has just released a report that explores how we can reduce livestock production and consumption to fit within ecological limits, such as biodiversity, climate change and water use. The report finds that if agriculture systems are ecologically optimised it will not only protect the ecosystems but play a key role in achieving global food security.

So while being a step in the right direction, cutting down on meat consumption as the UNEP recommends, is just part of the equation.

The nature of the production system is equally important. This coupled with the fact that just a handful of companies are dominating global food production, makes it a daunting task no stakeholder can take on alone. Policymakers, producers and consumers alike will therefore need to roll up their sleeves.

In order to feed the world equitably—now and in the future—eating meat like we do today in the global North is simply not an option.

So while the horse meat issue has created a small earthquake for the food system, we need a seismic shift that will change the current broken food system into a functional one. This would be a system based on ecological farming and have you and I cutting dramatically down on our meat consumption. While the first will be a gradual process, the latter can be started today.