Does Polar Vortex Mean 'So Much for Global Warming'? 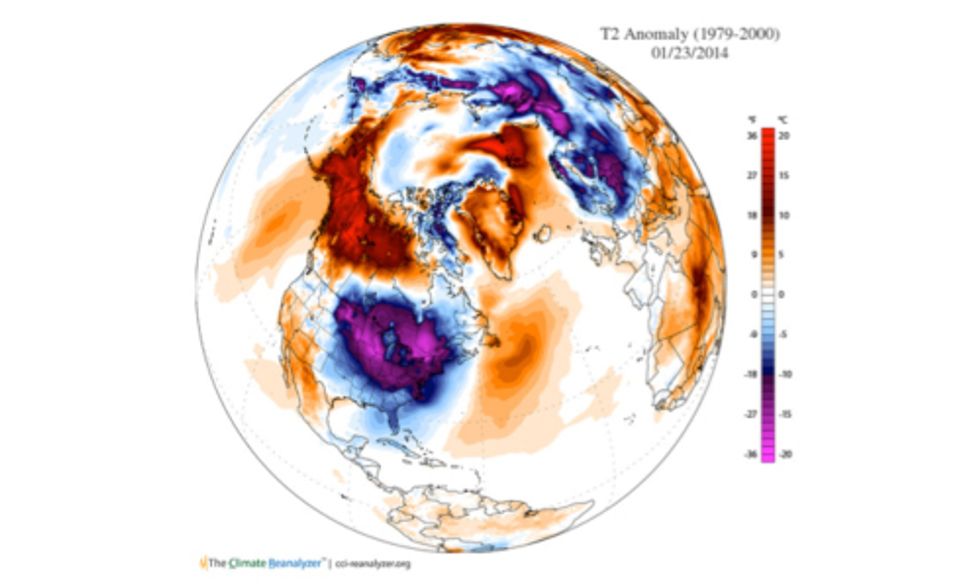 Over the past couple of months, the U.S. has seen the return of something many believed had been lost for good: cold weather.

Although the current temperatures in the eastern U.S. may seem unusually cold, in the context of our history they really aren’t. In fact, most of the cold that has made the news lately hasn’t been all that chilly compared what was “normal” for the 20th century. The AP explained our short-term memory loss in this article, Scientists: Americans are becoming weather wimps, the nerdy web comic XKCD captured the sentiment even more concisely.

The bottom line? Because the last decade was the hottest on record (and just a year ago, the U.S. saw its warmest year ever) Americans have grown accustomed to warmer winters that make normal cold feel extreme.

Some then wonder why this winter has been so (normally) cold and why temperatures in Peoria this winter have not been warmed by climate change to, say, a balmy 60 degrees F. The climate denial bubble claims that the cold winter weather means that surely CO2 cannot be warming the atmosphere. How can there be global warming if it’s snowing outside, after all?

Well, the short answer is that cold winters still happen even in a warmed world, but that doesn’t mean it’s cold everywhere. In fact, we don’t even have to leave the U.S. to find a very striking image of warming. We just have to shift our attention from the East to the West Coast. Alaska, usually snowy and frigid, has had two weeks of record high temperatures. Amazingly, the second half of January has averaged 40 degrees F above normal during some days in the central and western parts of the state.

The persistently jagged jet stream we have witnessed in recent weeks has led most recently to what some have termed a “Drunken Arctic.” Stumbling south with polar winds and snow, this unexpected meteorological event seems to have caught our collective attention. And why shouldn’t it? It is an unusual enough, if not unprecedented, event. And it has rekindled curiosity over how human-caused climate change may be impacting the jet stream and the weather systems associated with it.

So, is there a climate connection to this strange occurrence? While more study is certainly needed, I have been increasingly impressed by the growing body of evidence supporting the hypothesis that climate change may lead to more persistent meanders in the jet stream. In a world without global warming, the temperature difference between the freezing Arctic and warmer lower latitudes creates a pressure field that confines the jet stream to a relatively tight band around the Arctic, with wave-like meanders characterized by ephemeral “ridges” and “troughs.” As the Arctic melts and warms, however, that temperature difference is reduced, and the meanders of the jet stream potentially become more pronounced and more sluggish. The more sluggish and persistent those meanders, the more persistent the patterns of regional warmth where the jet stream pulls warm air northward, and the regional cold where it pulls arctic air south.

Looking at this image of temperature deviations we can see how the Arctic, in its “drunken” meandering, has fallen head over heels, hitting the southeastern U.S. like an over-enthusiastic reveler face-planting in the gutter shortly after closing time. The large purple region over the eastern U.S. represents weather 20 degrees F colder than the 1979-2000 average. Compare that to the massive red expanse over Alaska and Canada, which indicates weather 20 degrees F warmer than the same baseline.

Perfectly encapsulating the upside-down, hung-over Arctic is this remarkable observation, courtesy of Jeff Masters of the popular Weather Underground blog: At 10 p.m. on Jan. 26 the temperature in Homer, Alaska (54 degrees F) was warmer than any other place in the contiguous U.S. except southern Florida and southern California.

As we approach Groundhog Day, celebrated in the iconic nearby town of Punxsutawney, the question we’re all asking here in central Pennsylvania of whether or not we’ll see an extended winter may in fact depend on what is happening instead thousands of miles to the north in the melting Arctic.

And the very same jet stream configuration responsible for the southward plunging Arctic air mass that chilling the eastern U.S. is associated further to the west with a “ridge” of high pressure that is pushing the warm, moist subtropical Pacific air masses that would normally deliver plentiful rainfall (and snowpack) to California well to the north.

Climate scientists were beginning to suspect a decade ago that the dramatic loss of Arctic sea ice might alter the jet stream in precisely this way, favoring conditions eerily like what we are seeing right now in California: unprecedented and devastating drought.

So to conclude, I propose a toast to the Arctic, whose instability should serve as a wake-up call to those steeped in denial. When it comes to kicking our “fossil fuel addiction” (as former president George W. Bush referred to it), let’s hope we’re not much further from hitting rock bottom. Because when a drunken Arctic leaves Alaska warmer than Georgia in mid-winter, and California as high and dry as it has ever been, we should know we may have a problem.