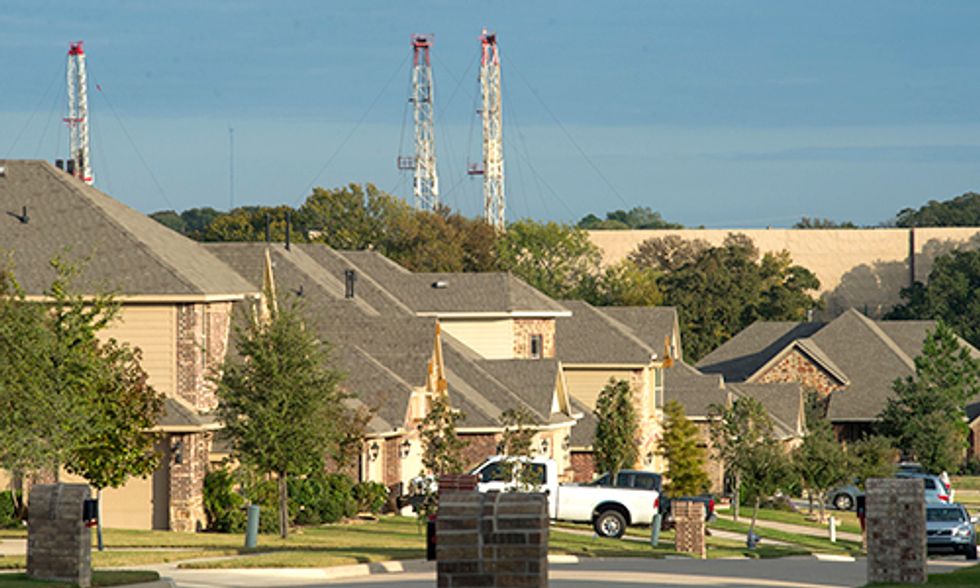 According to comments made by Mark Grawe, chief operating officer at EagleRidge Energy, Denton, TX residents who object to his company’s reckless operations way too close to their homes, schools and parks are terrorists worthy of inclusion on the Department of Homeland Security’s watch list.

He appeared at the meeting with a police officer in tow. When a resident asked if the officer was for his protection, Grawe talked about a Barnett Shale Energy Education Council meeting he attended where his industry peers advised him to take security with him to community meetings because “they” have been to meetings where “it escalated.”

Grawe went on to tell the Mansfield residents that some people in Denton are “preaching” civil disobedience and that they are on “the watch list” but not his watch list.

The U.S. Department of Homeland Security Watchlist Service (WLS) is a database of known or suspected terrorists compiled by the Terrorists Screening Center.

The Department of Homeland Security (DHS) currently uses the Terrorist Screening Database (TSDB), a consolidated database maintained by the Department of Justice Federal Bureau of Investigation Terrorist Screening Center of identifying information about those known or reasonably suspected of being involved in terrorist activity in order to facilitate DHS mission-related functions, such as counterterrorism, law enforcement, border security and inspection activities.

It’s shocking to think that young families, pregnant women and retirees who don’t want to live next to a heavy industrial plant that will decrease their property value, diminish their quality of life and emit hazardous air pollutants that compromise their health would be considered terrorists. But what is more shocking is that Grawe supposedly has inside information about who is on the DHS watch list.

If you saw Gasland Part II, you will remember that retired Air Force officer Virginia Cody was a victim of domestic spying by the DHS.

Virginia Cody was a member of Gas Drilling Awareness Coalition, a public awareness group, which is the same kind of group as Denton’s Drilling Awareness Group. Powers mistakenly sent an email to Cody that made it clear the DHS was supporting the oil and gas industry in trying to squelch opposition.

At the center of the controversy is an e-mail written by the director of the state Homeland Security Office that seemed to take sides in the Marcellus Shale gas-drilling debate.

“We want to continue providing this support to the Marcellus Shale Formation natural gas stakeholders while not feeding those groups fomenting dissent against those same companies,” James F. Powers Jr. wrote in a Sept. 5 e-mail to Virginia Cody, an antidrilling activist in Northeastern Pennsylvania. Philly.com, Rendell’s office releases content of all bulletins on planned protests

Like Denton’s Drilling Awareness Group, Gas Drilling Awareness Coalition members are not radicals nor do they participate in any illegal activities. Yet they were listed on intelligence bulletins as security threats right along with Al-Qaeda operatives.

Equally shocking was the revelation that the Pennsylvania Department of Homeland Security had distributed those bulletins to local police chiefs, state, federal and private intelligence agencies, and the security directors of the natural gas companies, as well as industry groups and PR firms. AlterNet, Corporations and Law Enforcement are Spying on Environmentalists

Pennsylvania State Police’s intelligence unit was not impressed with the quality of information in the bulletins.

“I likened it to reading the National Enquirer. Every so often they have something right, but most of the time it’s unsubstantiated gossip,” George Bivens, director of the state police’s Bureau of Criminal Investigation, testified in a Pennsylvania Senate hearing last month. ProPublica

Governor Ed Rendell, accepted Powers’ resignation two weeks after the domestic spying news broke. Rendall said he was embarrassed by the incident but he failed to apologize. (Note: Rendell pressured the Environmental Protection Agency (EPA) to drop it’s investigation of water contamination by Range Resources in Parker County, TX. Parker County is one of three water contamination cases where, despite evidence, the EPA backed away from investigations).

Adam Briggle, University of North Texas philosophy and religion professor and Denton’s Drilling Awareness Group member and his student, Ben Kessler an Iraq war veteran were visited by the FBI in early 2012. The FBI questioned Briggle about an ethics course he was teaching that touched on non-violent civil disobedience. At the same time, Briggle was working with Denton’s Drilling Awareness Group helping to organize Denton residents to advocate for more protective drilling regulations. PegasusNews, UNT Professor, student questioned by FBI

Kessler had helped organize a peaceful protest in April 2011 outside Range Resources’ offices in Fort Worth. In a Washington Post article the FBI said they acted on an “anonymous complaint.”

The conference also included topics about how to inoculate academics, reporters and lawmakers, the most important, influential members of society, how to align with universities to gain credibility and the importance of tracking the opposition and all their contacts.

Grawe’s statement confirms there is an unholy alliance between the oil and gas industry and our government. But it also shows how deep that alliance goes and the extent of industry’s use of psyops against the American people. If even a third-tier operator like EagleRidge has inside information about who is on the DHS’s Watch List, it’s easy to believe the industry could have influence on who gets added to that watch list.