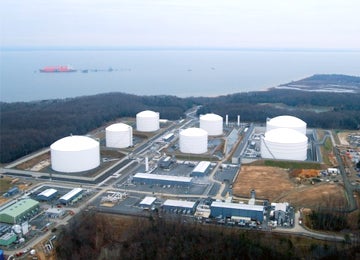 The Department of Energy (DOE) announced yesterday it has conditionally authorized Dominion Cove Point LNG to export domestically produced liquefied natural gas (LNG) over seas to countries that do not have a Free Trade Agreement with the U.S.

The conditional approval from the DOE is pending environmental review and final regulatory approval, but would allow the facility to potentially export up 0.77 billion cubic feet of natural gas a day.

Dominion Cove’s authorization from the DOE to export from the Lusby, MD, terminal will essentially mean more fracking for natural gas in states like Pennsylvania, Ohio and West Virginia that lie above the coveted Marcellus Shale basin.

“Exporting LNG to foreign buyers will lock us into decades-long contracts, which in turn will lead to more drilling—and that means more fracking, more air and water pollution, and more climate-fueled weather disasters like record fires, droughts, and superstorms like last year’s Sandy,” said Deb Nardone, director of the Sierra Club’s Beyond Natural Gas Campaign. “And all this when we know that the dangers of natural gas will only become more clear as we learn more about its effects on health and the climate.”

According to LNG Global, Dominion Cove Point owns not only the export station but the pipeline infrastructure that will be used to deliver fracked gas to the terminal. The pipeline will be fed through the interstate pipeline grid, “thereby allowing gas to be sourced broadly,” Dominion stated in their application.

“Their pipeline system provides access to the Appalachian natural gas supply (Marcellus Shale), as well as connections to supplies from the Gulf of Mexico area, the mid-continent, the Rockies and Canada,” LNG Global explained.

“It’s a bad deal all around: for public health, the environment and America’s working people,” continued Nardone. “The economic study the DOE itself commissioned clearly states that LNG export will transfer wealth from wage earners to fossil fuel executives. LNG export is nothing but a giveaway to the dirty fossil fuel industry, at the expense of everyday Americans.”

Visit EcoWatch’s LNG and FRACKING pages for more related news on this topic.