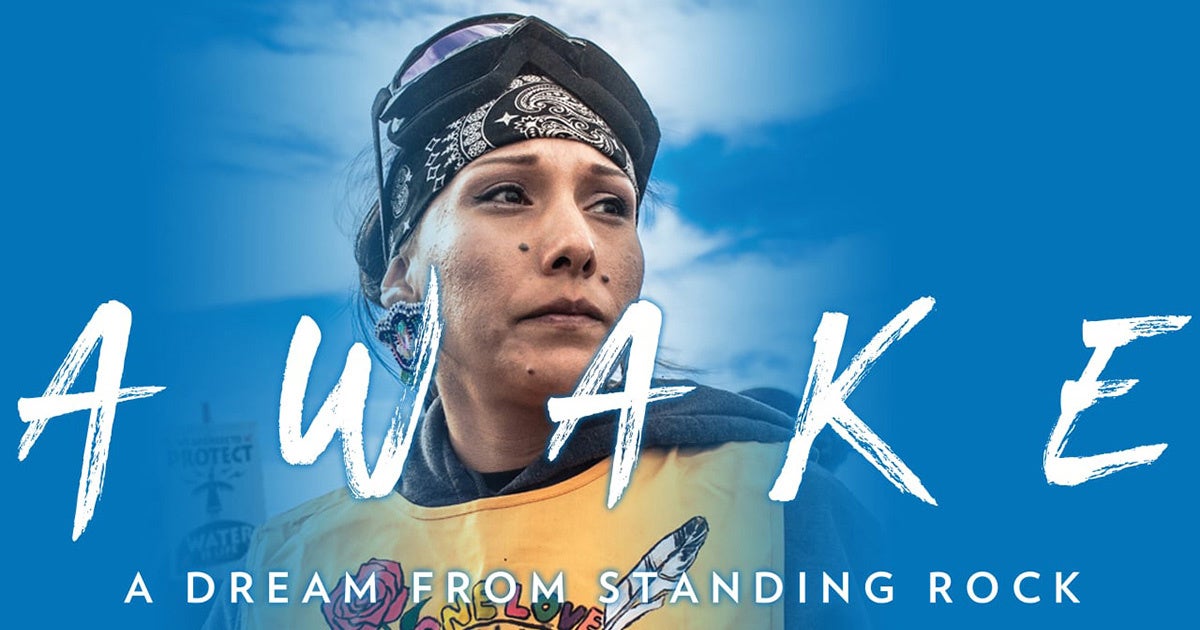 In October of 2016, I wrote a piece called How to Talk About #NoDAPL: A Native Perspective. I had visited the Standing Rock camps twice at that point, at the request of local youth who coordinated skill shares for Water Protectors, and I had written extensively about the movement. About a year later, I was asked to share my thoughts on the documentary, Awake, A Dream from Standing Rock.

But how does one critique a dream? A dream isn’t bound by timelines or historical nuance. It’s as much feeling as fact, and the lines between the two often blur.

As the name implies, Awake, A Dream of Standing Rock, is a series of images and reflections, unbound by the conventions of documentary storytelling. The film’s dream-weaving approach at times works masterfully, capturing sounds and images that should be preserved in crisp, heartbreaking detail. In other moments, the film veers between the poetic and the historic with such ease that I was left wondering whether some viewers would know the difference.

The film’s first chapter was directed by Josh Fox, who exposed the environmental toll of fracking in Gasland. The footage expands upon familiar scenes, invoking imagery that elicits every emotion it intends to. Co-writer Floris White Bull’s poetic narration is penetrative and well-paced. But poetry does have its limitations. One can hardly complain because, as the title warned, Awake is a dream of Standing Rock, not a hard timeline, or an exploration of the complex lessons it taught.

But hybridizing poetry and history is risky. When a narrator veers between poetic flourish, such as White Bull’s characterization of the camp as a place without hate or fear, and factual details, about police attacks and pipelines, edges can blur.

The film’s second section is both breathtaking and essential. Without narration, the images and activities of the people being filmed tell their own story, and the footage provides a haunting sense of what it was like to be on the ground in Standing Rock, during that sprawling movement moment.

As someone who was deeply connected to these events but not a long term resident of the camps, I was grateful for the moments captured in Part II. During a sequence where Water Protectors knelt in prayer on Backwater Bridge, I could feel the holiness of the moment, and I could even remember how the cold air felt in my throat as I walked on that bridge.

And when Protectors were attacked on the bridge with water cannons, I relived every emotion I experienced that night, knowing my friends were on that bridge, soaking and battered, and there wasn’t a damn thing I could do about it.

At that point, I messaged some of my friends who were traumatized by police in Standing Rock to offer a trigger warning.

The film’s third and final section was directed by Native filmmaker and activist Myron Dewey, of Digital Smoke Signals. The importance of Dewey’s work as a documentarian is inarguable. But as a direct action educator and organizer, I must disagree with his initial commentary in Awake.

In Part III, we are presented with text summaries of some of the legal history at work. Next we hear Dewey’s take on events. Dewey’s first major assertion is that Morton County Police had initially been friendly to protesters, and only turned violent after the desecration of sacred ground by Energy Transfer Partners.

In truth, police frequently approach protesters respectfully, at first, with tensions mounting as movements grow, threatening the status quo with their potential.

Further, attributing police violence to desecration de-contextualizes Native struggle from the realities of policing and resistance. People who brave the frontlines of liberation struggles are routinely battered in the U.S., whether they are challenging pipelines, police violence, or any other oppressive instrument or practice. Native people are killed by police at a higher rate than any other group, and our movements have always been met with violence and repression. It would be ahistorical to assume that police would have continued to treat Water Protectors gently as the movement grew, if not for the desecration.

The fear of what Water Protectors might accomplish caused law enforcement to show its true character in Standing Rock. From dogs and water cannons to COINTELPRO tactics that aimed to escalate tensions between Protectors, what police unleashed in Standing Rock was an unsurprising culmination of a history of violence toward Natives. No new violation of the sacred was needed to trigger this violence that has recreated itself since first contact.

Police who approached with a smile, and even joined round dances in the early days of the movement, were two-faced foes—always one order away from everything that followed. To deny this not only separates us from history, but from other justice movements in which people have been brutalized when they raised their hopes and voices too high.

To his credit, Dewey does capture the intractable nature of law enforcement in Standing Rock, highlighting the lack of accountability and, ultimately, the impunity with which police harassed and harmed Water Protectors, while criminalizing Protectors for minor or even wholly imagined legal offenses.

As someone who believes in the importance of frontline storytelling, I appreciate Awake for what it uplifts. Despite my narrative disagreements with the film, I think it’s an important effort, that should be seen—especially for the film’s second section.

It is the hope of any movement moment that it be remembered, and carried by many voices, which will mean the offering of many perspectives. If the viewer understands Awake as a puzzle piece in a much larger picture, in which many complexities go untouched, it will aid in their understanding.

But it is also crucial that the viewer understand the film as a dream, a vision, and a re-remembering, not a historical or social analysis of a movement and its many moving parts.

At their best, the Standing Rock camps were still rife with contradiction and difficulty. They had no uniformity of belief with regard to tactics or strategy. In truth, no such uniformity is possible in such an unprecedented convergence. Native peoples are not exempt from any of the difficulties that the tactic of occupation can bring. Factions form. Conflicts unfold. Participants butt heads over tactics and strategies—and some will invariably confuse the two.

The Standing Rock I knew was not a mystical place with a uniform perspective. It was a complex place—an experiment in love, hope, courage, and solidarity, unlike anything our peoples had experienced. It was full of beauty and catastrophe. It was bitingly human because we are human. And, as is often the case, the magic was in the mess.

The story of Standing Rock—of state violence merging with corporate interests, of human potential and human destruction—is not an original concept. It has many iterations, across history and around the world. Standing Rock is no less special for this. If anything, I hope the unacquainted will take it as an invitation, to study the struggles they may have missed, and to join the fray when called.

Watch the trailer below:

Kelly Hayes wrote this article for YES! Magazine. Kelly is a queer Native writer, organizer, and movement photographer. She is also a direct action trainer and a co-founder of The Chicago Light Brigade and the direct action collective Lifted Voices. She is a contributing writer at Truthout and blogs at TransformativeSpaces.org, where this article originally appeared, about U.S. movements and her work as an organizer against state violence.

This article was funded in part by a grant from the Surdna Foundation. Reposted with permission from our media associate Yes! Magazine.