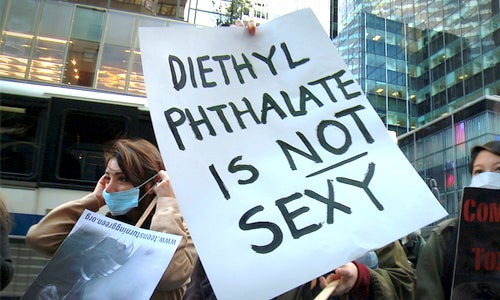 In the last week, I’ve featured seven of the films, including: Yemeniettes, A Will for the Woods, Slingshot, Marmato, The Horses of Fukushima, Farmland and Antarctica: A Year on Ice.

Today, I’m featuring The Human Experiment, the documentary EcoWatch is sponsoring this year.

Actor Sean Penn narrates the film and is the force behind this documentary directed by Dana Nachman and Don Hardy, which raises awareness about toxic chemicals in everyday products.

CIFF’s Clint Rohrbacher provided this synopsis of the film:

If you made a list of the risks and dangers you face, it might include terrorist attacks, plane crashes, smoking and driving. But does it include your coffee mug, toothpaste, shaving cream or lipstick? After watching this thoughtful and disturbing documentary, it will. Since the rise of chemical usage began, certain illnesses started to spike as well. Breast cancer, autism and infertility all rose dramatically as new chemicals made their way into virtually every product touching our lives—with few, if any, regulations or requirements to prove safety. With public awareness grew a powerful web of lobbyists and PR firms whose job is to deflect blame and responsibility from a hugely profitable industrial base. (If the “4 Dog Defense” doesn’t boil your blood, nothing will.) Following powerful individual cases and using testimony from medical professionals and politicians, The Human Experiment will both alert you to dangers and show you what you can do about them. This is a film that much of Corporate America does not want you to see. We do.