‘Not Without Us’ Follows Climate Activists on the Front Lines 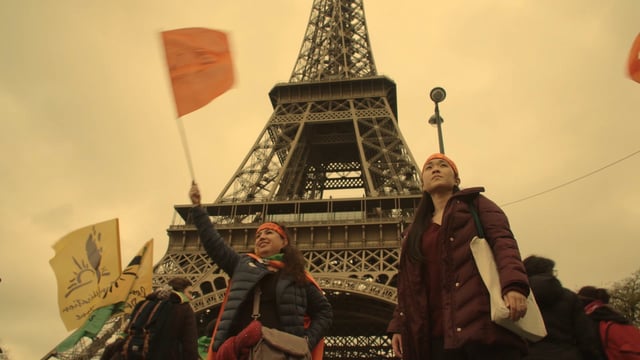 The documentary Not Without Us follows seven grassroots activists from around the world as they mobilize around the 2015 UN Climate Talks in Paris and try to push world leaders to enact an agreement with meaningful and binding targets. According to director and San Francisco-based filmmaker Mark Decena, “Climate change is a monumental issue that impacts all of us. But too often, dialogue about the subject is led by politicians and scientists. With this film, we wanted to give voice to the people on the ground, who are trying to effect change from the bottom up.”

Decena recently caught up with Cindy Wiesner, one of the activists featured in the film, on the latest in grassroots climate change action after the Trump administration’s withdrawal of the U.S. from the Paris agreement. Wiesner is executive director of Grassroots Global Justice Alliance and has been active in the grassroots social justice movement for more than 20 years.

Mark Decena: So a lot has happened since December 2015, or maybe in your eyes nothing has changed. But going into the agreement, what was your top concern about Paris and what major change did you guys wanted to see instituted in that final agreement?

Cindy Wiesner: When the Paris agreement was signed in 2015, we at Grassroots Global Justice Alliance, along with our sister alliances the Indigenous Environmental Network and the Climate Justice Alliance really wanted to make sure that the agreements created mandatory emission cuts and that our big concern was that in the outcome that the agreement really relied on voluntary pledges. And part of that is that where the countries were aiming was not going to meet the targets that scientists have been saying for many years were necessary to avoid climate catastrophe.

MD: And those voluntary pledges that you first mentioned know they were striving for this 2.5-to-2 degrees window, and then they ended up all the pledges ended up with over 3 degrees, which is really frightening. And you called out that they’re all voluntary, which means non-binding. And given those concerns, what are your thoughts now that President Trump announced the U.S. is pulling out of it?

CW: I think Trump’s reckless decision underscores the key overarching issue with the Paris agreement in the first place, which is that voluntary pledges are not enough. And that it’s also very clear that Trump and this administration, from Rex Tillerson being the secretary of state to Rick Perry being the energy cabinet position—you see that his accountability for accountability is to the fossil fuel industry but also to the military industrial complex.

Given his announcement in terms of ongoing war in Afghanistan, it clearly is in contradiction to his commitment to people in Pittsburgh or people in Detroit or people who have been impacted by NAFTA. It’s counter to people who are living at the front lines of the climate crisis and I think Trump and his administration really have a clear conflict of interest placing their own dirty energy investments above and profit above the interest of humanity and the planet as a whole.

MD: And not to mention Scott Pruitt.

CW: Yes. And whose pure intention is to destroy and dismantle the EPA.

MD: And I know that that the world is on fire, literally and figuratively, with this new presidency and his administration, but all those things you mention I know you guys see as all connected. And that brings me to the next question which is are there specific actions and advocacies that you guys are focused on at the moment or are you trying to show people that all of these thoughts do connect?

CW: So in terms of the Paris agreement, I think it’s just important to name how significant [it is] that at least the current count [that] is more than 370 mayors have pledged to do their part here around meeting the commitments laid out in the Paris agreement. And I think that that is giving us an opportunity a real important opening to push the long-term solutions that we had been talking about. And as Grassroots Global Justice, along with our sister alliances, [we] have formed this bigger formation called It Takes Roots to weather the storm, to grow the resistance. We also know that it’s time to both escalate the level of resistance but also really align our movements.

I think that’s part of what we’re really clear about is that our organizational response has been to strengthen our movement—the grassroots organizing sector uniting with different folks like the movement for black lives, the migrant rights movement—[to] work with a broader cross-section of folks to really counter this right-wing growing backlash. And I think it’s not only to defend and protect, but also to figure out where it is we can create openings in this new political moment.

MD: And I guess I want to I want you to clarify, because I think a lot of people are scratching their heads, saying, what does climate change have to do with immigration and war and racism and patriarchy and colonialism? How do you guys connect those dots and invigorate people think about this bigger picture of climate change as well?

CW: Yeah, I think a lot of our work with Grassroots Global Justice comes out of people who have been pioneers in the environmental justice movement, [and who] really have talked about the impact of environmental degradation and toxins and pollution and dumps that have been in a lot of frontline communities—particularly poor and people of color or white working-class communities. I think that for us, we’ve been seeing it as a holistic point of view. It’s not only where you live, but it’s where you work; it’s where you play and pray.

MD: As a final question, what gives you hope? What keeps you fighting and moving forward?

CW: For me, I think that it’s a lot of the young people that have been on the streets. It’s all the people that came out spontaneously into the airports and swarmed the airports when the Muslim ban was put into effect. It’s the 40,000 people in Boston that march against white supremacy and to counter white supremacy. It’s the People’s Climate March, where over 200,000 people came together to talk about needing jobs and climate and justice and moving the articulation of the climate movement. It’s the Women’s March, which had the single largest mobilization of women. I think that is what’s giving me life and I think the intentional movement building work that we’re doing with It Takes Roots, with Beyond the Moment, with the different organizers from the 100 days of mobilization. It’s the people who, despite fear and repression, are still standing up. And I think that’s what is giving me giving me courage.

Also I think we’re right. And I think that’s what we’ve been saying all along of like we can’t see issues as one siloed way. We have to interconnect the issues. We have to pay attention to movement building. We’ve got to get boots and sandals on the ground and really get our bases mobilized, and I think the planet depends on us to do that.

Speakers featured in Not Without Us, in order of appearance:

This interview has been condensed for length. Reposted with permission from our media associate Moyers & Company.