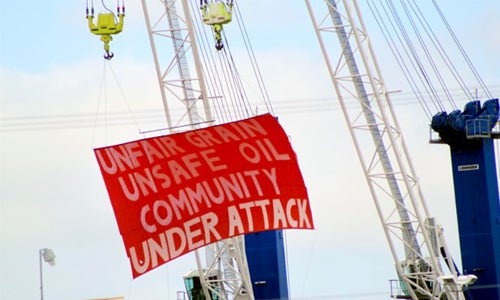 In remembrance of the one-year anniversary of the Lac-Mégantic oil train tragedy that killed 47 people, the International Longshore and Warehouse Union (ILWU) raised a banner from cranes today calling out unfair labor practices and protesting unsafe oil at the Port of Vancouver in Washington. 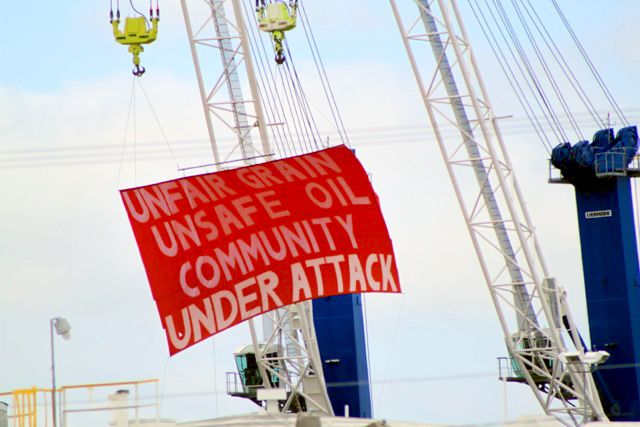 The International Longshore and Warehouse Union raised a banner from cranes calling out unfair labor practices and protesting unsafe oil at the Port of Vancouver in Washington.

The Port of Vancouver is under intense scrutiny because it has not supported the locked-out ILWU Local 4 who have worked the docks in Vancouver since 1937. The port refuses to assist the ILWU during a labor dispute with the multinational United Grain Corporation.

At the same time, the port is trying to ram through a dangerous and dirty crude-by-rail terminal proposed by Tesoro. This terminal would send 42 percent of the capacity of the Keystone XL pipeline—360,000 barrels per day—by train to Vancouver, where the oil would be loaded onto oceangoing vessels to sail down the Columbia River. The ILWU has taken a stand against the massive crude-by-rail project.

“Longshoreman would be the guys tying up and letting the ships go, but our local said, ‘no, the risk isn’t worth the reward,’” said Cager Clabaugh, president of the Local 4, ILWU. “We don’t believe in jobs at any cost.”

The ILWU Local 4 is requesting people call Washington Gov. Jay Inslee to ask him to end the labor lockout and reject the Tesoro oil terminal. Now is the time for labor and enviros to stand together for clean water and safe working conditions.