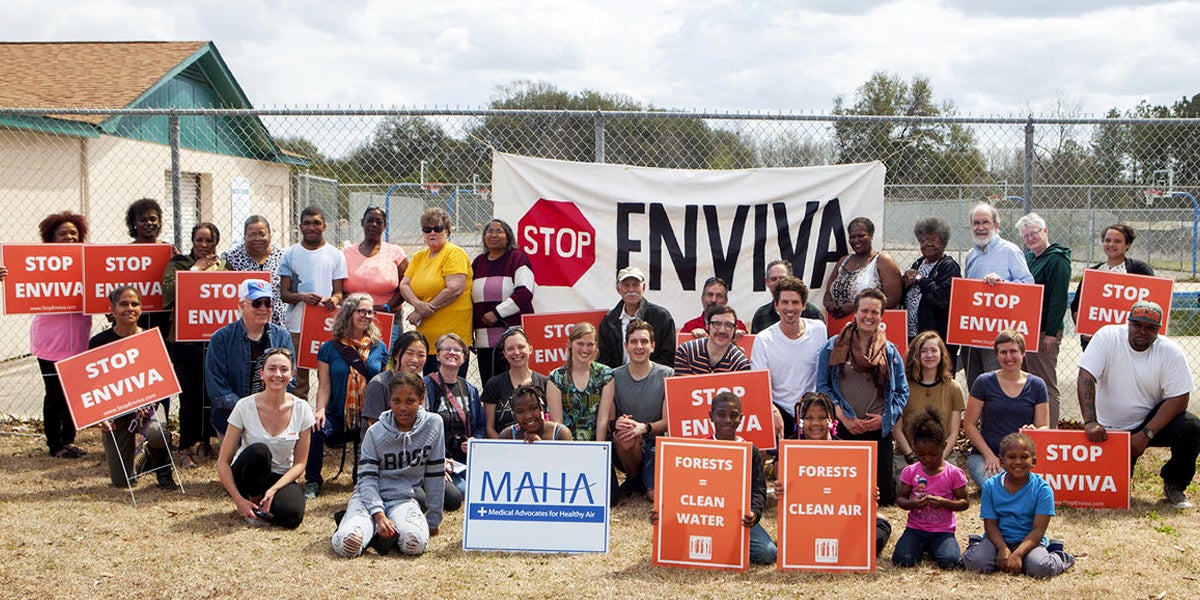 Debra David lives with her two sisters, Mary and Betty, in their childhood home in Dobbins Heights, a North Carolina town of fewer than 850 people. Her family has been here for generations, and at 60 years old, David doesn’t plan on leaving—no matter how rough life gets in her neck of the woods.

Dobbins Heights may be small and rural, but it has become increasingly packed with polluting industries over her lifetime. Within five miles of the David home sits a CSX railroad station, a Duke Energy–Smith Energy complex, a Piedmont Natural Gas resource center, and thousands of chickens at a Perdue processing plant. On top of the unpleasant smells and loud noises emanating from the facilities (and their trucks, trains and livestock), they spew diesel exhaust, nitrogen oxides, sulfur dioxides, carbon monoxide and poultry dust into the air of this largely African-American community.

David, who belongs to a grassroots environmental justice group called the Concerned Citizens of Richmond County, says the town is struggling. With the median household income at $21,000, its residents are scraping by. According to the Richmond County Health Department, deaths from lower chronic respiratory diseases, such as emphysema and asthma, are higher at Dobbins Heights than in the rest of the state, and about twice as many people are hospitalized for asthma than in the surrounding counties. David is a breast cancer survivor, her sisters are both diabetic, and of their eight next-door neighbors, five either use inhalers or are on oxygen. 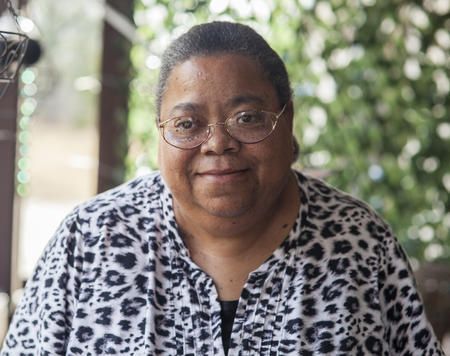 Debra David, a resident of Dobbin Heights and a breast cancer survivor, is concerned about yet another polluting industry coming into her town.Call to Action Media

While many social, economic and lifestyle factors contribute to illnesses, David and other residents can’t help but wonder how much the state of the community’s health can be blamed on the industries wooed there with property tax breaks and cash incentives to buoy the economy. And now, another polluter wants to come to town: a proposed biomass plant that would emit wood dust and other particulates, as well as strip their forests of trees.

The North Carolina Department of Environmental Quality (DEQ) recently granted Enviva, the country’s largest exporter of wood pellets, an air-quality permit for the plant. It was the last hurdle for the energy giant before it could break ground in Dobbins Heights.

But the community has had enough. With the help of the Southern Environmental Law Center, Dogwood Alliance, and other environmental groups, the Concerned Citizens of Richmond County are challenging the DEQ’s approval. Among other issues, the group says the community was not given the chance to voice their concerns about a possible new source of pollution in their backyard.

“There is a history of intimidation and oppression in the rural south,” said Emily Zucchino, the community network manager for Dogwood Alliance, a nonprofit focused on protecting southern forests. “In Richmond County, we see commissioners rolling out the red carpet for Enviva, while concerned citizens are silenced or ignored.”

The fight isn’t just shedding light on life in Dobbins Heights but also on the biomass industry itself. Touted as a clean energy alternative to fossil fuels, the industry began taking off about five years ago, and wood pellet production has been on the rise ever since. Most of the five million tons of wood pellets produced in 2015 (an almost 13 percent increase from the previous year) were exported across the Atlantic to help European countries meet their renewable energy mandates.

But, there’s a hitch. Though wood can be a renewable resource when forests are replanted, it’s not nearly as clean as, say, wind or solar. “The big problem is that people have treated biomass as if it’s carbon-free,” said Timothy Searchinger, a Princeton University researcher with a focus on bioenergy. “The thinking is, if you cut down a tree and a tree comes back, it’s free. But cutting down a tree for fuel is always worse than fossil fuels.”

Burning a tree releases the carbon it had been storing into the atmosphere, and it takes years for another such carbon bank to grow in its place. A recent study by Chatham House, a London-based think tank on sustainability issues, shows that biomass fuels increase carbon emissions for many decades to come compared to other polluting energy sources such as coal.

What does all this mean for Dobbins Heights? Fewer trees, more pollution, and more congestion. (The company would also invest $107 million into Richmond County and create 79 jobs, but according to Zucchino, those opportunities won’t necessarily go to locals). If built, the plant would collect trees from within a 75-mile radius, and while Enviva says it relies on wood waste, such as tree trimmings and scraps from mills, a forestry consulting company named Forisk has shown otherwise. For example, Forisk calculates that the majority of the wood used at Enviva’s Ahoskie, North Carolina, mill comes from hardwood trees, including those typically found in wetland forests. 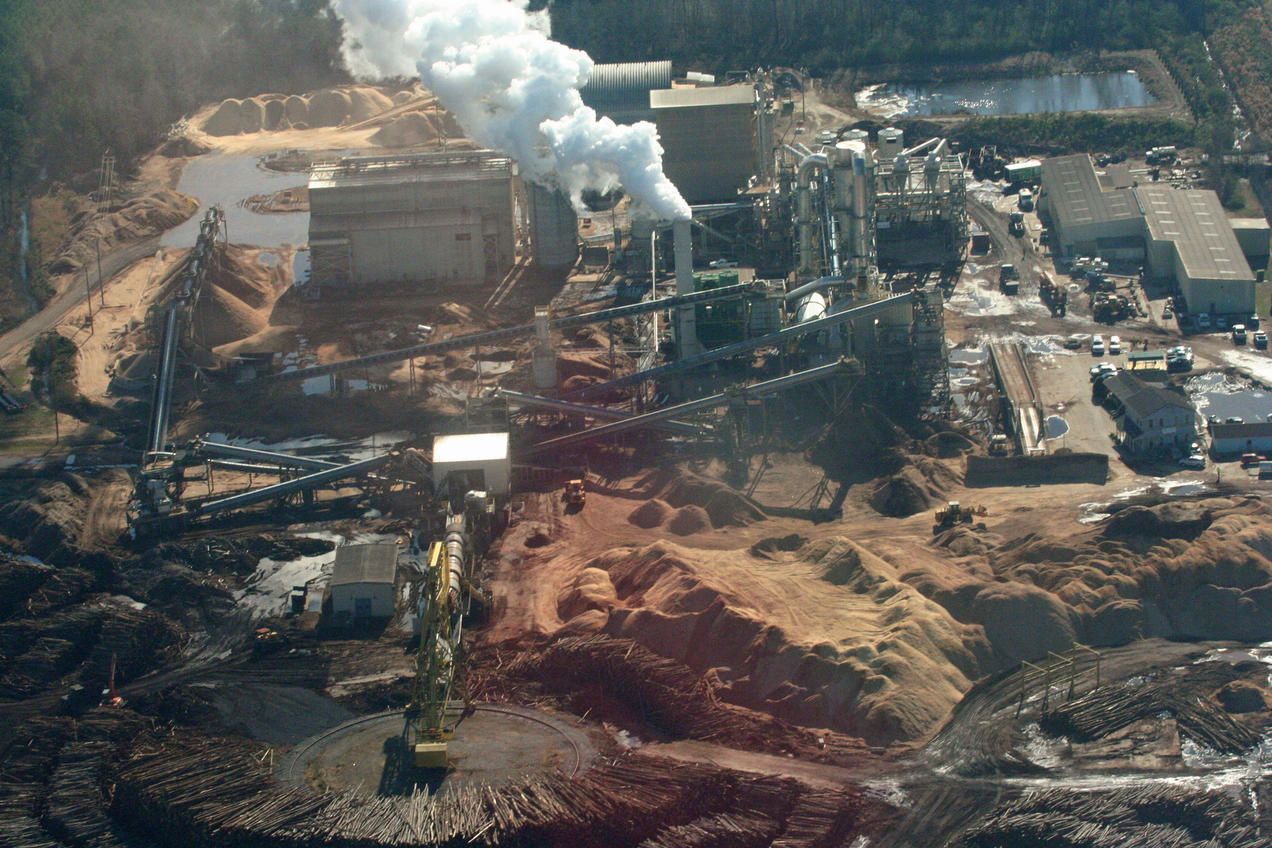 Natural Resources Defense Council (NRDC) and Dogwood Alliance are tracking the types of trees being delivered to Enviva’s Ahoskie and Sampson plants in eastern North Carolina. They’ve documented trucks, piled high with tree trunks, some cut from mature bottomland hardwood forests that provide critical habitat to many rare and imperiled species, according to NRDC scientist Sami Yassa. These forests contain bald cypress, swamp tupelo, and red ash trees (to name a few), which grow in streams and floodplains and provide natural flood protection. Unfortunately, these species are also slow to regenerate.

Much of the timber harvested in the South comes from privately owned and largely unregulated land, said Debbie Hammel, a bioenergy and sustainable forest specialist at NRDC. So it’s hard to know what the industry is up to—and how it might be affecting fragile water systems or endangered and threatened species, such as the bald eagle, American black bear, and Rafinesque’s big-eared bat. “The Southeast is the wild west of forestry,” Hammel said.

Private landowners don’t necessarily benefit from the biomass industry, either. Jean Bryson, a tree farmer in Sampson County, the site of another Enviva plant (one of three others in the state), writes in a 2016 Clinton Chronicle (South Carolina) letter to the editor: “There are not that many hardwood forests left, and the ones that are replanted after cutting are replanted with pines. The pines do not grow enough to be cut again in 10 years.” Bryson also complained about the noise, sawdust, number of trucks and increased traffic accidents that have come to the area.

Dobbins Heights faces a similar fate. “The reality is, if Enviva didn’t care in the past in places like Sampson County, where people can’t sleep, they’re not going to care now,” said Cary Rodgers, a pastor and the North Carolina environmental justice coordinator for Blue Ridge Environmental Defense League.

And that’s just what David and her sisters worry about. “There’s going to be a lot more pollution coming to what we already have,” she said. “In a little town, all this pollution is just pushing us out the way.”