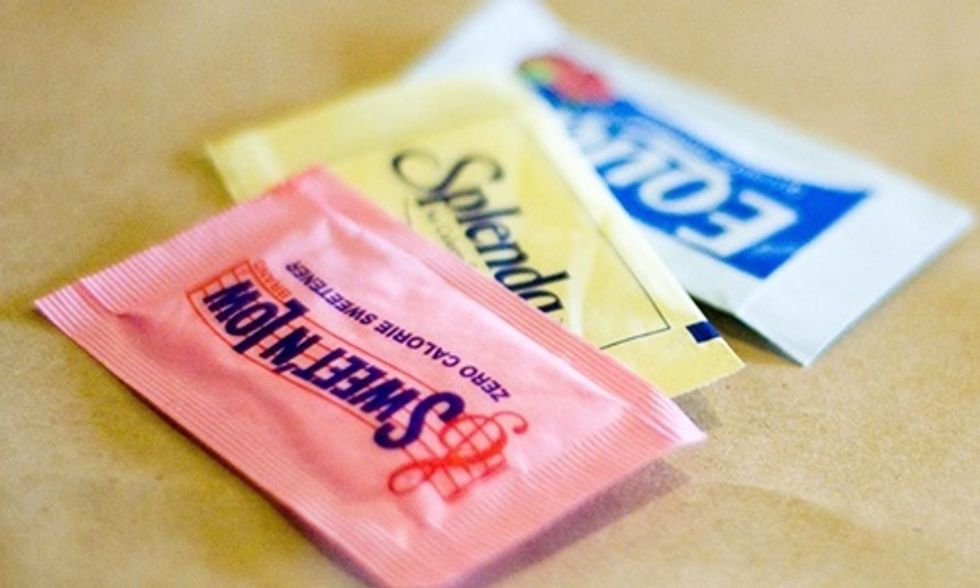 Sugar is a hot topic in nutrition. Cutting back can improve your health and help you lose weight.

Artificial sweeteners are synthetic chemicals that stimulate the sweet taste receptors on the tongue. They are often called low-calorie or non-nutritive sweeteners.

This article takes a look at the science behind these claims.

What are Artificial Sweeteners?

Artificial sweeteners are synthetic chemicals that stimulate the sweet taste receptors on the tongue. They are often called low-calorie or non-nutritive sweeteners.

Artificial sweeteners give things a sweet taste, without any added calories (1).

Therefore, they're often added to foods that are then marketed as “health foods" or diet products.

They're found everywhere, from diet soft drinks and desserts, to microwave meals and cakes. You'll even find them in non-food items, such as chewing gum and toothpaste.

Here's a list of the most common artificial sweeteners:

What Causes Blood Sugar and Insulin Levels to Rise?

We have tightly controlled mechanisms to keep our blood sugar levels stable (2, 3, 4).

Potatoes, bread, pasta, cakes and sweets are some foods that are high in carbohydrates.

When digested, carbohydrates are broken down into sugar and absorbed into the bloodstream, leading to an increase in blood sugar levels.

When our blood sugar levels rise, our body releases insulin.

Insulin is a hormone that acts like a key. It allows blood sugar to leave the blood and enter our cells, where it can be used for energy or stored as fat.

If blood sugar levels drop too low, our livers release stored sugar to stabilize it. This happens when we fast for prolonged periods, like overnight.

There are theories on how artificial sweeteners may interfere with this process (5).

1. Insulin is released in response to the sweet taste.

2. Regular use changes the balance of our gut bacteria. This could make our cells resistant to the insulin we produce, leading to both increased blood sugar and insulin levels.

So, a can of diet coke, for example, won't cause a rise in blood sugar.

However, in 2014, Israeli scientists made headlines when they linked artificial sweeteners to changes in gut bacteria.

Mice, when fed artificial sweeteners for 11 weeks, had negative changes in their gut bacteria that caused increased blood sugar levels (6).

When they implanted the bacteria from these mice into germ-free mice, they also had increases in blood sugar levels.

Interestingly, the scientists were able to reverse the increase in blood sugar levels by changing the gut bacteria back to normal.

However, these results haven't been tested or replicated in humans.

There is only one observational study in humans that has suggested a link between aspartame and changes to gut bacteria (7).

The long-term effects of artificial sweeteners in humans are therefore unknown (8).

It is theoretically possible that artificial sweeteners can raise blood sugar levels by negatively affecting gut bacteria, but it hasn't been tested.

Bottom Line: In the short-term, artificial sweeteners won't raise blood sugar levels. However, the long-term effects in humans are unknown.

The effects also vary between different types of artificial sweeteners.

Both animal and human studies have suggested a link between sucralose ingestion and raised insulin levels.

In one study, 17 people were given either sucralose or water and then administered a glucose tolerance test (9).

Those given sucralose had 20 percent higher blood insulin levels. They also cleared the insulin from their bodies more slowly.

However, results are mixed and other human studies have shown no effect (10).

Aspartame is perhaps the most well-known and most controversial artificial sweetener.

However, studies have not linked aspartame with raised insulin levels (11, 12).

Scientists have investigated whether stimulating the sweet receptors in the mouth with saccharin leads to an increase in insulin levels.

One study found that mouth washing with a saccharin solution (without swallowing) caused insulin levels to rise (13).

One study in rats looked at how injecting large amounts of acesulfame-K affected insulin levels. They found a massive increase of 114-210 percent (16).

However, the effect of acesulfame-K on insulin levels in humans is unknown.

The effect of artificial sweeteners on insulin levels seems to be variable and the results are inconclusive. It may also depend on the individual.

For now, no high-quality human trials exist, so we don't definitively know their effects on insulin.

Bottom Line: Sucralose and saccharin may raise insulin levels in humans, but the results are mixed and some studies find no effects. Acesulfame-K raises insulin in rats, but no human studies are available.

Can You Use Artificial Sweeteners if You have Diabetes?

Diabetics have abnormal blood sugar control due to a lack of insulin and/or insulin resistance.

However, the health implications of long-term use are still unknown.

Bottom Line: Artificial sweeteners do not raise blood sugar levels and are considered safe alternatives to sugar for diabetics.

Should You Avoid Artificial Sweeteners?

Artificial sweeteners have been declared safe by regulatory bodies in the U.S. and Europe.

Although artificial sweeteners may not be “healthy," they are at the very least significantly “less bad" than refined sugar.

If you eat them as part of a balanced diet, then there is no strong evidence that you should stop.

However, if you're concerned, then you can use other natural sweeteners instead or just remove sweeteners altogether.

8 Processed Foods You Can Easily Make at Home From Scratch