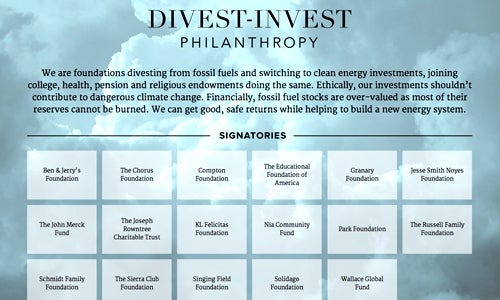 With a shift of nearly two billion dollars away from fossil fuels, the divestment campaign has moved into new territory.

Last week, seventeen of the world’s largest philanthropic foundations announced commitments to pull their money out of fossil fuel companies and reinvest it in the clean energy economy. 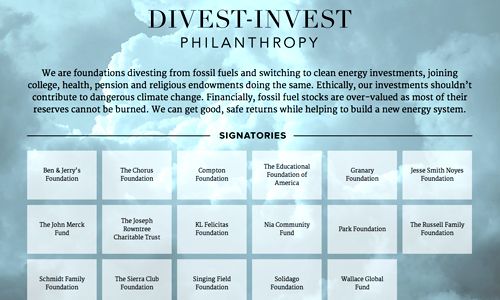 The newly formed Divest-Invest coalition urges other organizations to take an ethical stand and voice their concern for communities most vulnerable to climate change and the future of the global economy.

The announcement is seen as a signal that the divestment movement is no longer limited to progressive cities and college campuses.

Now, a wide range of some of the world’s largest foundations including the Park Foundation, Russell Family Foundation, Educational Foundation of America and John Merck Fund are taking a stand for the climate by aligning their investments with the values of their charitable missions.

This announcement is the latest in a week of news signalling that the divestment movement is going mainstream.

Meanwhile Norwegian pension fund and insurance firm Storebrand announced last week that it too would be divesting from another 10 fossil fuels companies—having announced it had divested from 19 dirty fuel companies last year.

The firm said it aimed to reduce its exposure to the fossil fuel industry in a bid to ensure long-term stable profits.

To date, 22 cities, two counties, 20 religious organizations, nine colleges and universities and six other institutions have signed up to rid themselves of investments in fossil fuel companies.

In addition to these divestment announcements, many major banks and financial institutions have limited or halted their lending to coal projects, arguably the dirtiest of the fossil fuels.

Three of the world’s biggest public financial institutions, the European Investment Bank, World Bank, and European Reconstruction and Development Bank have committed to restrict their support for coal projects in favor of clean energy and energy efficiency.

It’s wrong to profit from wrecking the climate—and it looks bad, too.

A recent study by Oxford University found that the divestment campaign has triggered an uptick in negative perceptions of fossil fuel companies.

Fund managers who choose to continue investing in dirty energy must now face the realization that these investments could contaminate their organization’s brand and undermine its image.