Divest or Else: How Hip-Hop Can Help Save the Planet 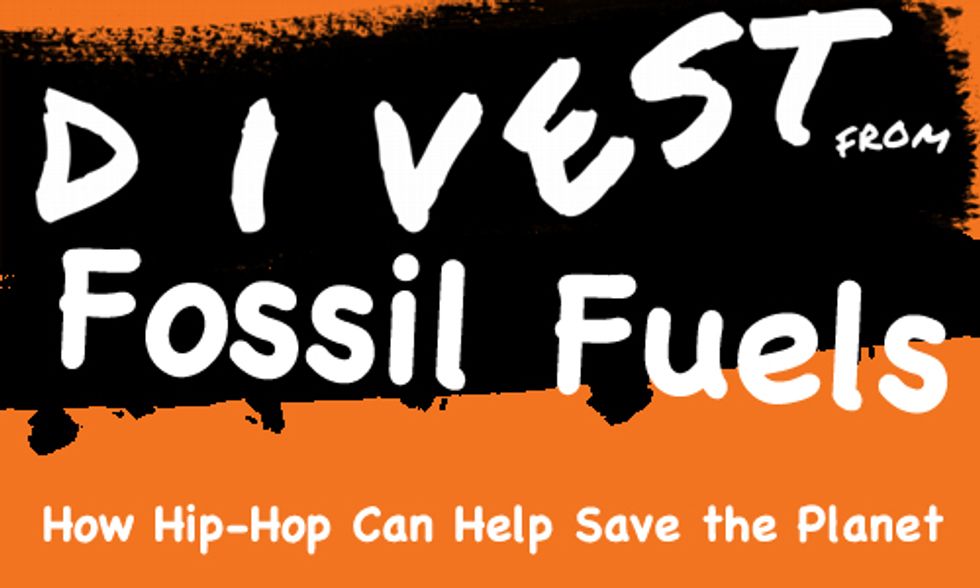 Since Hurricane Katrina destroyed much of New Orleans and the Gulf Coast, America’s poor urban populations have known that climate change is more than a cause for the liberal, college-educated elite. Communities of color also suffer far higher rates of cancer, asthma and other diseases because pollution in their neighborhoods is worse.

Yet for too long, the mainstream environmental movement has failed to reach demographics outside a narrow, self-defined “base.” In the process, it has limited its political power and missed opportunities to build the kind of majority needed to secure fundamental change in energy use and our broader economy.

And it the aftermath of America’s midterm elections, prospects for meaningful climate change action on Capitol Hill appear bleak.

Fossil fuel companies possess five times more coal, oil and gas than is considered safe to burn. “This no longer makes them normal companies because it’s unburnable carbon, and therefore stranded assets,” says Bill McKibben, author, activist and founder of 350.org. “Over 80 percent of their product has to stay in the ground, because if they carry out their business plan, the planet cooks.”

This new strategy calls on institutions to divest their assets from fossil fuels and invest instead in a clean energy economy. Modeled on the innovation of the anti-Apartheid movement, and on similar efforts against tobacco companies, divestment spread rapidly from college campuses into the faith community, where it has historical resonance.

Fossil fuel divestment has more in common with the creative energy and moral imperative of the early Civil Rights movement than any major environmental campaign in modern times. Activists remember that Martin Luther King, Jr., did not change history by calling for more white-papers. Like King, the new divestment movement confronts its powerful opponent head on.

Signs are it’s working. It took five years to get universities to dump South African stock when confronted with the moral wrongs of Apartheid, and only 156 campuses ever signed on. Already, 738 campuses have pledged to go carbon neutral and more than 300 have active fossil divestment campaigns, making this the fastest growing student movement since the Vietnam War.

And 22 cities, 2 counties and 20 major religious organizations have also pledged to divest.

“Divesting from South Africa was actually a harder ask,” says Thomas Van Dyck, senior vice president of RBC Wealth Management and an advocate for responsible investments. “Back then you were asking large pension funds to eliminate 40 percent of the S&P 500, while only ten percent now are fossil fuel companies.”

But the divestment movement must now reach beyond environmentally conscious campuses to engage with Historical Black Colleges and Universities (HBCUs), and also state governments, civic clubs and local communities to create a broad and diverse coalition.

For poor and minority communities, the stakes couldn’t be. The National Climate Assessment predicts sea level rise so severe that low-lying coastal cities will be inundated. While the rich can move to higher ground, the rest of us will be left behind, dislocated as climate refugees on a scale that will make the Louisiana Superdome post-Katrina look like a picnic.

To those at risk, the stakes are equal or greater than existed on the fields of Gettysburg or on the Edmund Pettis Bridge, because nothing is worth fighting for more than survival.

Which is why, at its core, the fossil fuel divestment movement is about preserving democratic principles, and why climate change has become the civil rights issue of the 21st Century.

To meet this moment, the Hip Hop Caucus has launched campaigns on environmental issues and energy solutions. Along with author Naomi Klein and Archbishop Desmond Tutu, the caucus was a key partner in Bill McKibben’s campus tour promoting fossil fuel divestment and was one of the key organizations in the "Forward on Climate" Rally against the Keystone XL pipeline.

And it’s why the Hip Hop Caucus not only organized the grassroots, but the artist-roots as well, persuading some of the top stars in hip-hop to join our efforts, including Drake and Wyclef Jean with “Green the Block,” Biz Markie on the “Clean Energy Tour,” Eve who stood with us to say #NOKXL, Raheem Devaughn on the “Act on Climate Tour,” and now Common and Malik Yousef who are creating a soundtrack for the climate movement.

Because for all the resources and clout of the environmental movement, it still lacks a certain “cool” factor, which hip-hop can offer because of its appeal in places where not everyone goes to college, hikes for fun or spends afternoons in cafes eating organic food. If we’re successful, a new climate movement, sparked by divestment, will help move environmentalism beyond its traditional confines.

And that is in all of our interests. “It’s important to make the urban community aware this is something we cannot ignore,” says Devaughn. “Climate change is going on right now. And just as hip-hop played a key role in swaying the election for President Obama, we need to use our influence again, for divestment.”

Through the medium of hip-hop music, and the growing movement to divest from fossil fuels, we can build the broader coalition needed to protect our communities and our existence on this planet.