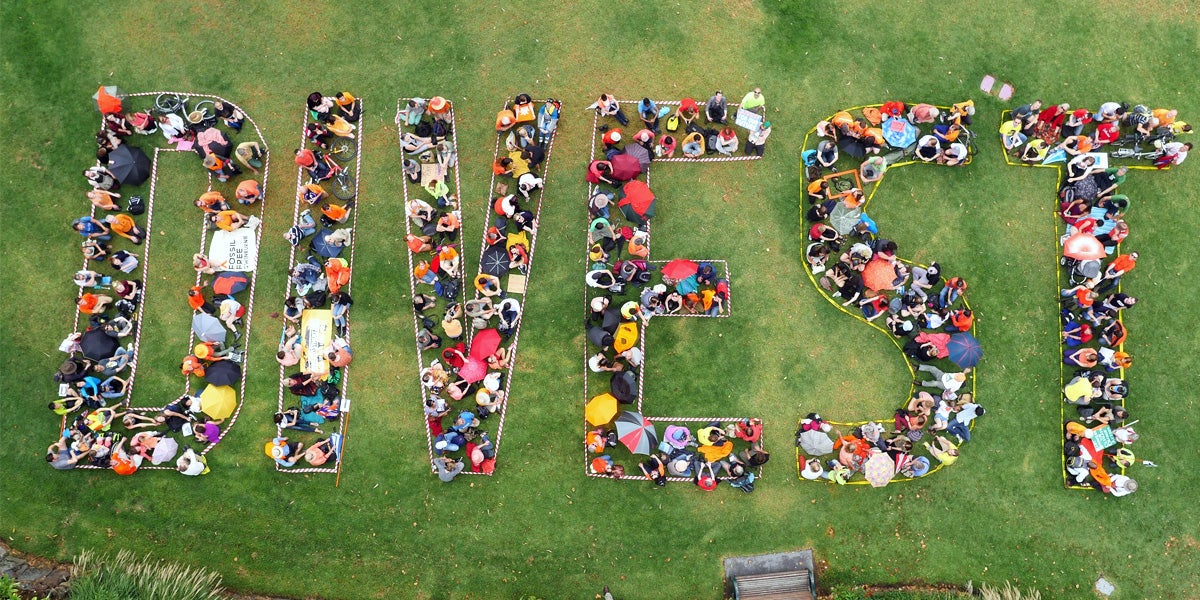 Where goes investment, there goes the climate. This is the fact today as we stand on the brink of locking in irreversible climate change with our fossil-heavy economy. Like never before, institutional investors have the power to make or break the future.

The International Energy Agency published a bombshell report in 2011 noting that our climate fate would be sealed by 2017 without a rapid departure from business as usual. By that year, dangerous warming of more than 2 degrees Celsius would be locked in by a global system of long-lived pipelines, refineries, power plants and transportation systems. Since then, the “safe” level of warming has been tightened further to 1.5 degrees, with evidence that 2 degrees is a death warrant for many island nations.

It’s now 2017 and the pace of the clean energy transition still lags behind the physics. Some say 2 degrees, much less 1.5 degrees, is a pipe dream. The upshot is that every investment we make into our energy system matters, bringing us either closer to or further away from climate hell. By this measure, the policies of China—closing its coal plants and committing hundreds of billions of dollars to renewable energy—are prudent, while the rhetoric and policies of the Trump administration—promising to rebuild America’s coal industry and firing off executive orders to fast track the Keystone XL and Dakota Access pipelines—are retrograde. One creates an enabling environment for progress and thriving, the other is disabling and destabilizing.

In the face of Trump’s commitment to double-down on dirty energy, the DivestInvest movement is more important than ever. The investor class manages trillions in assets that will either be used to build the clean energy future or keep us mired in the past. Luckily, nearly 700 institutional investors managing assets in excess of $5 trillion have made some form of fossil fuel divestment commitment. This includes global insurance companies like Allianz, sovereign wealth funds like Norway’s and preeminent universities, cities, faith organizations and foundations.

Still, to divest is not enough. A commitment to invest in the clean energy future—renewable energy, efficiency, sustainable agriculture and forestry, water and cleantech—is just as crucial. The whole energy system must be rebuilt, reimagined—moving away from a monolith of centralized power stations to a mix of utility grade wind and solar farms, microgrids and distributed clean energy systems. The foundations of DivestInvest Philanthropy understand this and hence their commitment to invest part of their portfolio annually into climate change solutions.

Investors in the future have the markets at their backs: Electricity from solar and wind power is now as cheap—or cheaper—than its fossil counterparts in much of the world.

Batteries are sailing down their cost curves with price reductions of 60 percent or more over the past 6 years. Electric vehicles are projected to hit parity with gasoline cars by 2022, a point totally disruptive to the oil industry. 2015 saw the world’s highest annual investment into clean energy of almost $350 billion. Renewable energy comprised more than half of all new power-generating capacity that year, overtaking coal in total installed power capacity worldwide. Coupled with the formidable market signal of the Paris climate agreement, investors in the clean energy economy are in pole position to do well while doing good.

Meanwhile, the carbon bubble is bursting—sometimes quickly, sometimes slowly. Coal’s fall was fast and furious: The Dow Jones U.S. Coal Index dropped more than 80 percent over the past five years and former lions of industry Peabody and Arch Coal have filed for bankruptcy. Oil and gas seem poised to limp along a few more years, though prices remain depressed and volatile. Last month, Chevron posted its first loss in decades, while Exxon saw its smallest quarterly profit in 17 years: Most striking, it also wrote off $2 billion in gas fields—finally admitting it was not immune to stranded assets. Shell itself says that oil demand will likely peak within the next five years followed by precipitous declines as electric vehicles come on-line en masse.

Yet, among institutional investors, there remains anxiety around the perceived lack of green products to sink their teeth into. But two new reports by Mercer and Croatan Institute chip away at the myth that there are not adequate investment opportunities into the clean energy future. Each assessment takes a portfolio-wide approach, looking at opportunities across all asset classes of a typical institutional portfolio.

The Mercer work provides the most comprehensive analysis of funds consistent with the DivestInvest pledge, looking at opportunities across public equity, fixed income, absolute return/hedge funds, private equity and infrastructure. The emphasis is on commingled institutional investment vehicles (pooled funds), rather than mutual funds, which have been catalogued by other groups. Mercer’s full product list is available to DivestInvest signatories.

Meanwhile, the Croatan Report explores investments in climate solutions that also have a direct benefit to the local community. Many of the investments featured in the Croatan Report are consistent with the notion of a Just Transition, the idea that the clean energy transition should not recreate old and broken power structures that benefit the few at the expense of the many: Rather, investments should be made with intention to revive and rebuild communities, fostering job creation and local ownership of renewable energy systems where possible. The report is anchored in inspiring case studies featuring DivestInvest Philanthropy members.

These reports are essential contributions—showing that there is a robust and growing supply of investment-grade opportunities in the clean energy transition. In 2017, the stakes couldn’t be higher.