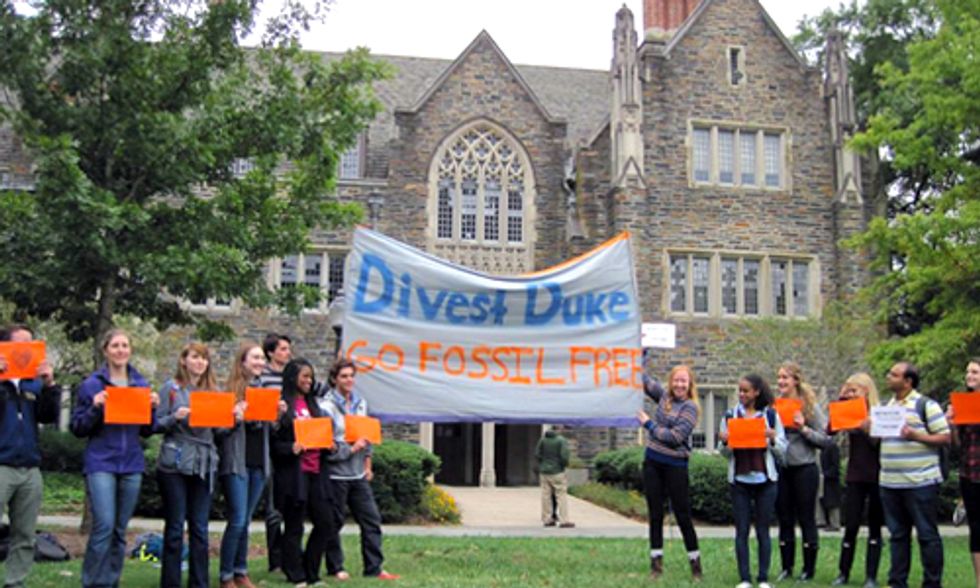 Laura Mistretta is a senior Environmental Science and Policy major at Duke University's Nicholas School of the Environment.

As a student of environmental science I have made it a priority to understand the root causes of climate change in the hopes of contributing to a solution. My classes have highlighted numerous possible points of intervention: scientific research, policy, lifestyle changes and of course education. However, this past year I have been pursuing a solution based in economics and investment, two topics I knew very little about and rarely associated with solving climate change.

I am of course talking about fossil fuel divestment. Though I have known for a while now that burning fossil fuels releases greenhouse gases, which cause climate change, much of the discussion on this topic in my classes focused on the need to research and develop renewable sources of energy rather than challenge the existing energy regime. However this year, I have had the opportunity to do just that as a part of Divest Duke.

Sixty-five percent of the world’s greenhouse gas emissions are a product of burning fossil fuels in order to generate electricity, heat buildings, power vehicles, etc. We all use and depend on fossil fuels on a daily basis. However, the uncomfortable truth is that if we intend to limit the warming of the planet to the Intergovernmental Panel on Climate Change recommended 2°C, 60-80 percent of the current fossil fuel reserves held by the top fossil fuel companies must remain in the ground.

These sobering facts have helped launch fossil fuel divestment campaigns at more than 500 colleges and universities across the nation. Thus far the majority response from administrators and university presidents at the country’s most prestigious academic institutions such as Harvard, Cornell and Brown, has been “No."

The most oft cited reasons that university presidents have given in support of their decision not to divest are:

In response to the first argument about shareholder advocacy, while it can be an effective way of creating change in regards to fossil fuel companies, their entire business model is based around finding, refining and burning more and more fossil fuels. In order to avoid climate disaster we need to see a major shift in how we produce energy. Shareholder advocacy might work for smaller changes such as fairer labor practices, but we need to send a message to fossil fuel companies that it is socially irresponsible for them to continue operating as they do at a very fundamental level.

The second argument regarding the hypocrisy of divesting while we still depend on fossil fuels is quite flawed. Yes, it is unfortunate that we are so dependent on fossil fuels, but we need to start somewhere. Fossil fuel companies are not going to change out of the goodness of their hearts. They need to be shown that people are serious about demanding change.

In our highly market-based economy, money is a powerful force. Removing one’s money from a company is a great way to demonstrate you do not support that company’s practices in a language they will understand loud and clear. Plus, it frees up money to invest in renewable energy projects and research to help speed along the energy transition.

The third argument that divesting from fossil fuels could hurt the endowment is incredibly short sighted. Pressure is already mounting against the fossil fuel companies, particularly the coal industry. The percentage of electricity produced in the U.S. by burning coal is shrinking fast and coal assets are decreasing in price. As divestment campaigns continue to spread and gain traction, it is not unreasonable to think that the same fate awaits oil and gas, causing some financial analysts to warn of an impending “carbon bubble.”

Additionally, as the demand for environmentally responsible investment portfolios increase, it will become easier and easier for major institutions to divest. Furthermore divesting from fossil fuels has the potential to improve endowment returns as a number of divested portfolios have enjoyed increased returns as compared to a typical portfolio including fossil fuels.

Divest Duke is making great strides, having submitted our formal divestment proposal to the Advising Committee on Investment Responsibility. We eagerly await their comments and are committed to continue raising awareness and support on campus until Duke agrees to begin phasing out fossil fuels from their investment portfolio.

No one is saying that divesting from fossil fuels is going to be easy, but I can’t think of a better reason to try hard than to prevent massive climate disruption.