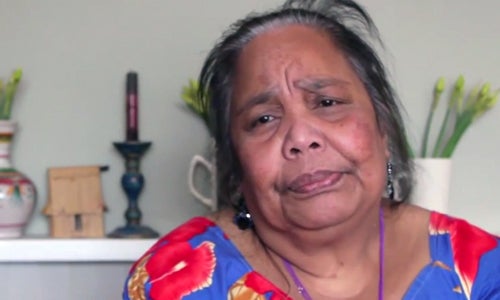 Scientists predict that Kiribati—a remote Island Republic in the Central Pacific—could be lost to rising sea levels in the next 50 years. A recent study by researchers at the University of California Irvine and NASA finds that six massive glaciers in the Amundsen Sea sector “have passed the point of no return,” clearly showing how melting glaciers greatly impact low-lying islands like Kiribati.

Tinau (My Mother), by filmmaker Victoria Burns, provides an intimate family portrait of a Kiribatese mother that left her disappearing homeland of Kiribati and is now settled in the UK.

Tinau was one of two films to win a special prize in the Action4Climate video competition for its ability to present a local story that also has a profound global impact.

In an interview with filmmaker Victoria Burns, she shared her reasons for making this film. “My mother’s home island of Kiribati is predicted by some scientists to be one of the first countries to disappear due to rising sea levels,” said Burns. “Generally speaking most people aren’t familiar with Kiribati because of the country’s remoteness. Due to its relative seclusion, it would be so easy for people to think who cares? With the issue so close to my heart, I felt it my responsibility to share my mother and family’s story to raise awareness on the situation.”

When asked about future plans, Victoria replied, “I hope in the future to make a longer form documentary on climate change shot out on location in Kiribati and the Pacific. My film Tinau is just the beginning of the story and I believe there is still so much more to say. The potential impacts of climate change are widespread and varied throughout the world, Kiribati’s fate just one strand of many.”

Victoria shared the impact the Action4Climate video competition has had on her career, “I’ve personally found the Connect4Climate campaign and the Action4climate competition as the biggest impact with my engagement with the climate change movement. As a result of the competition I tuned into a community of peers, watched an array of stories from across the world and been inspired to become a better filmmaker and advocate in the climate change movement!”