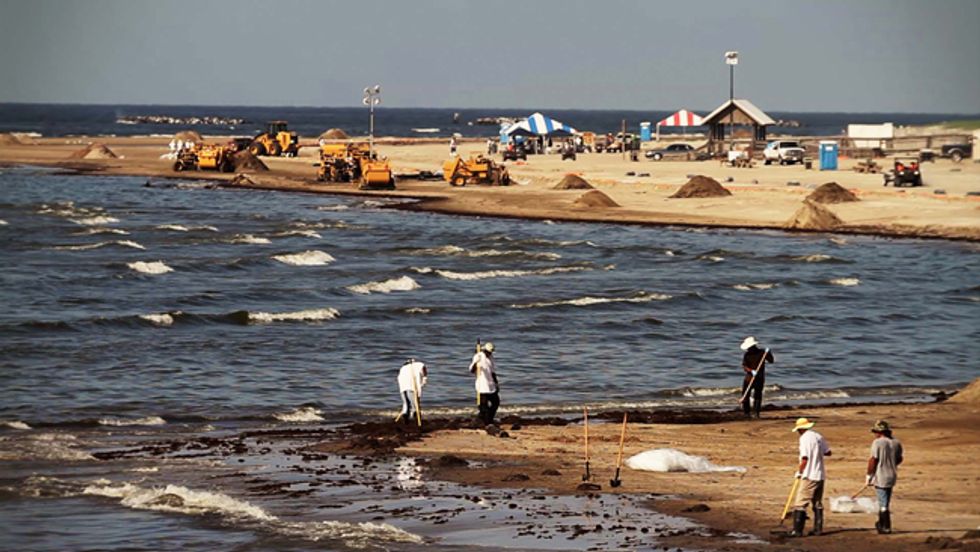 Today's the opening of the 36th annual Cleveland International Film Festival (CIFF)—one of my favorite days of the year. I love the opportunity to see a wide variety of films that expands my knowledge on issues that matter. CIFF is one of the nation's finest film festivals with more than 160 feature films and 160 short subjects from 60 countries, including five awards determined by audience vote, FilmSlam for students which leads to thought-provoking discussions in the classroom, the Greg Gund Memorial Standing up Film Competition which includes "films with a conscience" that especially celebrate social justice and activism, and more.

This year, EcoWatch is sponsoring Dirty Energy, a 90-minute documentary that tells the untold story of the disastrous effects that the Deepwater explosion and oil spill in the Gulf of Mexico had, and is still having, on the economy and people of America's Gulf Coast. If you want a true accounting of what is still going on after the biggest accidental oil spill in world history see Dirty Energy.

In an interview, filmmaker Bryan D. Hopkins said that the filming took place over two trips, the first, for about three weeks, and the second, about nine months later after the Deepwater well had been capped, for an additional two weeks. The editing of the raw footage took three to four months. "Dirty Energy, represents a tremendous labor of love for me," he said.

Here's Hopkins eloquent synopsis of the film: "April 20, 2010, the Deepwater Horizon drilling rig abruptly exploded into flames just 50 miles from the coast of Louisiana tragically taking the lives of 11 workers. After burning for two days it sank to the floor of the Gulf  as millions of barrels of oil poured from the wellhead 5,000 feet below the surface creating one of the worst environmental disasters in history.

"As the horrific events unfolded, reporters and cameramen rushed to the scene to document the catastrophe that was swiftly consuming the nation. Photographs of oil-soaked birds, vast expanses of contaminated water and boom stretching for miles covered the front pages of newspapers and television screens. Troubling stories of journalists being barred from public beaches and open waters (some being threatened with arrest) were recounted almost nightly. The British Petroleum Oil Spill was the media event of the summer.

"Throughout the ensuing weeks BP made several unsuccessful attempts to stem the flow of oil. And as those weeks turned into months the estimated daily flow rate from the well grew from a mere 1,000 to 62,000 barrels surpassing the total amount of oil spilled during the Exxon Valdez Spill every five days. That summer the BP oil spill polluted thousands of miles of ocean and shoreline, laying siege to a community that was only starting to recover from the devastating effects of Hurricane Katrina. Finally, on July 15, 2010, BP announced the leak was capped and as quickly as they came the cameras and news reporters disappeared from the shores of the Gulf of Mexico leaving its people alone to fend for themselves as public interest evaporated.

"Dirty Energy tells the personal story of those directly affected by the spill and who are now struggling to rebuild their lives amidst the economic devastation and long-term health risks. This is a story too often glossed over by the mainstream media, and ignored by those sent to Washington to represent the will of the people, not the corporations. The systematic failures by BP, the Coast Guard, and the federal government, at large, to properly confront this environmental calamity with honestly and integrity has had powerful consequences, and sadly the human cost has been greatly underestimated and hidden from the public. The BP oil spill and its subsequent corrupt profit-driven cleanup efforts have not only relentlessly polluted the Gulf ’s natural environment, but have permanently dirtied the lives, relationships and social cohesion of its people.

"Now, with the disaster’s second anniversary approaching, the fate of the Gulf is still largely unknown. The economic, environmental and health effects of the spilled oil, as well as the toxic chemicals used to disperse it have yet to be even properly addressed, no less formally studied, and BP has still not sincerely committed itself to making the Gulf of Mexico whole again as it repeatedly promised. Right now, the people of the Gulf are fighting for their livelihoods and desperately trying to preserve their endangered way of life."

Hopkins said that "the idea to do this project was born of the tremendous guilt I felt at watching another disaster hit our country, yet doing nothing more than watching the TV screaming. I decided to take action. I packed my bags, hit the road and posted on Facebook for donations since I only had gas money ($200) to my name. Luckily, through the kindness of friends and locals, this amazing journey was possible.

"When I arrived in Louisiana, I had grand plans of leading the film into a conclusion that supported green energy and sustainability, but that would misrepresent the vast majority of the people I was speaking with. They were scared about poisoned food, not pretty water. I was looking from the outside in and doing much of what the media had already done by putting this tragedy into the big context, but that only gave the illusion of understanding. How do locals truly feel? This is the question I tried to answer."

If you can make it to this year's CIFF, DIRTY ENERGY will be playing at the following times:

For more information on the films that will be playing at CIFF, click here.  For a listing of the It's Easy Being Green Films, click here.

In addition to the It’s Easy Being Green films at this year's CIFF, the following events will take place at the Sustainable Cleveland Center on the third floor of Tower City in Cleveland, Ohio: