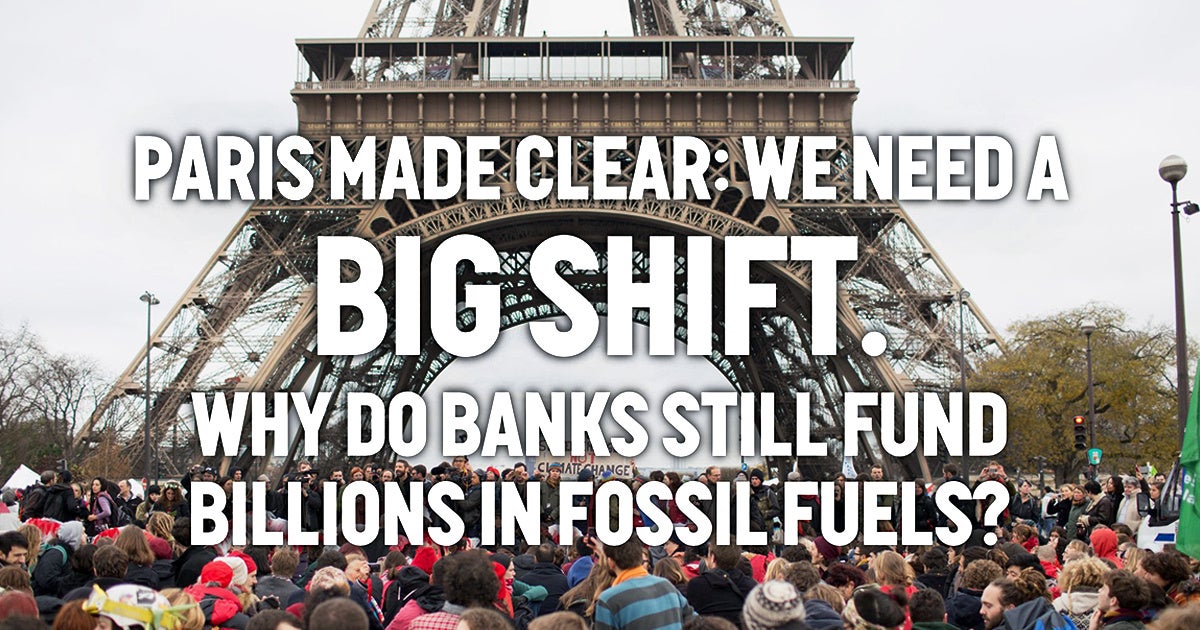 As world leaders and global financial institutions gather for the One Planet Summit on Dec. 12 in Paris, civil society groups have come together under the Big Shift Global campaign to underscore the massive finance gap remaining to shift away from fossil fuels and toward clean energy, in line with the aim of the Paris agreement on climate change to limit warming to below 1.5°C.

Monday, these groups released a briefing titled Dirty Dozen: How Public Finance Drives the Climate Crisis through Oil, Gas, and Coal Expansion, highlighting fossil fuel projects by the World Bank Group, other multilateral and national development banks and export credit agencies. These projects are examples that demonstrate how public finance is still acting as a critical lifeline for destructive fossil fuel projects, many of which could not otherwise be built, and how this support continues to this day, a full year after the Paris agreement entered into force.

On average, public finance institutions controlled by G20 governments, along with multilateral development banks such as the World Bank Group, provide $71.8 billion per year in public finance for fossil fuels, and only $18.7 billion in public finance for clean energy (figure taken from from the report Talk is Cheap: How G20 Governments are Financing Climate Disaster, July 2017).

“It’s been over a year since the Paris agreement on climate change entered into force, and two years since it was agreed—yet our governments still provide billions more in public finance for fossil fuels than for clean energy,” said Alex Doukas, director of the Stop Funding Fossils Program at Oil Change International. “This briefing highlights some of the most egregious fossil fuel projects receiving government financing, including exploration for more oil and gas that can never be burned if we have any hope of limiting the damage from climate change.”

Accompanying the briefing, more than 175 civil society groups from over 55 countries have signed a letter urging multilateral development banks (such as the World Bank Group), export credit agencies, and the governments backing them to stop funding fossil fuels by 2020, with an urgent and immediate need to move away from financing for oil and gas exploration projects, coal mining and coal-fired power plants.

The Dirty Dozen briefing presents a wide spectrum of dirty projects, ranging from the Southern Gas Corridor (SGC) project running from Azerbaijan to Italy (the European Investment Bank will consider a proposed 1.5 billion EUR loan for the Trans-Adriatic Pipeline, the final leg of the SGC, at its Dec. 11-12 board meeting), to the 1,000-MW Cirebon 2 coal plant in Indonesia. The World Bank Group, European Investment Bank, European Bank for Reconstruction and Development, Asian Development Bank and Asian Infrastructure Investment Bank together have offered $8.07 billion to the SGC in approved and proposed loans and guarantees out $45 billion in estimated project costs, while the Cirebon 2 coal plant is receiving almost $1.15 billion in finance or guarantees from the Japan Bank for International Cooperation and the Korea Export Import Bank, two of the world’s biggest coal financiers.

See the full list of the Dirty Dozen projects here.