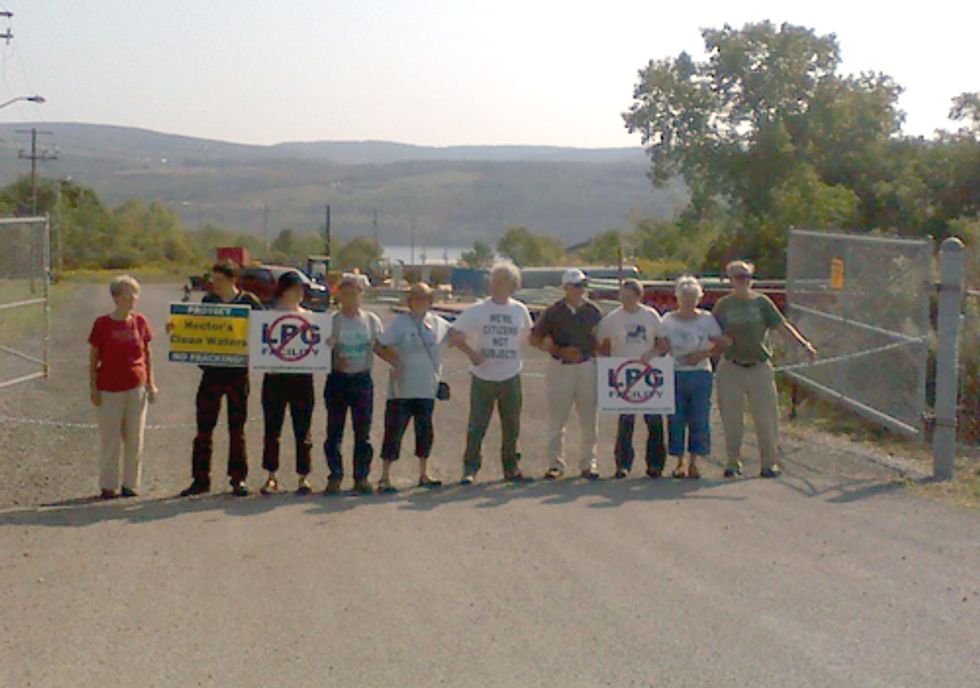 I am chained to a fence outside an Inergy facility near Watkins Glen, New York, and I am not alone.

We are protesting the gasification of New York. We don't want fracking in this state (or any state), and we don't like Inergy's plans to build a gas storage hub in Seneca Lake salt caverns.

2. Even if nothing goes wrong, there will be plenty wrong. The Inergy project will change the character of our rural area by increasing the levels of traffic, noise and pollution. Just the pollution alone will kill people, and gas development will surely harm our existing winery, agricultural and tourism industries.

3. Inergy can't be trusted. Inergy has been caught in so many lies and is keeping so many secrets that it has no credibility whatsoever. It cannot be relied on as a guardian of public safety.

4. The Inergy project is clearly meant to facilitate the fracking of New York, Ohio and Pennsylvania. We adamantly oppose fracking and consider it catastrophic folly. We want the Inergy project stopped because of its own lack of merit, and also as part of the larger effort to stop fracking.

5. We resent the fact that, even though we live here, we have been given no say in what happens to our area. We know, for example, that the DEC is keeping secrets for Inergy. And we know that the DEC sent proposed fracking regulations to the gas companies for review, before finalizing them and releasing them for public comment. No such opportunity was afforded to the industry's opponents. We cannot remain silent while a demonstrably biased agency makes decisions behind closed doors that could forever change our way of life.