7 Different Kinds of Salt and How to Use Them 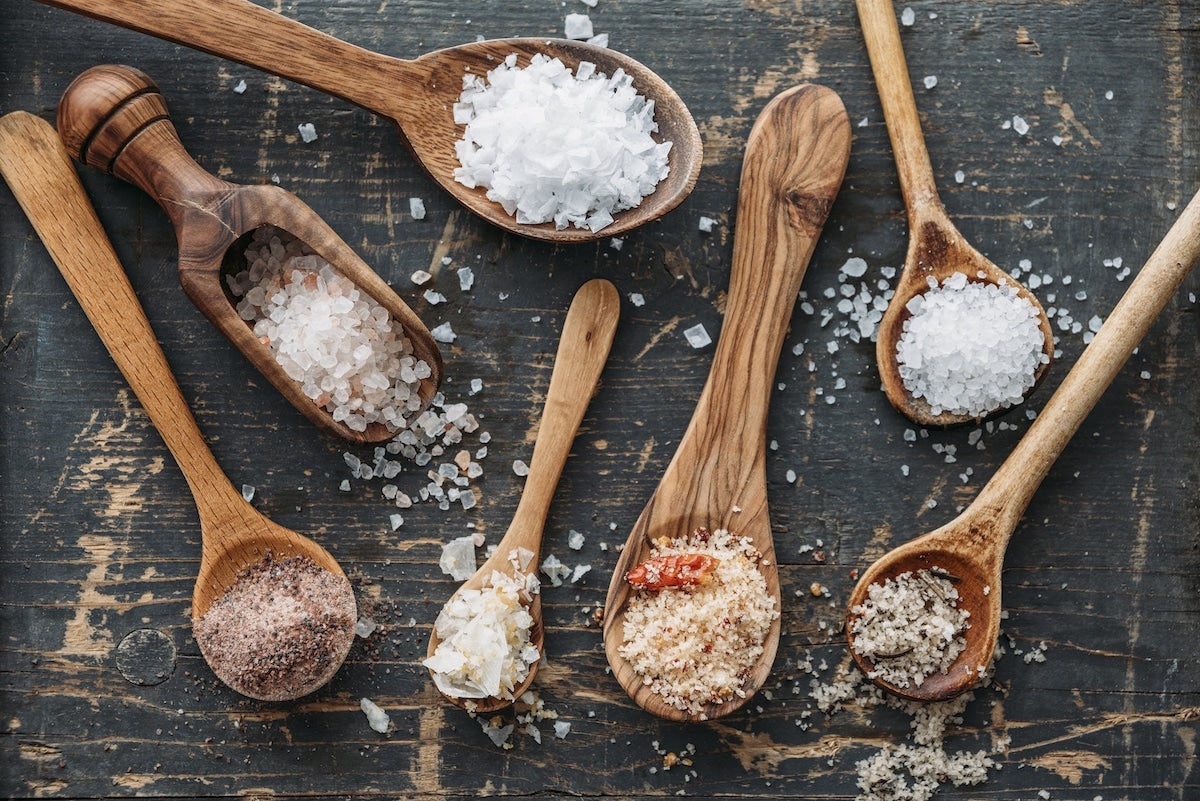 Salt has been used across the world for centuries as both a culinary seasoning and currency. Salt processing dates back to 6,000 BC in Romania. A 62-mile medieval route called the Old Salt Route stretches across Germany, where the salt trade became an empire. Some salt mining locations have also been used for centuries, and different kinds of salt have soared in popularity recently.

Superheated to 1,200 degrees Fahrenheit, table salt loses many beneficial compounds as it is also bleached with additives included for better sprinkability. Some experts also claim this high-refined salt and its use is linked with many sodium-related health issues. Iodine is added to table salt, but it is naturally occurring in specialty salts — one of the many upsides to trying different kinds of salt.

Sea salt comes from — wait for it — the ocean and contains natural iodine, though not as much as iodized salt. However, it’s less refined and available in both coarse and fine grinds. It’s made through the evaporative processes of salt water lakes or oceans and retains trace minerals, including calcium, magnesium and potassium.

Sea salt crystals are much larger than refined table salt. Keep this mind as you substitute it for regular iodized salt in recipes, reducing the amount by about half. Sea salt is tasty on homemade potato chips, salads, eggs, casseroles and desserts. Replacing table salt with sea salt is a great way to reduce your sodium intake if you use it moderation. You’ll still get “big taste” because of the crystal size.

Grey salt is also known as Celtic sea salt. Grey salt obtains its color from the clay from where it’s harvested. In Brittany, France, the sand and natural clay form mineral-rich crystals that are quite moist. These crystals are hand-raked and retain their natural moisture, but this also contributes to a higher cost. It’s a tasty addition to homemade chips, salads and soups.

Some people claim that Celtic sea salt benefits include alkalizing properties and electrolyte balancing. While The Independent reports that grey salt can potentially help lower blood pressure, little research is available surrounding the benefits of this particular salt. However, it has shown promise in inducing less hypertension in rats compared to refined salt, according to a 2016 study published in Food and Nutritional Research. Celtic sea salt contains 24 milligrams of iron in addition to being a significant source of sodium.

Another point of concern is microplastic ocean pollution as some commercial sea salts have been reported as polluted with microplastics in the past.

Some claim black salt makes a great digestive aid for traditional use. Himalayan black salt contains antioxidant properties which help fight free radicals in the body, according to a 2020 scientific analysis published in Science of the Total Environment. Researchers also noted that this black salt contains less salt than sea salt and Himalayan pink salt. It also contains calcium, magnesium and iron.

Red salt is also known as Hawaiian red salt or Alaea salt, taking its name and color from a volcanic Hawaiian clay called alaea. When water evaporates, salt becomes waylaid in tidal pools where it mixes with the clay and results in this red salt once harvested.

It’s speculated that red salt may contain the highest amount of trace minerals than other salts, especially rich in iron.

Imagine a salt compressed so tightly that refracts light completely different, producing a vibrant blue hue. That’s Persian blue salt, derived from an ancient salt lake in Iran. All these beautiful details also reveal themselves in the price tag as one of the rarest salts in the world for sale.

If you’re starring in a James Bond film any time soon and your role has you sipping on a margarita — this is the salt you use for the glass.

Persian blue salt benefits include common trace minerals and richer amount of potassium. Though a rock salt, it also has a slightly sweet taste at the finish.

Blue salt loses its hue the more finely it’s ground. It would work well as a finishing salt but is ideal for adding flavors to cooked vegetables and white meat.

Is It Good to Eat Salt Every Day?

Yes. Your body needs salt, but you should limit that to about a teaspoon of table salt for health reasons. Of course, sodium levels may differ per type of salt.

Your body uses salt to maintain a stable blood pressure, balance fluids in the blood and nurture nerve and muscle function, according to Harvard Health.

The FDA’s Dietary Guidelines for Americans recommends limiting sodium to almost a teaspoon of table salt each day or 2,300 milligrams of sodium in general. On average, Americans consume about 3,400 milligrams per day. Reference the Nutritional Facts label and ingredients list on natural salt products for guidance on sodium content.

No, but many people prefer natural and coarser salts for bigger taste and less sodium. It can be easier to manage. Some natural salts also contain higher amounts of trace minerals, as we’ve seen.

Using less processed and more naturally occurring salts may help curb excess sodium intake. Table salt is often iodized, and sodium is added to canned foods. As much as 40% of your sodium intake can be linked to pizza, deli sandwiches, soups, savory snacks and pasta dishes.

To keep sodium levels in a healthy range: