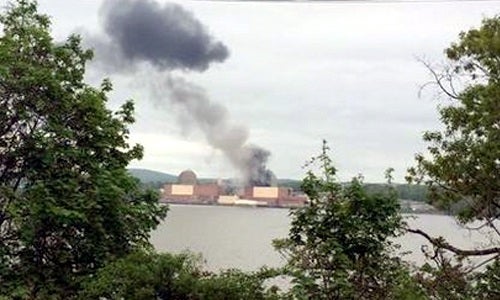 For the third time in a decade, a major fire/explosion has ripped apart a transformer at the Indian Point reactor complex.

News reports have taken great care to emphasize that the accident happened in the “non nuclear” segment of the plant.

Ironically, the disaster spewed more than 15,000 gallons of oil into the Hudson River, infecting it with a toxic sheen that carried downstream for miles. Entergy, the nuke’s owner, denies there were PCBs in this transformer.

You can choose whether you want to believe the company in either case.

But PCBs were definitely spread by the last IP transformer fire. They re-poisoned a precious liquid lifeline where activists have spent decades dealing with PCBs previously dumped in by General Electric, which designed the reactors at Fukushima.

Meanwhile, as always, the nuclear industry hit the automatic play button to assure us all that there was “no danger” to the public and “no harmful release” of radiation.

But what do we really know about what happened and could have happened this time around?

At an integrated system like a reactor complex, are there really any significant components whose impacts are totally removed from the ability to touch off a nuclear disaster?

A “non nuclear” earthquake, 120 kilometers away, caused Fukushima One to melt, and then explode. “Non nuclear” backup power sources failed after being flooded by a “non nuclear” tsunami, leading to still more melt-downs and explosions. “Non nuclear” air crashes, either accidental or as at 9/11, or bombs or terror attacks could rapidly convert Indian Point and any other commercial reactor into an unimaginable nuclear disaster.

At Indian Point, “non nuclear” gas pipelines flow dangerously close to highly vulnerable reactors. In an utterly insane proposal that almost defies description, corporate powers want to run another gas pipeline more than 40 inches in diameter within a scant few yards of the reactor epicenters. An explosion that could obliterate much of the site would of course be “non nuclear” in origin. But the consequences could be sufficiently radioactive to condemn millions of humans to horrifying health consequences and render the entire region a permanent wasteland. Indian Point, in Buchanan, New York, is about 45 miles north of Manhattan.

The real dangers of this most recent fiasco are impossible to assess. But Indian Point sits all-to-near the “non nuclear” Ramapo seismic fault line which is more than capable of reducing much of it to rubble. Twice now—in Ohio and Virginia—earthquakes have done significant damage to American reactors. With 20 million people close downwind and trillions of dollars worth of dense-packed property, a Fukushima-scale hit at Indian Point would easily qualify as an Apocalyptic event.