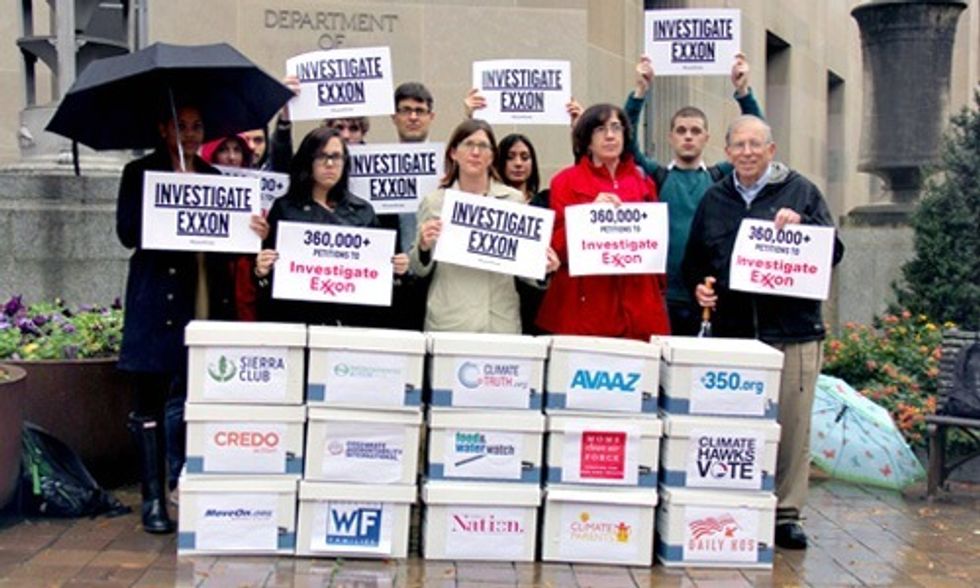 Viewers were treated to a rare moment of candor at the end of a recent PBS NewHour interview with Kenneth Cohen, ExxonMobil's vice president of public and government affairs.

NewsHour host Judy Woodruff pressed Cohen about an accusation New York Attorney General Eric Schneiderman made during a taped interview that aired just before Cohen's segment. Schneiderman—who had announced the week before that he was investigating ExxonMobil over whether it had misled the public and shareholders about climate change risks—had charged that ExxonMobil funds climate change denier organizations to malign mainstream climate science.

"Has Exxon been funding these organizations?" she asked.

"Well, the answer is yes," Cohen replied. "And I will let those organizations respond for themselves."

Putting aside the fact that no one from any of the denier groups was on the program, Cohen's admission is noteworthy because technically "has been funding"—which, grammatically speaking, is in the present perfect progressive tense—describes an action that began in the past and continues in the present.

To avoid any doubt, it would have been helpful if Woodruff had used the present tense—as Schneiderman did—and had asked if ExxonMobil is funding these groups. Ambiguous or not, Cohen's statement still calls into question recent assertions by Richard Keil, ExxonMobil's senior public affairs adviser, that the company is no longer funding them. And second, it would appear to contradict a claim the company had stopped funding denier groups that Cohen himself made eight years ago.

In any case, as I spelled out in a July blog post, no matter how Cohen or Keil answer the funding question, it's an indisputable fact that ExxonMobil has been—and still is—a leading sponsor of think tanks, advocacy groups, trade associations and contrarian scientists that peddle lies about climate science and the viability of renewable energy. Only the billionaire brothers Charles and David Koch, owners of Koch Industries, have spent more on the climate disinformation network.

Equally interesting was Cohen's attempt to dismiss the funding question. In so many words, he told Woodruff that although ExxonMobil may have financed climate science denier groups, the groups are ultimately responsible for their anti-science message, not ExxonMobil.

That response may well signal that ExxonMobil plans to use this legal tactic to counter the charge that it financed a massive climate change disinformation campaign. It would certainly make sense for the company to plant seeds of doubt about its responsibility. After all, hasn't its modus operandi all along been to emphasize uncertainty?

The NewsHour interview with Cohen came on the heels of a string of public relations disasters for ExxonMobil. The first came in July, when the Union of Concerned Scientists (UCS) released a report documenting that ExxonMobil and five other top carbon polluters—BP, Chevron, ConocoPhillips, coal giant Peabody Energy and Royal Dutch Shell—were fully aware of the reality of climate change for decades but spent tens of millions of dollars to promote contrarian arguments they knew to be false. UCS also uncovered evidence that Exxon had been factoring climate change into its oil and gas extraction plans as early as 1981—much earlier than anyone had realized and years before there was much public awareness of the problem.

Since then, two news organizations have published a series of articles that fill out the details of what Exxon scientists knew and when they knew it. Both InsideClimate News and the Los Angeles Times dug up evidence from company archives and interviews with former employees showing that Exxon, a leader in climate research in the 1970s and 1980s, became one of the most ardent climate science deniers, rejecting the warnings of its own scientists that the consequences of global warming could be catastrophic.

Partly due to these revelations, several members of Congress, Democratic presidential candidates, and more than 60 leading environmental, science and social justice groups (including UCS) have called for the Justice Department to investigate ExxonMobil for deliberately deceiving the public, much in the same way the tobacco industry lied about the link between smoking and disease. And then, on November 4, Schneiderman launched his criminal investigation to determine, as he told PBS NewsHour, whether Exxon was "using the best science and the most competent [climate] models for their own purposes, but then telling the public, the regulators and shareholders that no competent models existed." If that's the case, he said, the company could be guilty of fraud.

Cohen and other ExxonMobil officials, including CEO Rex Tillerson and the aforementioned Richard Keil, hit back with a flurry of press releases, newspaper columns, TV and radio interviews, and tweets. Right out of the box, they attacked the credibility of InsideClimate News and the Los Angeles Times, calling them "activists" and mischaracterizing their reporting.

"Activists deliberately cherry-picked statements attributed to various company employees to wrongly suggest definitive conclusions were reached decades ago by company researchers," Cohen said in an October 21 press release, for example. "These activists took those statements out of context and ignored other readily available statements demonstrating that our researchers recognized the developing nature of climate science at the time, which, in fact, mirrored global understanding."

In fact, both news organizations did report there were differences of opinion among Exxon scientists early on. As InsideClimate News put it, company researchers "acknowledged the uncertainties surrounding many aspects of climate science." By the early 1980s, however, internal documents show that company scientists had concluded that rising carbon dioxide levels in the atmosphere could have catastrophic consequences within the first half of the 21st century if fossil fuel emissions weren't significantly reduced. It was later in that decade when the company turned a deaf ear to what its scientists were saying, presumably because it feared heightened awareness about climate change could lead to government controls on carbon emissions.

That's just what a number of key Exxon researchers did from then on, turning their backs on their previous work. As InsideClimate News characterized it, they "became vocal climate contrarians" and ridiculed IPCC findings.

In the 1990s, Exxon participated in the Global Climate Coalition (GCC), an alliance of more than 60 U.S. and British corporations and trade groups formed in 1989 to thwart international and domestic efforts to address global warming by, you guessed it, emphasizing scientific uncertainty.

By end of the decade, however, Exxon and other key GCC members began enlisting the help of a number of think tanks that had been surreptitiously assisting the tobacco industry in its fight against tighter controls on smoking. Why? To hide their fingerprints. Exxon, which quickly proved to have the deepest pockets—at least until the Koch brothers surpassed it in 2005—kicked off its spending spree on these think tanks and other nonprofit advocacy groups in 1998, a year before it merged with Mobil and Kenneth Cohen became the company's VP for public and government affairs.

In January 2007, UCS issued a report that revealed that between 1998 and 2005, ExxonMobil had spent at least $16 million on a network of more than 40 anti-regulation think tanks and advocacy groups to launder its message. A few weeks later, when asked about the report by a Greenwire reporter, Cohen said ExxonMobil had stopped funding them.

That claim is as preposterous today as it was eight years ago. Just last year the company spent $1.9 million on 15 climate science denier groups, including the American Enterprise Institute, American Legislative Exchange Council, Manhattan Institute and U.S. Chamber of Commerce, and 10 of last year's grantees were among those cited in UCS's 2007 report. All told, Greenpeace has documented that ExxonMobil has spent $31 million since 1998 on denier groups, but there is good reason to suspect that's not even the half of it. A former highly placed ExxonMobil executive who requested anonymity told UCS that the company paid out as much as $10 million annually on what insiders called "black ops" from 1998 through 2005, significantly more than what UCS was able to pin down in its 2007 report from company tax records.

So what should we make of Cohen's apparent admission on PBS NewsHour about ExxonMobil's role in the climate-denial funding game? Well, Cohen may not be much of a grammarian, but he is top-notch lawyer who worked for 22 years in Exxon's legal department before becoming VP for public affairs. As noted above, Cohen was likely taking a new tack designed to shield ExxonMobil from blame for the climate disinformation campaign. Lawyers call it "plausible deniability." ExxonMobil may have paid denier groups for their services, the argument goes, but those groups are solely responsible for their actions.

Legally proving a quid pro quo may be difficult, but at least one prominent denier-group funder has spoken candidly about the power such funding entails. In Brian Doherty's 2007 book, Radicals for Capitalism: The Freewheeling History of the Modern American Libertarian Movement, David Koch put it plainly. "If we're going to give a lot of money, we'll make darn sure they spend it in a way that goes along with our interest," Koch said. "And if they make a wrong turn and start doing things we don't agree with, we withdraw funding. We do exert that kind of control."

Cohen can trot out the "plausible deniability" line all he likes, but there is little doubt that ExxonMobil has exerted that kind of control, too.

The big question is, are ExxonMobil's actions illegal?

The Washington Post doesn't think so. It ran an editorial on Nov. 14, Exxon deserves criticism, but it didn't commit a crime. Syndicated columnist Robert J. Samuelson doesn't think so, either. A week before the Post editorial, he wrote a column maintaining that ExxonMobil is being vilified for "expressing its opinions," which deserve protection. For Samuelson, the company is exercising its constitutional right of free speech.

Attorney General Schneiderman obviously thinks they might be, hence his investigation. "In New York," he told PBS NewsHour, "we have laws against defrauding the public, defrauding consumers, defrauding shareholders." And, it goes without saying, there is no legal protection for fraud.

Rhode Island Sen. Sheldon Whitehouse, a former prosecutor, thinks they might be, too. "The revelation that Exxon knew about the link between climate change and carbon pollution as early as 1981 and yet continued to support decades-long campaign of denial described in the [July] UCS report, strengthens the parallel with the tobacco-industry conduct that led to a civil [Racketeer Influenced and Corrupt Organizations Act] verdict against tobacco," Whitehouse told The Nation in July. "Whether [the Justice Department] pursues this or not is their call, but if nothing else, the UCS report shows these are legitimate questions to ask."

Sharon Eubanks, a former Justice Department lawyer who prosecuted the racketeering case against the tobacco industry, also has called for a federal investigation. "It appears to me, based on what we know so far, that there was a concerted effort by Exxon and others to confuse the public on climate change," she said in an October 20 interview with Climate Progress. "They were actively denying the impact of human-caused carbon emissions, even when their own research showed otherwise."

In any case, absent a full investigation, it would be premature draw to any conclusions about the legality of ExxonMobil's conduct. At this point, we don't know. What we do know is, in light of the evidence uncovered by UCS, InsideClimate News, the Los Angeles Times and others, investigations of whether ExxonMobil violated any state or federal laws are undoubtedly warranted.

Another Historic Day in the Battle to Stop the Tar Sands