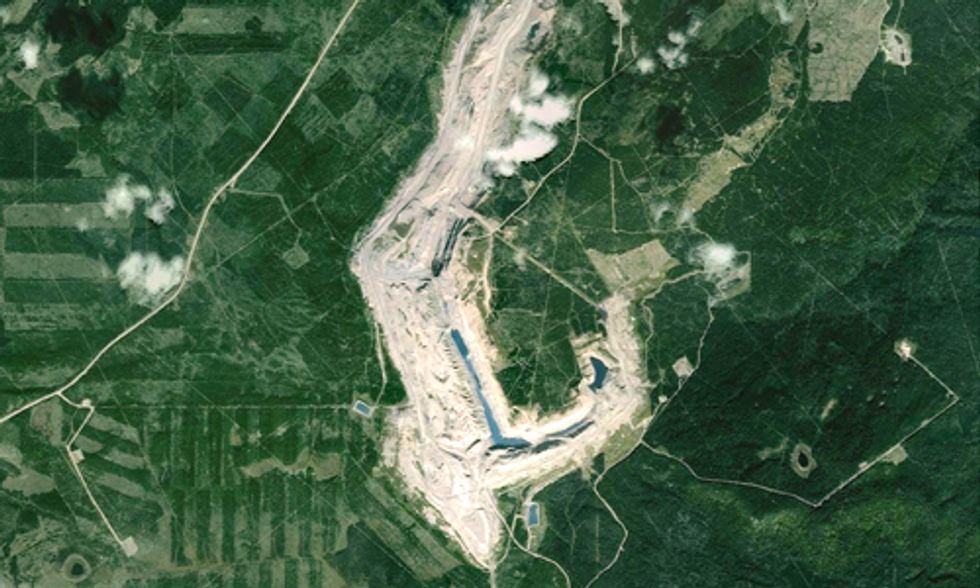 A scary thing happened on Halloween near Hinton, Alberta. Canada had what may be the largest coal slurry spill in its history when a dam failed at the Obed Mountain coal mine and 264 million gallons (1 billion litres) of waste water contaminated at least 25 kilometers of the Athabasca river. Ten municipalities located downstream of the spill were warned not to withdraw raw drinking water from the Athabasca river until it was deemed safe. Residents were also warned not to let their animals drink water from the river.

The federal government dispatched officials from Environment Canada as well as Fisheries and Oceans Canada to investigate whether violations of the Canadian Fisheries Act occurred as a result of the massive dam failure and subsequent contamination of the Athabasca River. Critics are beginning to lash out at the government response. Rachel Notley, a Legislative Assembly representative and lawyer wants to know why it took five days for the Alberta provincial government to issue warnings to communities downstream. Others are concerned about conflicting government statements that the spill was relatively harmless. They say if the spill was harmless, why were they warned not to use the Athabasca River as a source of drinking water for municipalities and livestock?

“For the communities living downstream with years of toxic waste, this coal slurry spill is adding to the cumulative effects they are left to deal with," said Jesse Cardinal, coordinator for the Keepers of the Athabasca. "Fort Chipewywan recently got a new water treatment system which is to be one of the best in North America, and even still, after hearing of this coal spill, are once again, starting to fear drinking the water.”

Two days after the spill, the Alberta Environment spokesperson Robyn Cochrane said in this Global News Canada interview, “Initial water samples are currently being analyzed by independent labs and will be reviewed by Alberta Health Services and Environment and Sustainable Resource Development staff. Once we have these results, we will make them public.”

"If, as the vague Alberta Government statements claim, the tailings are 'harmless to health' why are they unwilling to share them with their citizen shareholders. If they are only 'coal dust' then show us the data." said Harvey Scott, director of the Keepers of the Athabasca.

"We are concerned that the tailings ponds may contain such things as high concentrations of selenium which can be very toxic for native fish reproduction. The stream that transferred the pond effluent to the Athabasca is a known fishery for several important native species. Will its reproductive capacity be seriously affected? Settling pond flocculants can be deleterious to fish reproduction - has that been assessed? Indigenous peoples and other Canadians depend upon these fisheries to provide them partial livelihoods and recreational fishing. How will this tailings release affect that? The Keepers of the Athabasca and other Athabasca River Basin residents expect their governments to protect their ecosystems. We demand to see the actual sampling data. What do they and industry have to hide if in fact the effluent is 'harmless' as their press spokespeople say. Just give us the data."

Release of the water test results are critical since it would appear the Obed Mountain coal slurry spill is one of the largest in North American history. The U. S. government coal impoundment location and information system has a comprehensive list of the historical coal slurry spills from coal mines in the U.S. Here is their list of the top five coal spill disasters:

When compared to these large spills, the spill in Alberta is the second largest. There have been other coal slurry spills in Canada recently, like a small 6,000 gallon coal slurry spill into the Similkameen River two months ago near Princeton, British Colombia. Locals there were very upset that it took days for the mining company to inform them of the spill.

Given the magnitude of Alberta spill, the lack of information provided by Alberta Environment is very troubling. In the wake of the spill, the Edmonton Journal has done the best job investigating and reporting information about the monumental spill and the government response. To its credit, the Edmonton Journal has repeatedly asked Alberta Environment to live up to its Nov. 2 promise to release water test results. And yet none of the data has been made public.

In the large multi-million gallon coal slurry spills in the U.S., there was substantial contamination of the rivers and streams with a toxic stew of pollutants including polycyclic aromatic hydrocarbons and heavy metals. These spills killed people, damaged property, caused fish kills and long-term damage to aquatic ecosystems that lasted years after the spills.

Because the spill in Alberta is one of the largest in North American history and possibly the largest in Canadian history, it is imperative for the Canadian Government to do a full, open and transparent investigation. The fact that the water sample results have not been reported as promised is cause for concern. Does it signal the beginning of a toxic cover up similar to what happened with the largest coal slurry spill in the U.S.?

There are a lot of unanswered questions about the spill in Alberta. For example, what was the timeline of the emergency response by both the coal company and the Canadian government? How long did it take for the spill to be reported and when did government investigators first arrive on the scene? According to reports from Alberta, the massive coal slurry pond was completely drained before government officials responded.

How much time elapsed between the first report of the spill and the deployment of emergency response assets to initiate containment and clean up? For a spill of this magnitude, the coal company should have immediately deployed every available asset to contain the spill to try and prevent waste water from leaving their property, polluting two tributaries and reaching the Athabasca River. Did that happen and when? And if it did, why weren't containment efforts successful? Why was the Athabasca River polluted with coal slurry waste many, many miles downstream of the spill site? What caused the dam to fail and when was it last inspected?

As the satellite image shows below, there are many coal waste ponds at the massive 20 square kilometer Obed Coal mine site. Which one failed? Are any of the other dams slumping, leaking or showing signs of failure?

This is an internationally significant news story. Alberta Environment should stop stonewalling and release information about the impact of the spill. If it doesn’t, it is incumbent upon the Canadian Federal Government to step in and do a full, open and transparent investigation.

"The Athabasca River is a Canadian Heritage River and one of Alberta's most significant because of it's historical, cultural and ecological value," said Glenn Isaac, executive director of North Saskatchewan Riverkeeper.

"Ask any angler, canoeist or hiker who has experienced this area of the Athabasca River. You'll find out that this river has an abundance of fish, clean mountain waters and other natural gifts that are now threatened. The ecological importance of the Athabasca River near our Jasper National Park, cannot be overstated. Riverkeeper will continue to monitor the investigation currently underway," said Isaac.

"The Fisheries Act exists in Canada to safeguard our environment from accidents of this nature. When accidents happen, the Fisheries Act carries serious penalties which must be enforced to punish the polluter and deter similar events in the future," said Mark Mattson, president of Lake Ontario Waterkeeper. "We will be watching the Department of Fisheries and Oceans' investigation very closely to ensure our laws are given meaning and force to keep our waters swimmable, drinkable and fishable."