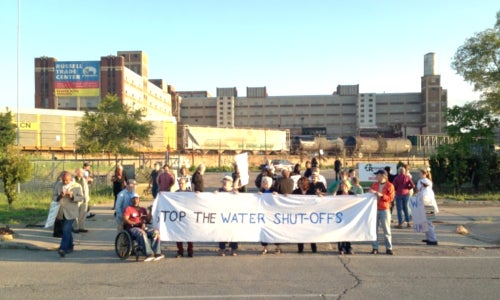 Though officials say they aren’t backing down to pressure from protesters and other activists, Detroit announced Monday morning that it will suspend its water shutoffs for 15 days.

The Detroit Water and Sewerage Department (DWSD) turned off water service on about 17,000 customers since March, according to The Detroit News.

“This is a pause. This is not a moratorium,” department spokesman Bill Johnson told the publication. “We are pausing to give an opportunity to customers who have trouble paying their bills to come in and make arrangements with us. We want to make sure we haven’t missed any truly needy people.”

Others don’t buy that, and are convinced that pressure from the United Nations, the Detroit Water Brigade, Michigan Welfare Rights Organization and others played a role in the suspension.

Maybe the protests were heard: Water shutoffs in Detroit have been suspended for 15 days. http://t.co/3Bh9dqKa2X

They stopped the water shut offs in Detroit for 15 days. If you were in any way a part of this struggle. You know how big of a feat this is

About 89,000 customers owe about $91 million to the department, Johnson said. More than 2,000 residential accounts had service cut off in the first two weeks of this month.

“Looking forward, we call on the DWSD to indefinitely suspend all residential shutoffs, restore service to those families already turned off, and immediately begin work to implement an income-based Water Affordability Plan,” the Detroit Water Brigade said in a statement. “The DWSD should also hold a week-long public event at Cobo Hall, with extended hours for working people, to give Detroiters an opportunity to enter into flexible payment plans based upon their ability to pay.”

The announcement came as some residents filed a complaint in U.S. Bankruptcy Court in Detroit. Part of their complaint is that city came down on low-income residents while not shutting off past-due commercial accounts, Bloomberg reported.

“Water service to private residences is the most basic and essential utility service, and is necessary for the health and safety of the residents,” the filing states.

Wenonah Hauter, executive director of Food & Water Watch, says the suspension is positive news, but should be followed up with an evaluation of how DWSD views access to water.

“We are glad the Detroit Water and Sewerage Department has announced it will suspend water shutoffs for 15 days to allow residents to demonstrate their inability to pay,” she said in a statement. “But this is only a small step toward rectifying the problem in Detroit.

“DWSD must take this time to fundamentally reconsider its use of draconian water shutoffs as a means of strong-arming residents who cannot afford to pay their water bills. It must also turn back on the water of those households that have had their water service shutoff.”